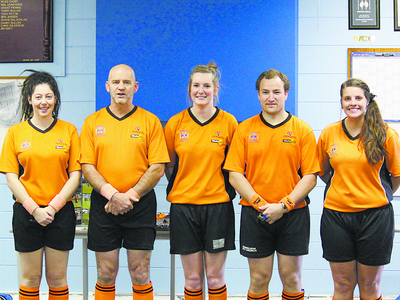 Starting in 2004, Rachel has progressed through the ranks umpiring under 12s, 14s and 16s within the Traralgon and District Junior Football League for the last nine seasons.

She had 200 games in sight at the end of 2011 but suffered an ankle injury and was forced to postpone her goal until this year.

Beginning the new season with only six games needed, she managed four before an injury to her other ankle sidelined her again.

With determination and fitness on her side Rachel made sufficient recovery in time to participate in the first Victorian Country Football League school holiday program for aspiring young umpires wanting to progress to Australian Football League level in their chosen discipline.

Here she was able to work with AFL umpire coaches, fitness coaches, sports dietician and other umpires to improve her umpiring skills and knowledge.

Shane McLachlan, who was the Traralgon Umpire Association president when Rachel first joined, returned for the special occasion of her 200th game and officiated as field umpire with the current president, Adam Bermingham.

Rachel was supported by fellow female umpires Emily Ogden and Brooke Pettie in attending to boundary umpire duties for the under 16 Combined Saints versus Police Boys game.

Rachel’s dedication and enthusiasm makes her the youngest person and only female to reach the milestone of 200 games with the TUA.

She now plans to expand her own skills by umpiring at a senior level with Latrobe Valley Umpires while continuing with training and mentoring those starting out in umpiring at the TUA.