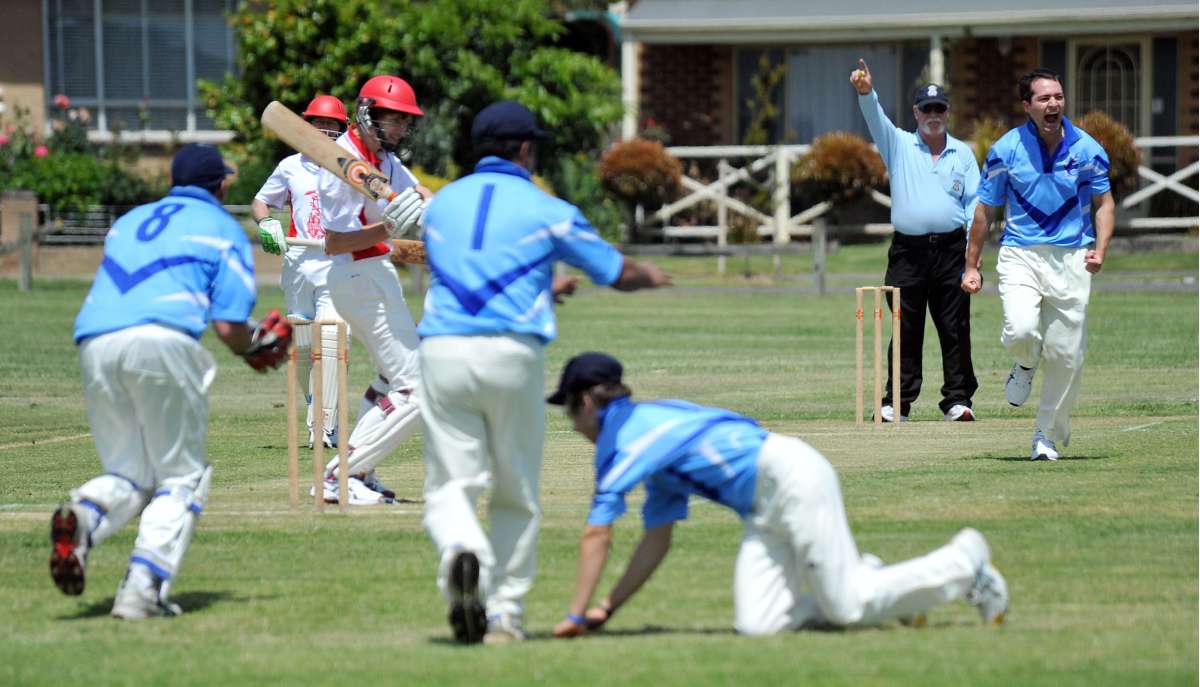 MORWELL maintained top place on the Energy Australia Yallourn Cup ladder with a convincing 84-run win over Yallourn North at home on Saturday.

Blake Mills was the most impressive of the Morwell bats with a fine 64 and was supported by sound innings from Tom Crosby (35) and Rob Semmler (27).

Mills and Crosby shared a fifth wicket partnership of 68 in a score of 162.

Brandon Bailey with 4/42 and Glen Sheekey with 3/36 were the best of the Bombers attack and when Luke Nelson dismissed Mills Morwell lost its last five wickets for 10 runs.

Yallourn North’s bats were disappointing and managed 83 off 36.3 overs with Nelson top scoring with 25.

Brent Reside continued his good form with the ball and took 3/7 off eight overs while Mark Cukier and Brandon McDonald took two wickets each.

LATROBE had a comfortable win over Trafalgar and gained valuable bonus points by sending the Ships into bat for a second time.

Sent into bat the Ships openers found it hard to judge the pace of the ball on a soft wicket.

John Asmussen carried his bat for 35 and Jackson Noonan made 10 after top edging Anthony Bloomfield to Mitchell Cowell at square leg.

Bloomfield struck again when Aphale took a smart catch in slips to get rid of Scott Moorhouse for a duck.

Jamie Brierly cleaned up the tail in the first innings taking 3/13 off five.

Daniel Siddle and Rob McKinley got the Sharks away to a great start with a 68-run opening stand before Siddle was trapped in front by Klay Butler.

Kaushik Aphale joined McKinley and the Irish teammates added 70 before declaring at 1/138 after 26 overs and sent Trafalgar back into bat for 27 overs.

Mitchell Cowell took three of the seven wickets to fall and the Ships held on to be 7/55 at stumps with Asmussen unbeaten for the day on 14.

MOE tasted victory for the first time this season with a 68-run win over Newborough Bulldogs thanks to Dale Walshe (58) and Jayden Mathison (34).

The Bulldogs batted first and were restricted to 70 with John James taking 4/14. Sam Price and Rob Phoenix took two wickets each and the father and son combination of Matt and Nick Clarke took one wicket each.

Nathan Simpson top scored for the Bulldogs with 23.

Mirboo North had the bye.

Trafalgar put up a great performance in second grade against a strong St Vincents side but went down by 15 runs.

With seven juniors in the side, three of them aged between 10 and 12, they were not disgraced.

Blair’s father, Mark Wynne, was the rock in the batting making 70 while Liam’s father Craig opened the bowling with Burgess to take 2/23 off 10 overs.

Rawson was too strong for Hazelwood North with Paul George taking 5/34 for the Kookaburras and Nathan Lee made 40. Mirboo North had Jimmy Watson down from first grade who hit form with 76 to lead his side to victory against Morwell who managed 97.