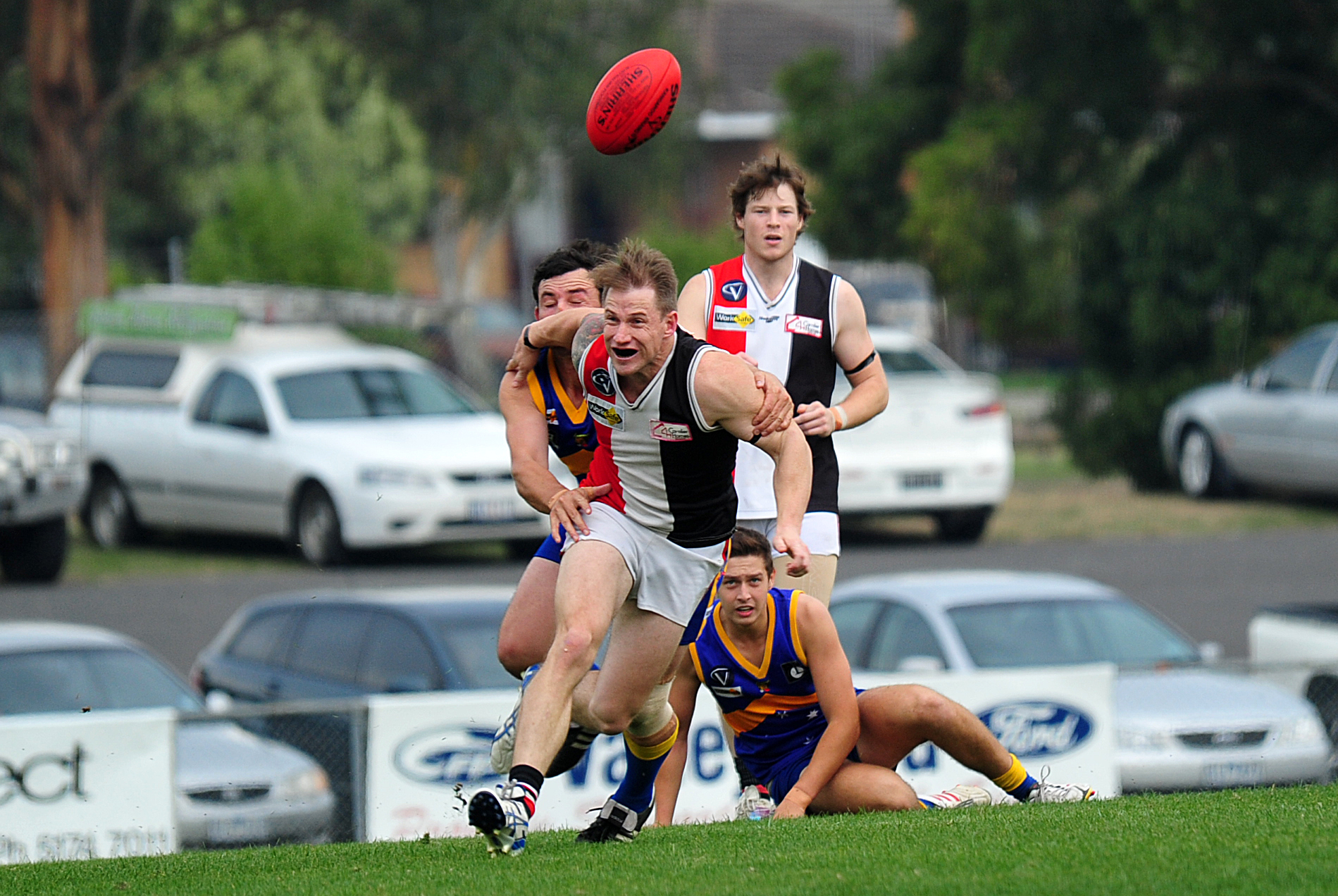 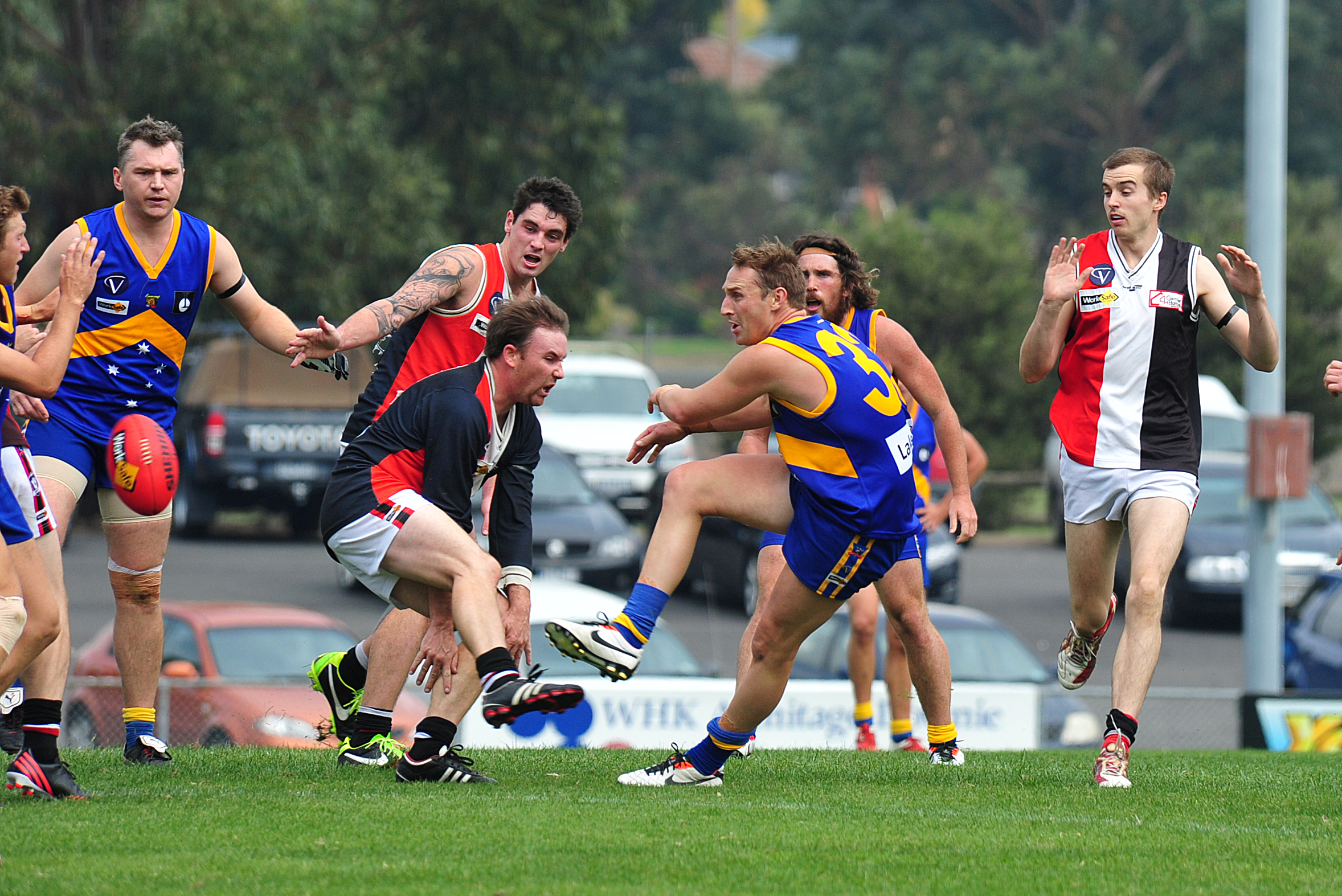 YESTERDAY’S blockbuster grand final rematch between reigning premiers Heyfield and last season’s powerhouse Rosedale lived up to all expectations when the Blues prevailed in an opening round tug of war contest.

The Blues marked their intentions early slotting through the opening goal of the match through Andrew Flanagan at the two minute mark before hurting Heyfield in a physical 10 minutes of football.

With a host of senior players missing, the Blues stood tall early against their highly fancied opponents.

Flanagan made it two on the trot after a strong grab 20 metres from goal, before play went back and forth between the two half backlines.

Three consecutive behinds from the home side let the Blues defense off the hook as the Kangaroos’ small crumbing forwards’ pressure ensured they kept the ball in their forward 50.

Heyfield finally got the breakthrough goal, drilling the ball from the back line through the middle of the ground to register their first major.

The celebrations were short lived as Brad Caldwell added Rosedale’s third ahead of quarter time to level scores.

The scoring dried up before a stellar individual effort from Rosedale’s Brad Taylor.

Tight on the boundary line and deep in the pocket, the dynamo midfielder snapped true.

It went goal for goal as Wellins added another to his tally of four, before Flanagan goaled to put the Blues back in front.

A purple patch from Diamond saw him amass a mountain of possessions; his hard work in and around the packs awarded Flanagan another as the Blues took an 11-point lead into half-time.

Rosedale made it two on the run through Nic Rutter and Taylor as they looked to run away with the game in the final quarter.

The Kangaroos challenged first through Wellins and then Matt Goodwin but could not match the Blues in the final stages of the contest, going down, 13.4 (82) to 9.19 (73).

The new breed of Wildcats starred in Woodside’s win over Boisdale/Briagolong, handing new coach Chris Pettitt the perfect start to the season.

The two sides fought out a tight contest in the opening half with the Bombers trailing the visitors by less than two kicks at half time.

It became a David and Goliath battle after the long change when the visitors, through Justin Staley, caused havoc with a barrage of nine majors for the second half to cruise home 35 point victors.

Rob Michaelides and Staley provided headaches for the Bombers’ defense kicking 10 majors between them in a stellar performance in front of goals, while Adrian Fazoli and Hank Norman were solid contributors in a strong team effort.

After missing last year through injury, Bomber Adam Helmke was a standout, while new recruits Justin Shears and Josh Kennedy made an impact in their first match for the red and black.

Trailing for the majority of the contest, a new look Sale City rallied to come from behind in a sterling final quarter effort against Glengarry.

After leading at every change, the Magpies looked poised to start the season on the front foot, before a five goal to two last quarter saw the Dogs hunt them down.

Caught flat footed, the Dogs dragged the chain as the Magpies extended the margin at each change.

The charge on the scoreboard was led by best on ground Josh King and Aaron Winkler, who booted three apiece, while Dean Brooks and Chris Panayiotou dominated the contests against their less experienced opponents.

GORMANDALE copped the full brunt of Traralgon Tyers United at its bruising best.

The Bombers unleashed their new recruits and provided spectators with an indication as to just how well the side has evolved in the off season.

The Bomber line-up came to life as they dominated play around the ground in a blistering 20 minutes of football, hitting the ground running with Michael Hall and Rhys Martin leading the charge.

The visitors burst out to a handy 28 point lead at the first change of ends.

The Tigers clawed their way back into the contest to trail by three goals at the main break as veteran Wayne Henry imposed himself in front of goals.

Through best on ground Daniel Domaille, the Tigers worked hard to remain in the contest but could do little to eat into the Bombers’ three quarter time buffer.

The match was evenly poised at the first change; both sides’ desperation on the ball was evident but the Cougars took a nine point lead to the break.

The home side exploded out of the blocks in the second term, and their solid quarter put the Saints 34 points behind at the main break.

Churchill’s momentum was not halted by the long change as they added a further nine goals in a stellar second half.

Powerhouse Cougars forward Brendan Holt was the main figure in front of goals, setting the impetus for victory with an individual haul of eight majors. Travis Brighton was a valuable contributor for the home side, captain Chris Williams and ball magnet Brandon Mahoney worked tirelessly around the ground while the presence of the tall Chris Burke was telling.

Boasting 12 scoring shots to four in the third term, the Saints’ key forwards squandered opportunities in front of goal and their wayward kicking kept the visitors out of the contest. Jordon Sandy led from the front in a best on ground performance for the losing side.