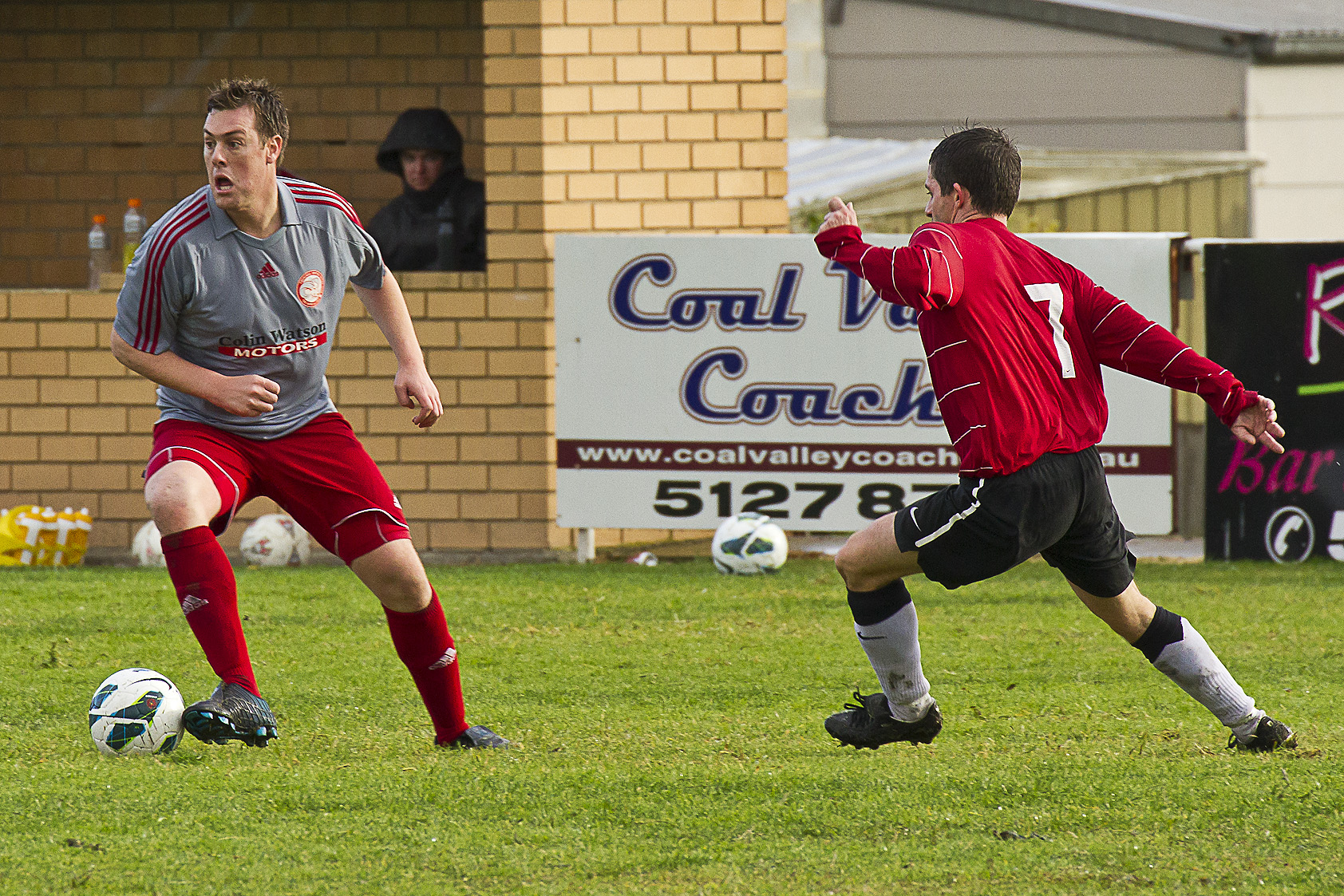 PRIDE was on the line in Gippsland Soccer League’s rivalry round at the weekend, with some heated battles staged in the top flight.

TENSIONS would have been high leading into the Newborough derby after Ty Christy joined Monash from Newborough Yallourn United midweek.

The score was locked at 0-0 at half-time with both sides resorting to long range efforts.

The game came alive midway through the second half when Ash Birrell stole the ball from Jayden Shaw in the penalty area before placing a deft chip past the oncoming Damian Gilbert in goal to put Monash ahead.

Christy nearly marked his debut with a goal but his left footed volley was turned over the bar by Gilbert.

NYU spurned a gilt-edged chance to equalise with 10 minutes remaining; Heydan Cook’s strike was parried into the path of Jon Cook, who sent the rebound high and wide.

The visitor was awarded an indirect free kick inside the box in injury time, but Monash cleared Chad Shelley’s effort.

SALE was keen to make amends for its shock loss to Traralgon City last week and continue its strong home form.

An understrength Sale side was made to work for their result and failed to find the back of the net in the first half; they hit the woodwork and were denied a goal by the offside flag.

In form veteran striker Jon Piefke broke the deadlock playing at centre back which opened the floodgates.

THE Traralgon tussle was an intense affair with both sides in need of three points to threaten the top four.

The game started at a frantic pace with a penalty awarded to City within the first minute of play, which it converted to take an early lead.

The home side pushed and retained solid possession for the next 10 minutes which resulted in Olympians squaring the ledger via a coolly slotted penalty from Frank Albanese.

Traralgon City looked to use its pace early in the second half but Olympians was up for the fight and won a free kick in its attacking half.

Coach Anthony Pardotake placed the set piece perfectly onto the head of striker Andres Nilo who provided a class finish.

City attacked the game with purpose, making tactical changes in the hunt for an equaliser but was shut out by a determined Olympians outfit, which held on to win 2-1.

Churchill United earnt a valuable point on the road at Moe to retain top spot on the GSL ladder after a 0-0 draw on Sunday.

The Red Devils were coming off successive defeats to top four company, but was bolstered by the inclusion of playmaker Marc McHallam.

Moe earnt a succession of corners and free kicks in the first half to put the Rams under constant pressure.

Their best effort came from coach Lee Dastey whose shot was just turned around the post by a full stretch diving save from Churchill keeper Jason Sands late in the half.

The Rams looked to have a winner when prolific striker Paul Riess struck at goal, but Red Devils custodian Peter Albanese was equal to the task.

After a back and forth battle, the final score remained 0-0.

FALCONS was positioned to claim a rare league win over cross-street rival Fortuna following its upset win over Moe, while Fortuna was down after a loss to Monash.

Both teams began the match in attack mode, but defence held firm at either end of the pitch. A goal from a corner set piece after 20 minutes put Fortuna in the box seat, and eight minutes later they had a second from another corner put away by Matt Coward.

Fortuna coach Dave O’Dowd then hit a low thunderbolt from 30 yards but struck the upright as Falcons battled hard to stay in the contest.

Just before the break Joel Pirotta whipped a fine cross to the back post for Kenny Higgins to head home the third Fortuna goal.

The second half was a more even contest but Fortuna added another through Josh Tanti who clinically drilled the ball into the top right corner from 18 yards at the 75 minute mark.

THE fiercest modern day rivalry in the GSL will erupt on Saturday night when Churchill hosts Fortuna.

Fortuna sits fifth and must win to break into the top four, while the Rams need points to maintain a gap over Sale United two points back.

The corresponding fixture last year saw Fortuna score an upset 2-1 victory when the side was decimated by injuries.

THE key to this match will be in the middle of the park with both sides boasting experienced players who can dictate the run of play.

Tyers will have to contain the ever-improving Olympians attack on home turf.

Olympians need to pick up three points to continue to push for a top four place.

THE Combine is set to host Sale as the Swans look to snare the ladder lead from Churchill. The Swans could find themselves on top if the Rams fall to Fortuna and should account for NYU on Sunday.

THESE two sides could not be separated in 2012 with draws in both clashes. With Monash sitting in fourth place on the ladder and Falcons sixth, this promises to be a close match with the stakes increasing each week.

AFTER letting the game get away on Sunday, Traralgon City will be desperate for redemption.

Moe will be buoyed by its draw with the Rams, which put an end to its run of losses in recent weeks.

With one win each last year, the experience of the Red Devils this year should prove too much for the young Roosters on their home turf.