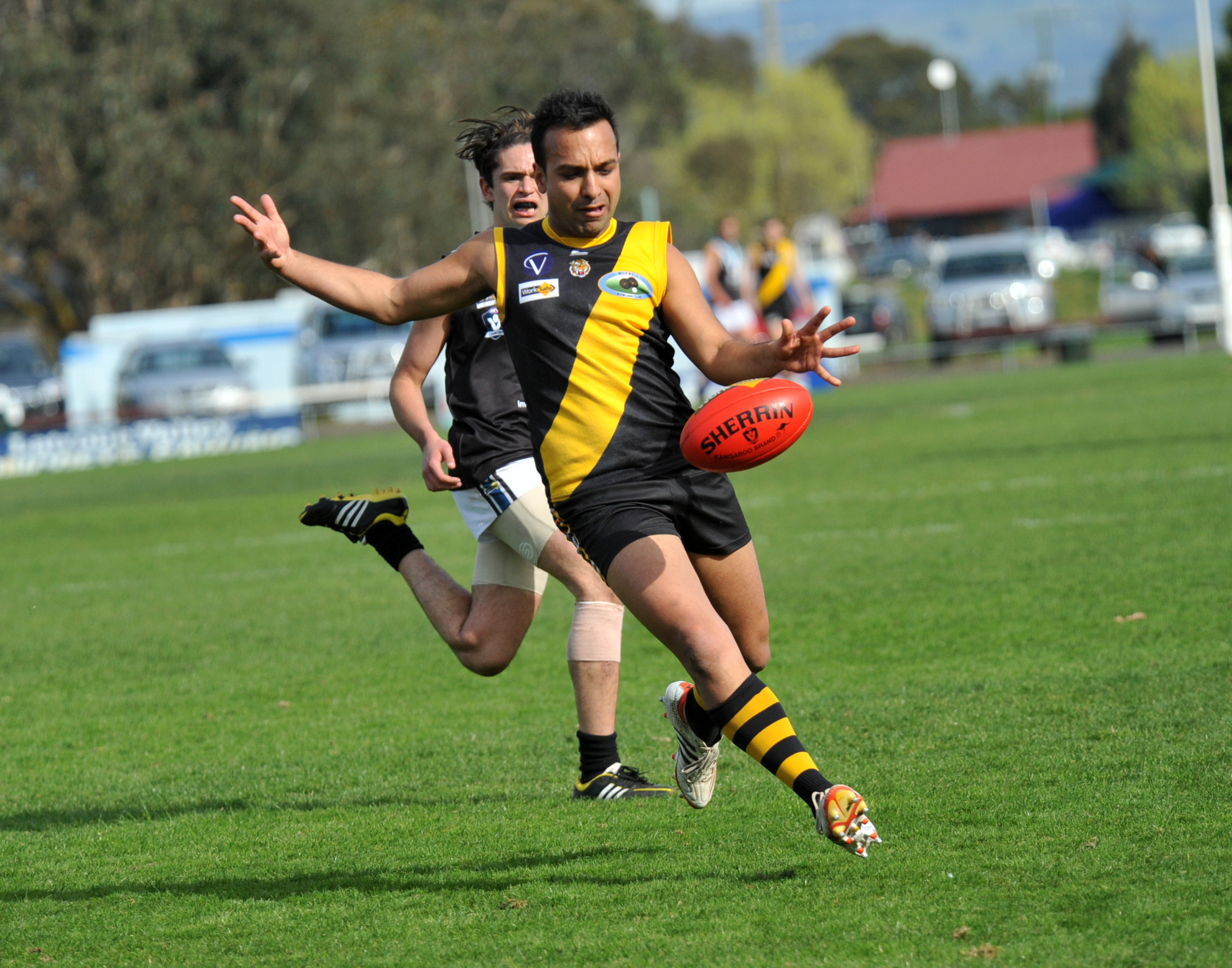 LAST year’s top and bottom sides will have all eyes on them come round one of the Gippsland League next weekend.

Reigning premier Morwell and wooden spooner Moe, who will contest the competition’s first ever Good Friday game this year, will play the parts of hunted and hunter respectively and both have plenty to prove.

Now the dust, ash and particulate matter have settled in Morwell, the Tigers will unfurl their first premiership flag in 17 years at home against Wonthaggi missing a quartet of players that helped them win it. Jeff Ryan, Lachlan Dowling, Jack Brown and Nathan Scurrah have departed, but the Tigers have recruited well with the likes of Thys Stanistreet (Yinnar), Lachlan Little (Glengarry) and Simon Noy (Hill End) switching leagues.

“We had a lot of success last year bringing two premiership players from Yallourn North and they just fitted in perfectly, so hopefully Simon Noy (and the other signings) can do that because he’s got a lot of potential,” coach Harmit Singh said. The club has also picked up 200 centimetre Ivanhoe forward Ash Close, who kicked 117 goals in the VAFA in 2012, and retained former Richmond-listed Dean MacDonald in a potent attacking department.

Ex-Gippsland Power player Ben Kearns will hedge his time between Morwell and Collingwood in the VFL, and Bendigo League medal winner Wayne Schultz is on board for 2014.

Former Collingwood star Tarkyn Lockyer looks set for an encore appearance in a Tigers side that will stick to the formula that garnered the drought-ending title.

“We’ll keep things similar and just try to do things better than we did last year because there’s still a lot of areas to our game that need to improve,” Singh said.

Singh has no concerns about having a target on his side’s back, following its decimation of “benchmark” Sale in last year’s grand final by 81 points.

“We did some things that teams might try to restrict or roll in to their own game but the game evolves really quickly, so it’s the sides that can evolve and understand where the game’s heading, even at local footy, that will be in pretty good shape,” he said.

At the other end of the spectrum is last year’s wooden spooner Moe.

Under the leadership of new coach and Maffra champion Adrian Burgiel the Lions have rebuilt with several new and returning players.

Trafalgar trio Michael Farrell, Matt Swenson and Chris Kyriacou, along with Noble Park signings Lloyd and Nick Williams have bolstered the side which plans to make an assault on the top five.

With new number one ticket holder Kevin Sheedy to play a part in Moe’s revival, the Lions are out to impress in 2014.

“We’ve just got to get some confidence in the side that we can actually push some sides and win more games of footy,” Burgiel said.

“We’re going back to the basics; we want to be very disciplined when we play our footy and that starts with our one per centers – tackling… we want to make sure we’re hard and tough at the footy, and get our hands on the ball and win clearances.

“It’s nothing out of the ordinary… but a few other little things I’m trying to bring in will hopefully bring some results.”

Still recovering from surgery Burgiel is unlikely to take the field against his former club for the round one blockbuster under new lights at Maffra and will target a round three return.

The departure of Burgiel’s brother and 2013 coach Hayden from Maffra has seen former premiership coach Wayne Butcher return to the top job at the depleted Eagles.

Despite some key losses, the Eagles will be favoured to make finals along with East Gippsland rival Sale. Last year’s runner-up is largely unchanged and under Matt Ferguson will again come into premiership calculations.

With eight players on the Gippsland Power list Traralgon is brimming with up and coming talent. Paul McCulloch will return for another season as coach and Michael Geary has inherited the Maroons’ captaincy from Jaime Aitkin.

Former Maroon and current Richmond development coach Andrew McQualter of St Kilda fame is rumoured to feature in round three as a marquee player.

Bairnsdale has picked up a platoon of new recruits and could be this year’s dark horse under Shaun Mooney.

Wonthaggi Power took it to the top four sides last year, beating all but Sale throughout the year, and with a reinforced list could again be a finals threat. Leongatha has lost the services of ex-Richmond backman Will Thursfield, and will sorely miss the likes of Pat Contin and Cade Maskell in its bid to return to the top half of the ladder.

Warragul has suffered something of an exodus and looks a little thin on paper, however the inclusion of former Mornington Peninsula Napean best and fairest winner Brad Scalzo from Noble Park in the Eastern Football League comes as a huge boost.

Scalzo is a former Dandenong Stingray and spent two years at Casey Scorpions.

Drouin is another side desperate for improvement after a lacklustre 2013, and has signed an exotic centre-half forward from the Tiwi Islands in Alastair Darcy.

The Gippsland League will return to a Saturday grand final this year, and features two Anzac Day matches – Leongatha versus Maffra and Warragul versus Bairnsdale.

Morwell will host a VFL clash between Richmond and Collingwood on 28 June, and the interleague side under premiership coach Singh will be out to usurp Bendigo in May and move to seventh on the country rankings.

The season kicks off next weekend.