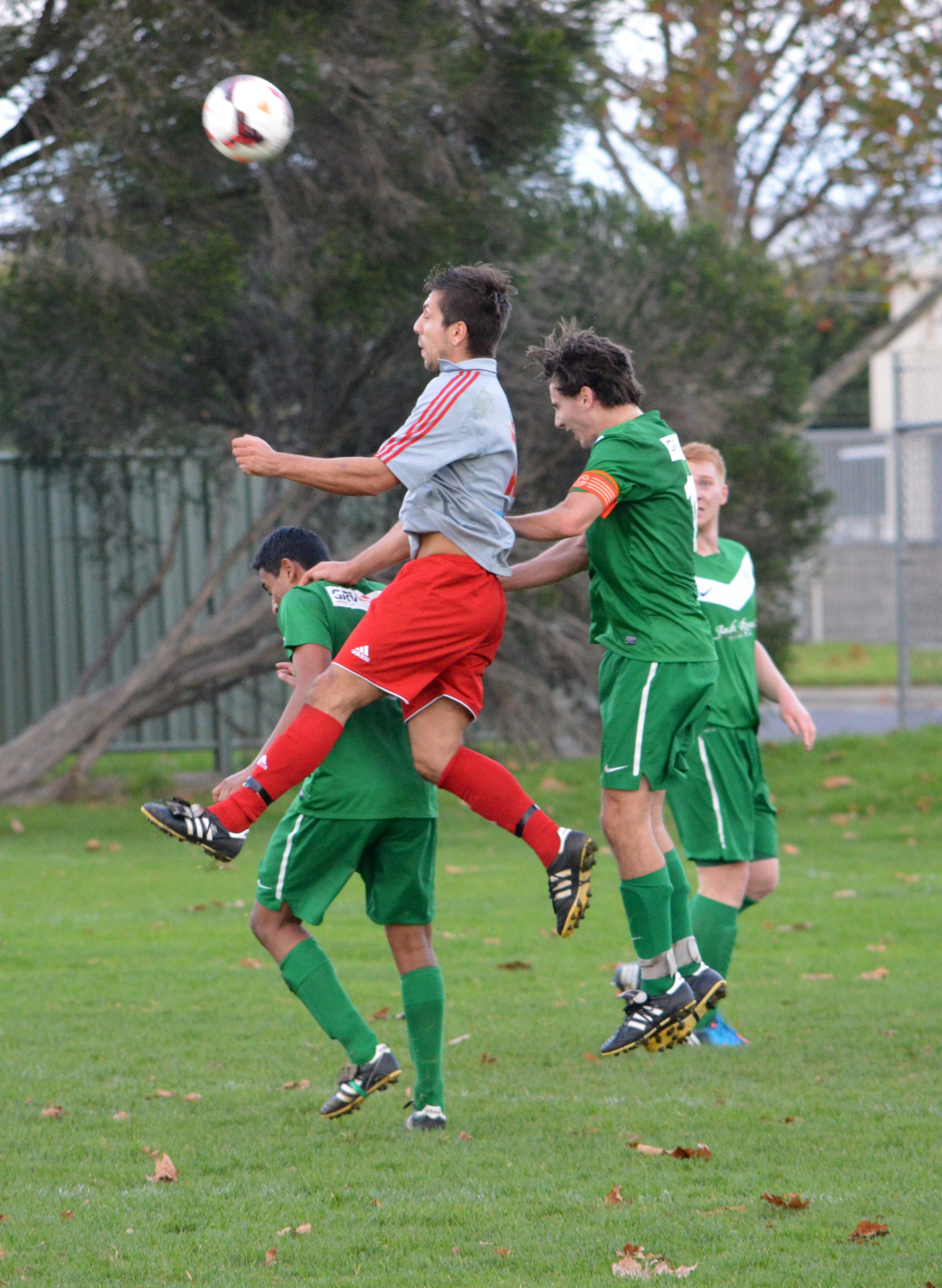 Churchill travelled to second-placed Sale looking to put a gap on the field in the Gippsland Soccer League Championship race.

In a fast paced start, Sale United pressed early, however it was the Rams who made the first breakthrough.

A Mark Bianconi-free kick was flicked on by the towering Paul Riess for Taylor Jackson to finish with a left foot volley at the far post.

The lead was short lived however, as prolific young Swans weapon Tommy Nguyen hit a long range shot through the Rams’ defence, off the post and into the back of the net.

The second half started with Churchill in control and its dominance was rewarded when Matthew Maselli stepped up and hit a trademark free kick into the top corner.

The rest of the half saw some fantastic defending from a determined Rams’ defence, keeping out multiple Sale attacks while remaining dangerous on the counter attack to win 2-1.

The Rams host Traralgon City on Sunday at “The Paddock”.

The clash between Fortuna 60 and Monash during Pink Ribbon Week was a close encounter all day and ultimately there was nothing to separate the two teams.

Monash came out strong from the beginning and created some half chances that it could not capitalise on.

This spurred Fortuna into action with Hayden Tanti making some dangerous runs down the wing, but the end product was not there for the home side.

The best opportunity in the first half fell to Fortuna’s new recruit Cameron Dunne, which he met at the penalty spot but his shot was desperately blocked.

Monash had a penalty waved away when a Chad Shelley-shot was parried away by Fortuna custodian Jason Collins, before Ethan Lawrence was brought down by the keeper.

Both teams looked for the winner in the second half and it was Fortuna to draw first blood on 53 minutes when a teasing low cross from Dunne was pounced upon by Tanti, who beat the keeper to the ball and tucked a neat finish into the back of the net.

This sparked Monash into action and the introduction of Andres Nilo paid dividends when he latched on to a Tom Bramstedt-free kick to head home and level the scores 1-1.

With both teams pushing for the finishing blow, some heavy challenges were on display and Monash coach Wally Noppert was forced into two substitutions, including himself, as he and Lawrence both succumbed to concussion.

There was a late flurry of chances for both teams but neither could find the net and the game eventually finished 1-1.

After returning to winning ways in the last week, Falcons 2000 travelled to Newborough looking to build on its recent run and cement its place in the top six.

Falcons came firing out of the blocks but could not fashion a clear cut chance until a scorching 25-yard drive from Nick D’Alessandro midway through the first half gave the visitors the lead.

The birds continued to press but often found it difficult to dissect a resolute Newborough defence which showed great intensity from the outset.

Only minutes after the interval Falcons made it two with an opportunistic goal by an in-form Manny Tombra, which saw him evade several challenges before poking home from close range.

Falcons looked comfortable and should have buried the result with gilt-edged chances falling to both Jesse Kennedy and Scott Mackeown, yet neither could take advantage.

With 25 minutes to go, the Combine fashioned their first shot on target which resulted in a goal to peg back the lead and give renewed hope in earning a result.

Try as they might, Newborough could not create any further chances and Falcons held on to a 2-1 victory.

The result put Falcons in outright fourth on the league table ahead of its derby clash with Fortuna on Saturday night.

The league champion found it tough going at Ronald Reserve against a resilient Morwell Pegasus, but showed class to emerge with a 2-0 win.

Moe’s Ash Birrell suffered an ankle injury moments into the match and was replaced by Sam Gatpan after three minutes.

Pegasus kept a clean sheet through the first half, despite a raft of chances falling to the Red Devils.

Moe rectified its goalless start after the break, netting early in the second period to surge ahead.

Marc Mchallam controlled the game for the Red Devils, and his endeavour was rewarded with a goal.

Gatpan was the other scorer for Moe on the day.

The news was worse still for Pegasus; defensive lynchpin Shaun Bye limped off with a hamstring injury on 70 minutes.

The result lifted Moe above Sale into second place on the ladder.

A double from Simon Ieradi helped Traralgon Olympians stave off Tyers Lightning away from home.

Olympians established a 1-0 lead by the break, and scored twice in the second half to run out 3-1 winners.

Cameron McCallum scored a consolation goal for the home side, while Henri Scott netted Olympians’ other.

It was the first win for the Traralgon side this season, elevating it above Newborough Yallourn United on goal difference into ninth on the ladder.

Traralgon City had the bye.