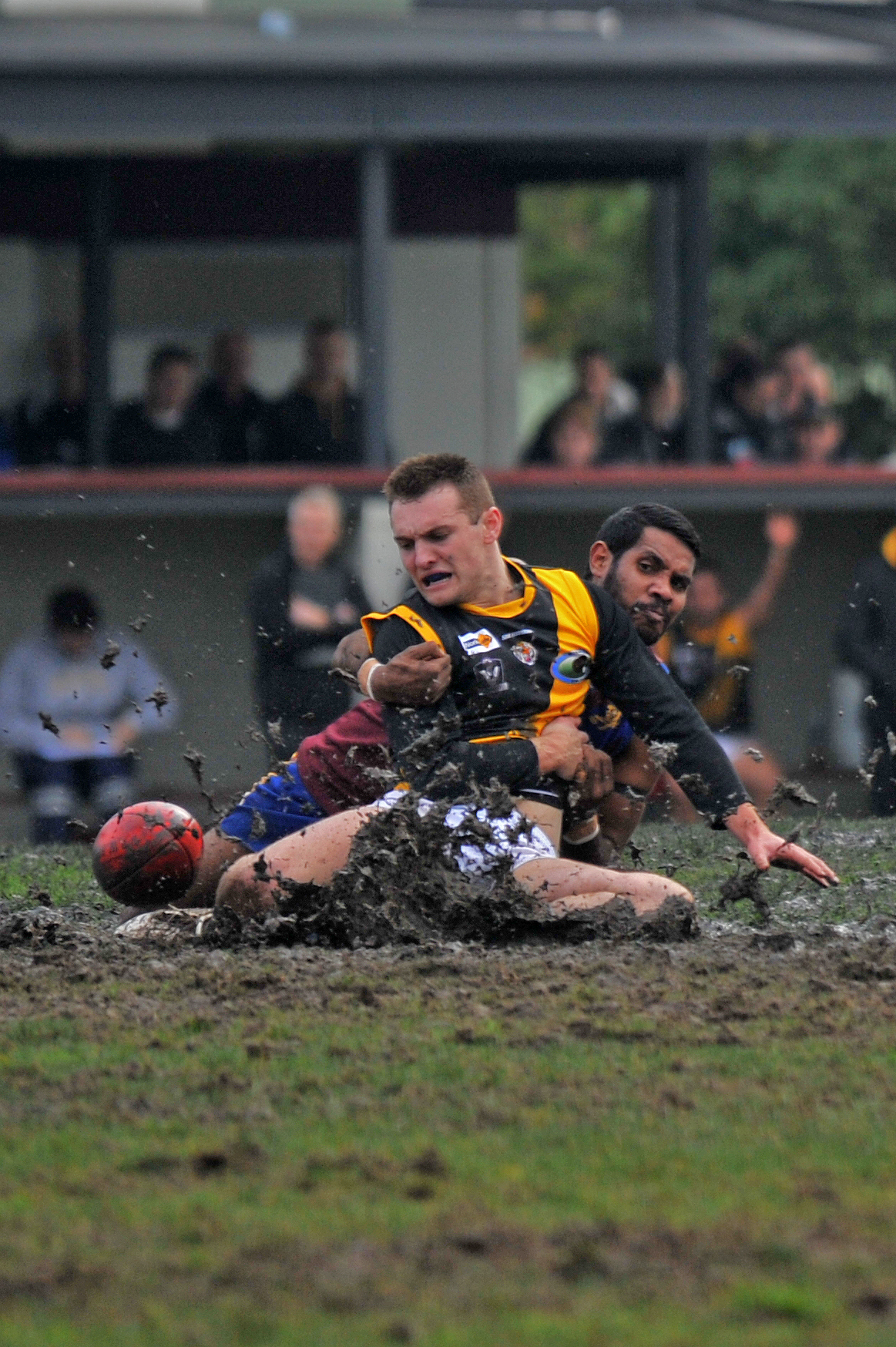 Moe fell just short of causing one of Gippsland League biggest upsets of the year, going down to the reigning premier Morwell by 22 points in a low scoring encounter yesterday.

“I was really proud of the boys. They played really well,” Lions coach Adrian Burgiel said.

“They’ve improved greatly and the ladder truly doesn’t reflect where they are at,” Singh said.

“They are a team that will take some scalps by the end of season 2014.”

There was not much grass left on the Moe surface following the fourth and final game of the day.

“We have had three home games in a row during a wet patch, the ground just hasn’t come back,” Burgiel said.

Yesterday’s clash was a tight one played in tough conditions.

“We played well, our pressure was good, the boys really had a crack.”

The visitor led the Lions by a kick at quarter-time and by half-time the margin was back to two points.

“Then we just dropped our pressure off a bit. At three-quarter-time I thought we were still a chance, but we reverted to some old habits,” Burgiel said.

“We overused the ball and didn’t play well enough to the conditions.”

As good sides do, the reigning premier capitalised.

The Tigers kicked away to an 11-point lead in the third, before outscoring the home team in a low scoring final term to run out a reasonably comfortable winner.

“It was great to get a win in difficult conditions,” Singh said.

“A lot of our guys probably weren’t at their best, however to work through it was pleasing.”

“Unfortunately we were pretty inaccurate today and that is something we will have to work on going into next week,” Singh said.

“Julian Blackford was outstanding and provided excellent aerial support to his teammates, while Joel Soutar led from the front.

It was a day for the captains, with Moe’s also among the best players on the ground.

“Ben Morrow our captain played really well all day, while Jason Wood kicked three goals before moving into the midfield. I thought our whole midfield group was outstanding,” Burgiel said.

Sale claimed the narrowest of victories over Wonthaggi Power, in a low scoring encounter between two of the competition’s top five teams.

The Power got the early break and led the goalless ladder leader by 21 points at the first change.

Sale outscored the home team in the second to get within 14 points at half-time but was once again out-played in the third.

Leading by 35 points at the last change, the Power looked poised for an upset victory.

However, last year’s runner-up proved it was once again a force to reckoned with, booting four unanswered goals in the last to nab the win by four points.

Maffra cemented fifth spot with a 23-point win over Leongatha.

Leongatha had the upper hand early however there was just three points in it at both half and three-quarter-time.

It was all the home team in the last as the Eagles added three goals to the Parrots’ none to run out a comfortable winner.

Brad Caldwell booted three and Daniel Bedggood two in a best on ground performance for Maffra.

Nicholas Nagel was Leongatha’s only multiple goal scorer, with four.

Traralgon made it two-in-a-row and it did so in style, with a percentage boosting 206-point win over Drouin.

Still reeling from last week’s draw with Wonthaggi, the Maroons came out firing, slamming on nine unanswered goals in the opening term to lead Drouin by 60 points at the first change.

It was one-way traffic for the remainder of the day, with the Hawks unable to match it with their Latrobe Valley opponent who stormed to a much-needed victory.

Among Traralgon’s 12 goal kickers, Lee Stockdale booted a bag of nine majors, however the haul did not earn him best on ground, with Tim Northe taking the honours.

It was a similar story in the east where Bairnsdale booted a massive 34 goals to beat Warragul by 202 points.

James Gibbs and Sam Pickett kicked eight each as the Redlegs stormed to victory.

Brad Scalzo was the standout during what was a tough day out for the visitor.