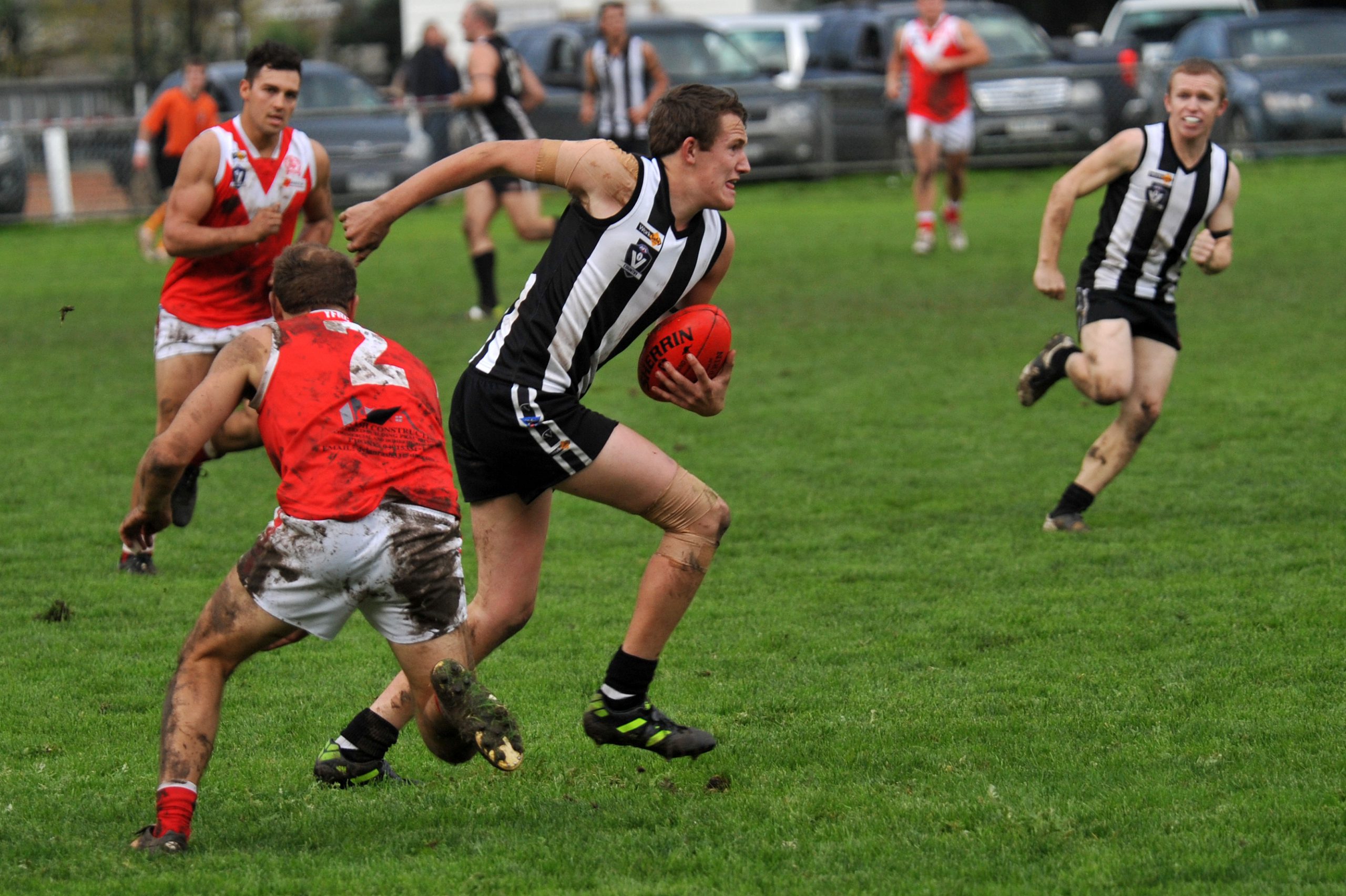 With its season on the line, and wins a must, Cowwarr sealed one of its best victories for the North Gippsland football 2014 season against highly fancied opponent Yarram.

Dark clouds overhead threatened the match of the round, with patches of showers and sunshine just as unpredictable as the battle that raged across the afternoon.

Dominating play early, it was the Demons that held the upper hand registering the opening major through Shem Rendell.

Cowwarr’s defence felt the raft of the visitor’s forward structure, which was well served by Corbin Sutherland throughout the contest.

It did not take long for the home side to settle and open up their account, the first of four unanswered majors from Kyle Stamers and Ben Plozza.

Led by their running brigade of Luke Cooper, Robbie Ferguson and Cory Bannister, the execution into the Saints forward line was sublime.

Shane Morgan and Pat Tainsh worked hard to bring the ball to ground.

The second term was an even affair on the scoreboard, the sides exchanging blow for blow as they levelled the ledger.

Trailing by 25 points at the long change the significance of the premiership term was not lost on the visitors, with Yarram told to “stand up”.

And stand-up is exactly what it did.

Scoring didn’t come easy throughout the contest; however the third term was a blistering affair.

Precision kicking and execution by Tom Holt saw Sutherland boot his first for the term following a strong chest mark in front of back man Brett Grieves.

It would be followed by another to Sutherland, the Demons’ third unanswered major.

Jari McDonald’s second for the day levelled scores, as the visitors exposed the Saints napping before Plozza pushed forward to score his side’s sole major for the term.

In a barnstorming performance Sutherland starred, booting four for the quarter which saw the Demons turn a 25-point deficit into a 20-point lead at the final change.

With its finals ambitions fading Cowwarr challenged in the final term to outscore Yarram, arresting the lead.

Stamers kicked things off, before Plozza added another to his match tally of four.

Drawing within a point, McDonald’s second major had the Yarram faithful on their feet before Shane Morgan responded for the Saints.

Held relatively quiet Brett Street got a sniff and drilled the ball into goal from the boundary before Stamers registered his sixth for the contest from the resulting centre bounce, sealing his side’s victory, 16.8 (104) to14.8 (92).

Stamers was judged best a field for the Saints, his run and execution in front of goal a standout.

Tainsh was a dogged workhorse throughout the contest and kept Yarram’s playmakers in check, while Shane Galea provided a target across centre half forward.

For the visitors defender Anderson was staunch down back, Vardy was key in the ruck when pushing forward and saved a number of majors on the last line of defence while Sutherland was key to lifting his side in the third term.

Despite an inaccurate third term, which saw Rosedale squander a number of scoring opportunities, the Blues were rarely troubled by reigning premiers Glengarry after quarter time.

Eight points separated the sides at the first change and that would be as close as the Magpies would get to the third-placed Blues, who booted a further 15 majors for the contest to run home comfortable 103-point victors.

Dale Fleming and Brandon McDonald were the pick of the goal scorers booting four a piece, with Flemings performance seeing him collect the three votes.

An 18-goal-to-four second half by Churchill resulted in the second-place Cougars confirming their hold on a top three finish, with the side boosting their percentage by nine points.

The 21-goal victory was the Cougars’ sixth straight win, with the side showing no slowing from their barnstorming disposal of opposition sides.

A mere 11 points separated the sides at the first change, with the Wildcats defence suffering a blow when coach Chris Pettit left the field through injury.

The Wildcats through Hank Norman and Shane Kilgower worked hard to stay in the contest, but found themselves little match against a side who boasted 12 individual goal scorers, six of which booted two majors or more.

Churchill’s Hamish Towns was the leading goal scorer for the weekend with eight, while father-son duo of Brendan and Kurt Holt added seven between them.

Following two straight defeats fourth-placed Sale City made a welcome return to the winners list with a 105-point victory over Boisdale-Briagolong.

Leading by 24 points at the first change, City exploded out of the blocks in the opening minutes of the second term.

The Dogs piled on seven majors to four in a high scoring quarter, which saw Brendon Rathnow run rings around the opposition.

Amassing possessions, Rathnow was a standout for the Dogs along with Byron Shingles and Brad McKay in the engine room.

Holding sway the Dogs buried the opposition in the third term adding a further seven majors, with the Bombers struggling to halt the damage on the scoreboard.

Abe Schuback and Jake Schuback found themselves among the home side’s second half attack on the scoreboard, the pair booting three apiece.

Boisdale-Briagolong’s Alec Munro was the sole multiple goal scorer with two majors and was named best on ground.

Led by midfielder Jack Woodland in a best-on-ground performance, the competition’s number one ranked side boasted too many avenues to goal and a running brigade that troubled the lesser ranked Bombers.

For the Bombers Guy Sinclair flew the flag along with ruckman Luke Middleton and midfielder Pat Sharp.