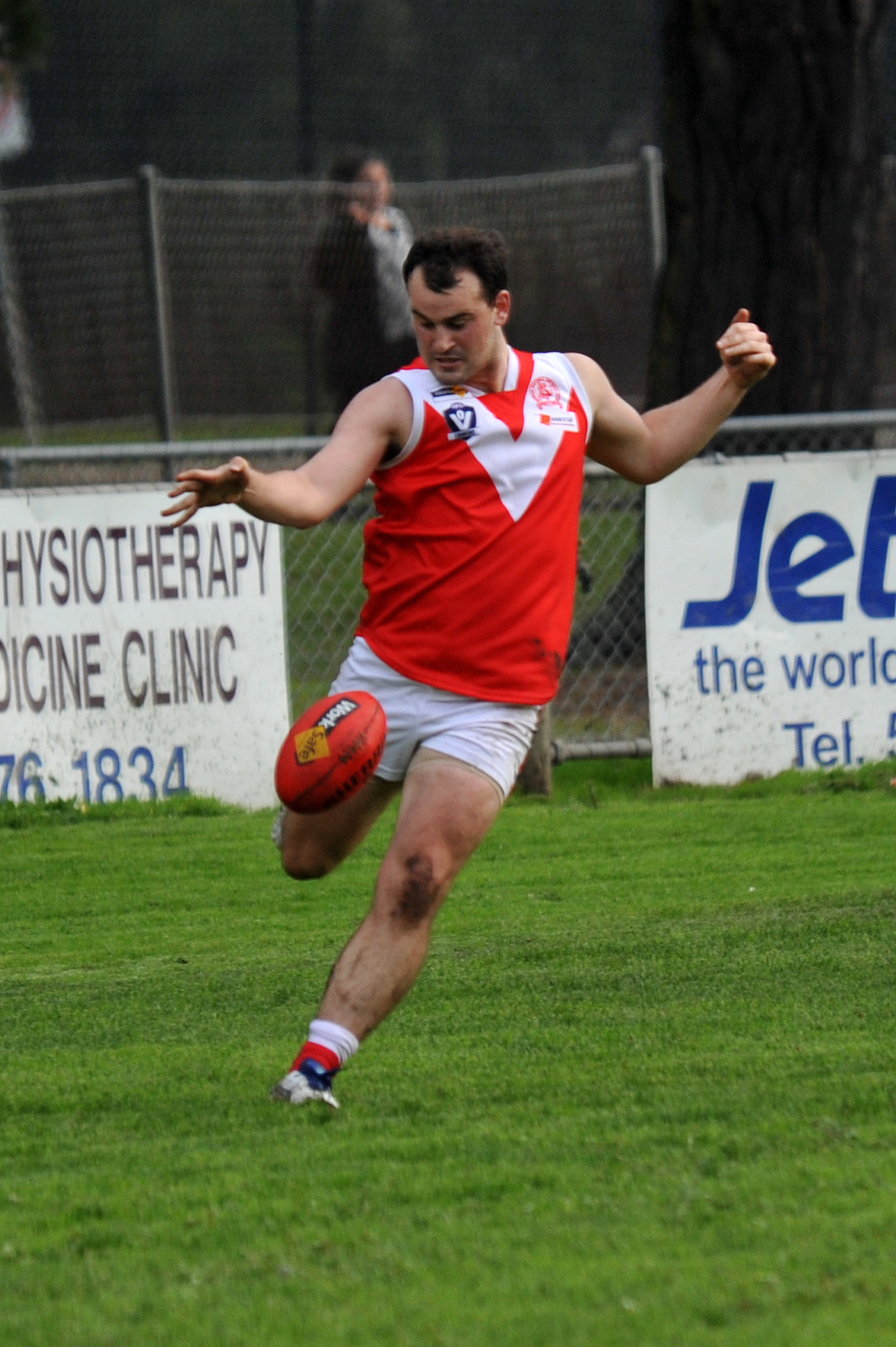 WOODSIDE coach Chris Pettitt may have felt a sense of deja vu on Saturday when the final siren rang in the Wildcats’ contest against Traralgon Tyers United.

As was the case in the corresponding match last season, the Wildcats fell agonisingly short of the line and, in doing so, watched their end of season ambitions slip away.

Fast forward 12 months and it was again the Bombers who may have ended Woodside’s top five hopes.

Last week the Bombers dashed Cowwarr’s dreams, this week’s Woodside’s, earning some respect from season 2014, the one that went south.

For Woodside, the loss was a missed opportunity.

With clashes still to come against Rosedale, Cowwarr and Heyfield, they may well have done their dash and for the second season in a row left to rue the ones that got away.

The match was enticing from the opening bounce, with Guy Sinclair pitted against key forward and danger man Justin Staley, who was kept relatively in check adding two to his season ledger of 65.

Little separated the sides throughout the afternoon; the margin was five points in Woodside’s favour at the first change before the Bombers booted three goals to one to turn the tables ahead of half-time and led by eight points with Tyler Mustoe a standout figure in front of goal.

The goals were hard to come by in the premiership term and only three were scored in total, with the home side claiming the honours on the scoreboard in a hard and physical 25 minutes of play.

The Wildcats rallied in the final term, heeding coach Pettitt’s instructions, and with their season on the line rallied but fell short at the final siren 9.14 (68) to 7.11 (59).

Struggling to make the most of their opportunities in front of goal, the Saints now find themselves locked on 28 points with Woodside and one game outside the five.

The match was evenly placed at the first change and both sides’ desperation at the ball was evident as the Blues took a 10-point lead at the break.

The Saints regrouped after a sluggish start and worked hard to match the home side before the main change.

Booting 5.5 (35) in the third term, the Blues extended their lead and scoreboard pressure paid dividends as the Saints’ defence was at times stretched and struggling.

Maintaining composure at the final change, the Blues hit the ground running to slam home a further six goals to one to make a return to the winners’ list with a comprehensive 69-point victory.

Brandon McDonald finished the match with four majors to take his season tally to 36, Rohan Diamond chipped in with three, with Brad Scott and Chris King scoring two apiece.

For the Saints best on ground Shane Morgan found the form that eluded him in last week’s milestone match, Pat Tainsh worked hard to set up opportunities for his side and Steve Cooper was tireless in his efforts to provide his side with first use of the ball.

A BLISTERING 11 goal to one opening term killed the contest between second placed Churchill and bottom of the table Boisdale/Briagolong.

It was always going to be a tough assignment for the baby Bombers who were simply railroaded by a side which has sights firmly set on the end of season prize.

Proving no match for the juggernaut that is Churchill, the Bombers could only watch in awe as the competition’s in form side took all before it to run home 30-goal victors.

This week it was Hamish Towns’ turn to top the goal kicking tally; he was one of 11 individual scorers and his match high tally of seven provided plenty for the highlights reel.

Nic Campbell and Joe Whykes found plenty of it booting five a piece, with best on ground Travis Brighton added four in a superb individual effort.

ON Sunday Gormandale pulled out all the party tricks to spoil Glengarry’s premiership reunion celebrations.

Trailing at the first change, the Tigers dug deep in the second term to slam home six majors to two to set about building a formidable lead.

However, the Magpies had other ideas.

Led by forward Mark Engley, the Magpies rallied in the third term to outscore the visitors.

Engley added three of his match tally of six in a high scoring 25 minutes of play.

Down by nine points at the final change, the Magpies worked hard to make the most of their chances early, however a goal disallowed following a free kick to Gormandale swung the pendulum the way of the Tigers.

With their tails up and forward Richards on song, there was no halting the 10th placed side.

Adding five goals to four the Tigers recorded their fourth win of the season by 16 points, knocking off the premier for the second time this season.

It was the experienced campaigners that led from the front for Gormandale.

Richards worked well with the engine room duo of Daniel Domaille and Luke Hegarty, while Daniel Trease provided a spark up forward with four majors.

For the home side Dean Pearce was a standout, Josh King was an early casualty to injury, while coach Ryan Potter hobbled from the ground in the dying stages of the contest.

Sale City was held goalless in the opening term and was relegated to playing catch up football against a side that has again laid stake to the highly sought after final place in the top five.

With its season on the line, Yarram blitzed City to dish the dogs their second defeat in as many weeks, doubling their score for the afternoon.

Squaring the ledger at one all, the two sides may play off in the knockout elimination bout if Yarram can firm their grasp on fifth place.

It was an impressive performance by the Demons, who laid the foundations for their 16.10 (106) to 7.9 (51) victory with an eight goal to four opening half.

The side did not falter after the long change, rather they continued to steamroll the opposition, adding a further eight majors to coast to victory.

Corbin Sutherland led the charge in the forward 50, booting four majors as one of 12 individual goal scorers.

Dogged Ryan Coulthard impressed and played a main hand in holding the Dogs’ forwards at bay, coach Griffin Underwood directed traffic in the engine room keeping the Dogs front runners in control while Dan Vardy was formidable in the ruck.

For City, Jake Milham was a standout and collected the three votes while Jake Schuback booted two majors.