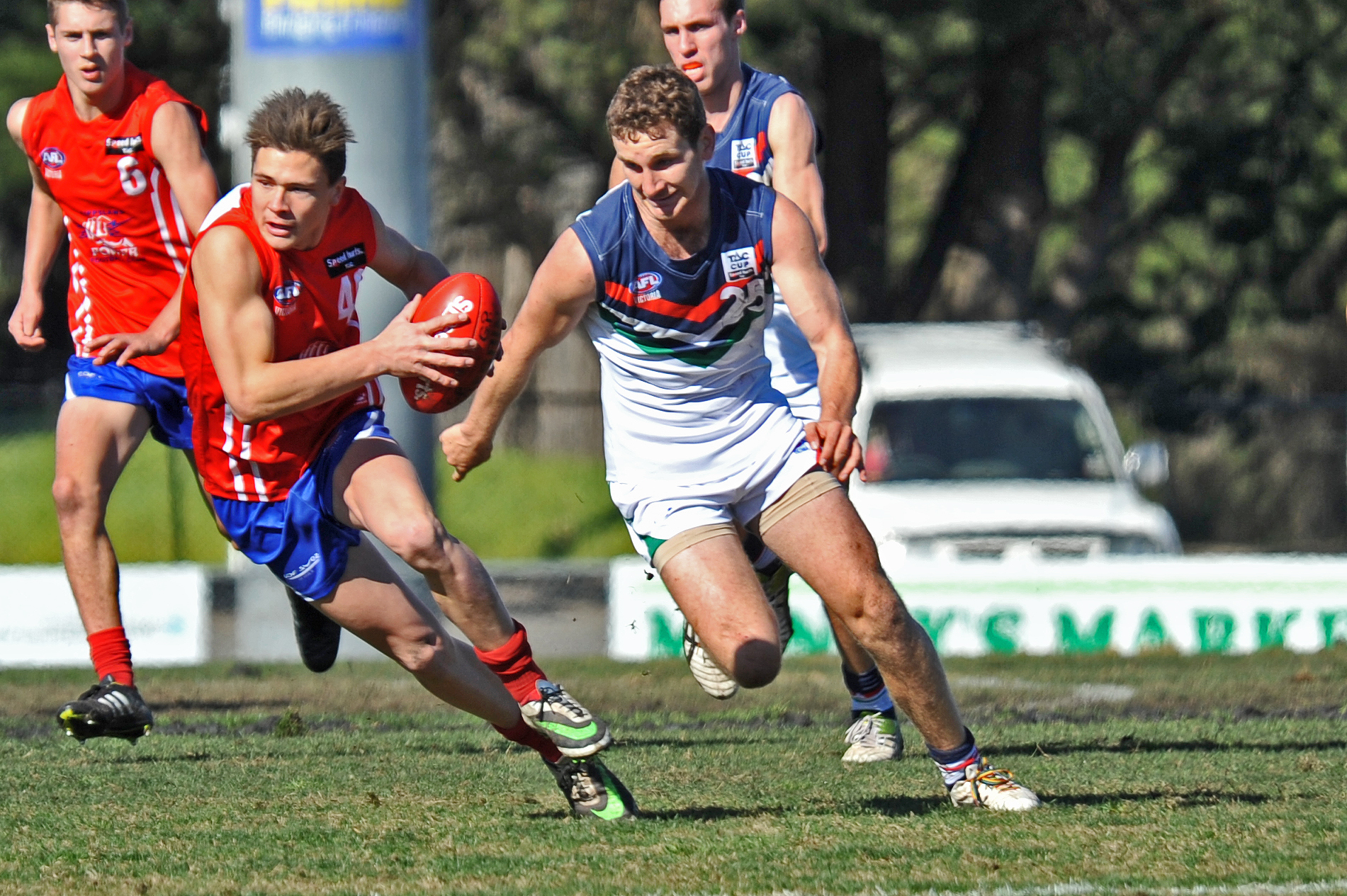 THE combined might of New South Wales and the Australian Capital Territory was not enough to subdue Loy Yang B Gippsland Power at Morwell Recreation Reserve on Sunday.

The Rams presented a genuine challenge to the Power, bringing basically the same side that dominated the second division of the national under-18 championships.

Gippsland, however, capitalised on its momentum and recent confirmation of several highly rated 2014 AFL Draft prospects to put together a solid 23 point victory.

The Power had its best squad available with the injury list almost non-existent.

Moe youngster Darnell Grech returned after being dogged by injury and key team leader Liam Nash was ready for his third consecutive game after missing most of the season due to serious hip injuries.

Conditions at Morwell were excellent considering the amount of rain that had fallen in the previous 48 hours and the Rams were on the front foot early, using their strength and pace to win contests and pressure the Power defenders.

They scored the first goal while the Power, in contrast, was struggling to get the ball into the forward line.

The Power defence, led magnificently by Nash, withstood the onslaught for much of the term before a long and direct forward thrust allowed Grech to win the ball and kick a long goal from about the 50 metre line.

The Rams hit back quickly with an easy goal before Declan Keilty found Nash Holmes for a timely reply.

Strong contested marks by Sam Skinner and then Keilty allowed the latter to kick an important goal and by the first change the Power had a well-deserved five point lead.

However, it was short lived as the Rams booted two after the change.

Pace and skill by Tom Papley created a chance for Josh Dunkley to stem the torrent of Rams goals but the visitor quickly regained the momentum with a six-pointer on the rebound.

On-baller Holmes used a free kick to create an opportunity for Papley to rove the pack and score one for himself.

The Rams hit back from a free kick at the resultant centre bounce and the Power replied with some outstanding forward pressure by Ben Ainsworth and Keilty, which allowed Todd Beck to snap an easy goal.

Rallying late in the term, Papley snapped a second to put his side five points up at the long change.

Following the trend of the match, the Rams kicked the first goal of the term.

It took some outstanding play by Power strongman Holmes to set Papley up for another fine goal.

For much of the rest of the term it was an arm wrestle as the Power stemmed the Rams’ scoring, but wasted three chances of its own with sloppy finishing.

By the end of the quarter the scores were level, and the Power’s wastefulness continued in the opening minutes of the last term, squandering four golden opportunities to goal.

It took another timely snap by Dunkley to break the dangerous pattern.

Some strong and courageous play by Jack Hammond earned a free kick and, with some extra help via a 50 metre penalty, he slotted home.

Some wonderful contested marks and long kicks by Holmes and Skinner allowed Keilty to join the party and score another.

A well delivered long and direct forward thrust by Dunkley gave Keilty a chance to display his ground skills which he converted to six points.

Almost against the run of play the Rams finally broke down some outstanding Power defence to score a goal but Josh Patullo won a late free kick to restore the side’s 23 point advantage at the final siren.

The Power now goes into the last bye of the 2014 TAC Cup season before facing the Dragons and Jets in the final two regular games of the season.