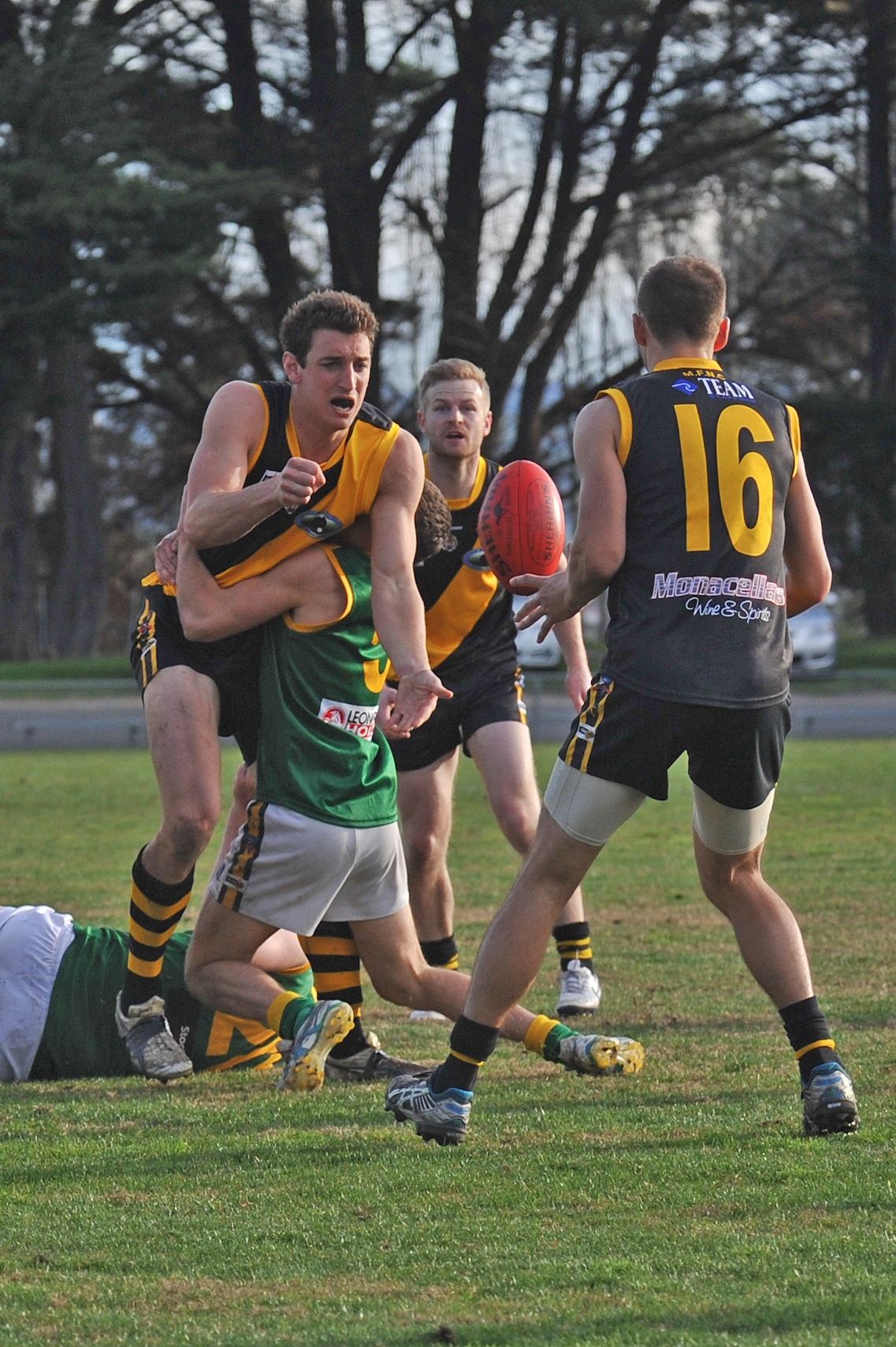 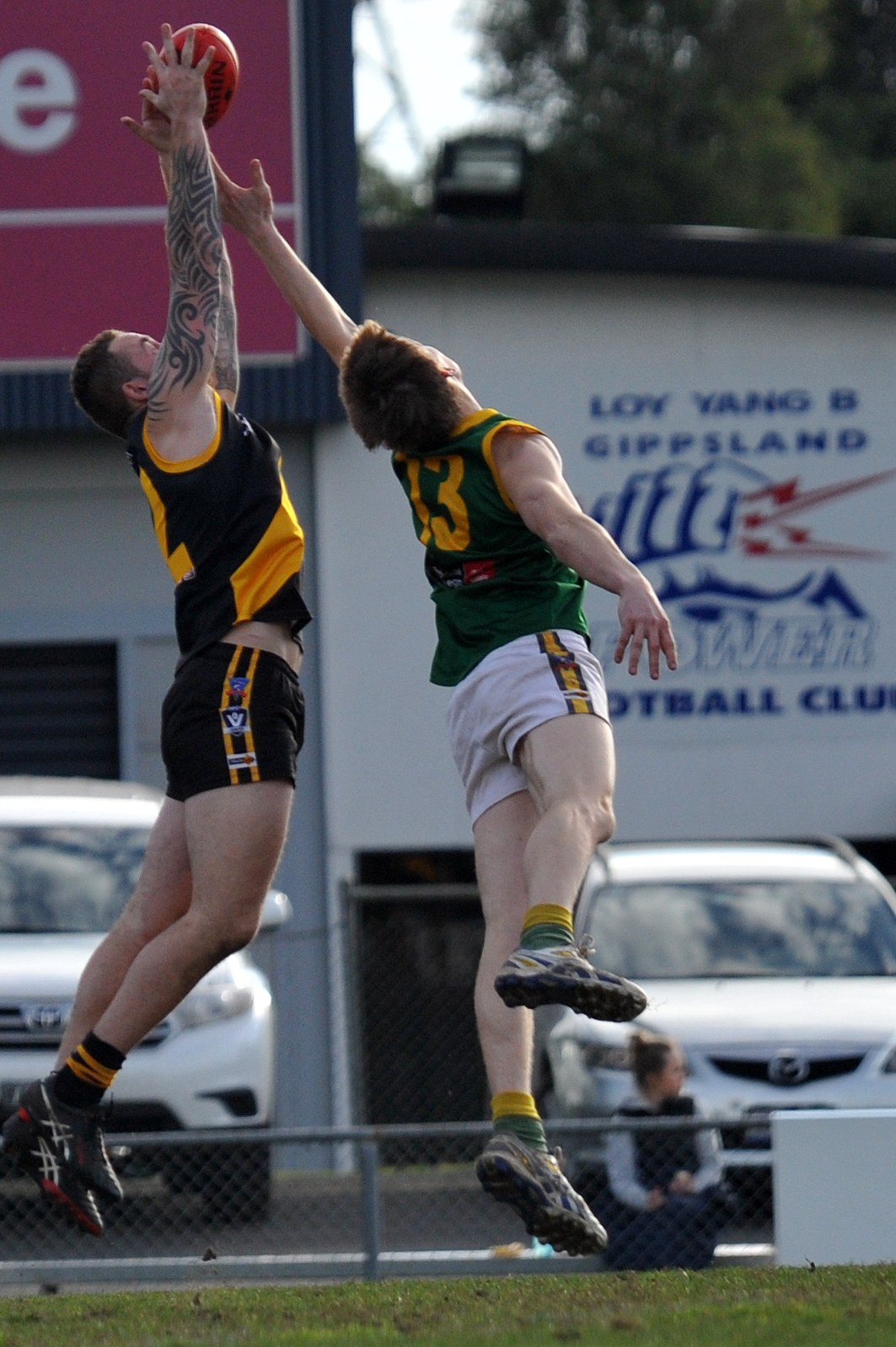 LEONGATHA let slip what would have been its biggest win of the Gippsland League season at Morwell Recreation Reserve on Saturday.

After a tight first half, Leongatha put itself in sight of a major upset with a five-goal-to-two third term.

However, missed opportunities either side of three-quarter-time left the door ajar and the home side did not need a second invitation.

Dean Macdonald got off the leash, with three of his five goals coming in the final term, while livewire small forwards Ben Kearns and Mannon Johnston booted two apiece to spearhead the comeback.

Tigers coach Harmit Singh admitted it was quite a scare.

“We were under no illusions about the task at hand and the scoreboard didn’t do Leongatha justice,” Singh said.

“We were down by 22 points at one stage and we haven’t been in that position a lot.

“We weren’t able to win the contested footy in the first three quarters and weren’t at our best, but it was great to finish with a nine-goal last quarter.

“They went with an extra man behind the footy, but we took a few more risks in the last quarter and got a better spread across the ground and created some more one-on-ones inside 50.”

Tom Crosby was excellent in the ruck, back pocket Zach Anderson kept the dangerous Marc Truscio in check and Michael J Duncan was sharp in his return from injury.

“If you let good sides like Morwell off the hook they kick your bum,” Garner said.

“We haven’t been far off the good sides all year, but we’re always one quarter away.

“We were down to one rotation in the last quarter and got smashed in the centre clearances.

“You couldn’t argue with our effort, but the way Morwell work with the footy shows us where we need to improve.”

Zak Vernon and Tom Marriott were outstanding at the coalface for Leongatha and Nick Nagel saw off two opponents and booted four goals to lead the visiting attack in the long-term absence of Aaron Hillberg and Brent Lynch.

WONTHAGGI moved a step closer to securing third spot and a crucial finals double chance with a convincing 49-point win against Bairnsdale.

The Power set up the win with a blistering first half, piling on five goals to one behind in the opening term and four goals to two in the second to lead by 43 points at the main change.

The Redlegs broke even after half-time, but never looked like overturning the deficit, as the visitors celebrated a successful road trip with a 15.6 (96) to 7.5 (47) victory.

Byron Dryden, Aiden Lindsay and Aaron Ware were best for the Power, while Bryce Mitchell, Stephen Henshaw (two goals) and Bayden Ashwood battled hard for the home side.

Josh Jennings continued his stellar back half of the season with three goals in a best-on-ground performance.

Tim Northe, Danny Campbell and Michael Geary were also prominent for the Maroons, who moved back within two points of fifth-placed Bairnsdale.

The Gulls were lucky to avoid a bigger defeat against wasteful opposition, but managed a goal every quarter, with Chris Carey, Bradley Nott and Lachlan Petch among the best.

Peter Ainsworth, Chris Robinson (four goals) and Jayden Van Dyk were the Lions’ best, while Broderick Fraser, Luke Duffy and Daniel Pratt were good for the winless Hawks, who recorded their highest score since the reverse fixture with Moe in round seven.

The ladder leading Magpies continued their march towards a final-round showdown with Morwell for the minor premiership, with an 11.18 (84) to 4.10 (34) win against the Eagles.