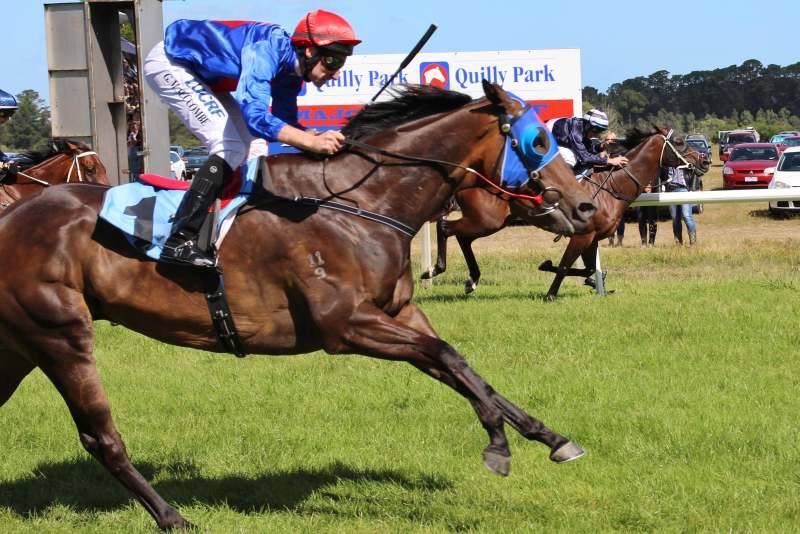 FAST improving John Kilgower galloper Avon Country made it seven wins from his nine starts for the stable at Moe Racing Club on Sunday.

Avon Country landed a plunge – TAB fixed odds bet as much as $11, ran $4 on track, and $2.70 the tote – after being given a gem of a ride by promising Sale apprentice Brandon Stockdale in the 0-58 1200 metre fourth race.

The five year-old bay gelding has been impressive on the picnic circuit in 2014-2015, with recent wins at Alexandra, Balnarring, Drouin and Healesville, where he has won thrice.

The Bramshaw and Proud Courage product is the current leader in the 2014-2015 Picnic Galloper of the Year, and now being asked to carry huge imposts due to his impressive form, the time was right to try his luck back at provincials.

Stockdale, the son of former champion Gippsland apprentice, now trainer Frankie, had Avon Country beautifully positioned behind the speed, got a nice run through on straightening, and punched him out for a popular victory.

The Brenda McPhan trained Chill Joy ran on late from the tail of the field, while Belcielo ducked through for third at the death.

Another prolific picnic circuit winner, Katrina Rose trained Scoring, covered plenty of ground with limited cover, made an early run and looked the winner on the turn before finishing fourth.

The John Kilgower team is domiciled just outside of Traralgon, and makes the trip to Sale to complete fast work and track gallops.

The Kilgower stable is currently involved in a tight battle for a second straight Picnic Trainer of the Year award with Seymour based trainer Mark Thomas, who currently leads by one win.

Avon Country will have a couple of easy days, before a likely 0-58 1100 metre race at Stony Creek on Sunday 8 March.

LEN Xuereb trained Pixilicious returned to her best with an impressive victory in the 0-58 2400 metre race in sweltering conditions at Moe on Sunday.

Emotions ran high in the mounting yard as the six year-old Not A Single Doubt mare returned to scale with victorious jockey Dean Holland aboard, as the juicy winning price of $19 was the furthest thing from connections’ minds.

Pixilicious is owned by the patriarch of the famous Moe Xuereb racing family Rocky and his son Ray, a former leading picnic jockey.

“Dad is very sick with cancer, he’s in palliative care in hospital, he hasn’t got long to live and it was so good that Pixie won for him, he will get a real kick out of it,” stable representative Lydia Xuereb said.

Rocky Xuereb trained many winners over a number of decades from his base at the back of the Moe racecourse.

He always had a horse in his stable capable of winning a race, often a hurdler or steeplechaser.

Three of his sons have been jockeys – Ray, Rocky and Winston – and another a successful trainer Len, while daughter Lydia has been a key member of the Rocky and Len Xuereb stables her whole life.

Lydia reported it had been smooth sailing with Pixilicious in recent times since she was cast in a stall after running second at Woolamai on 17 January and had two weeks off as a result.

She also missed the Balnarring Cup after a hematoma was found under her groin.

She returned to racing this month at Moe with an encouraging fourth over the 1600 metres, and was immediately set for Sunday’s race.

Pixilicious settled back near the rear, covered plenty of ground, was exposed a long way from home, but ran the 2400 metres right out to beat Savvy Kingstonette and Callmedan who were good late.

The Darren Weir trained To Do had limited luck in the last 500 metres and finished fourth.

Pixilicious now has 38 starts for three wins and eight placings, and has taken her prizemoney to $52,785.

It is now likely that Pixilicious will contest a 2400 metre race at a Sandown midweek meeting, with the possibility of pushing her out to compete in a 3000 metre race at Moonee Valley in the coming month.