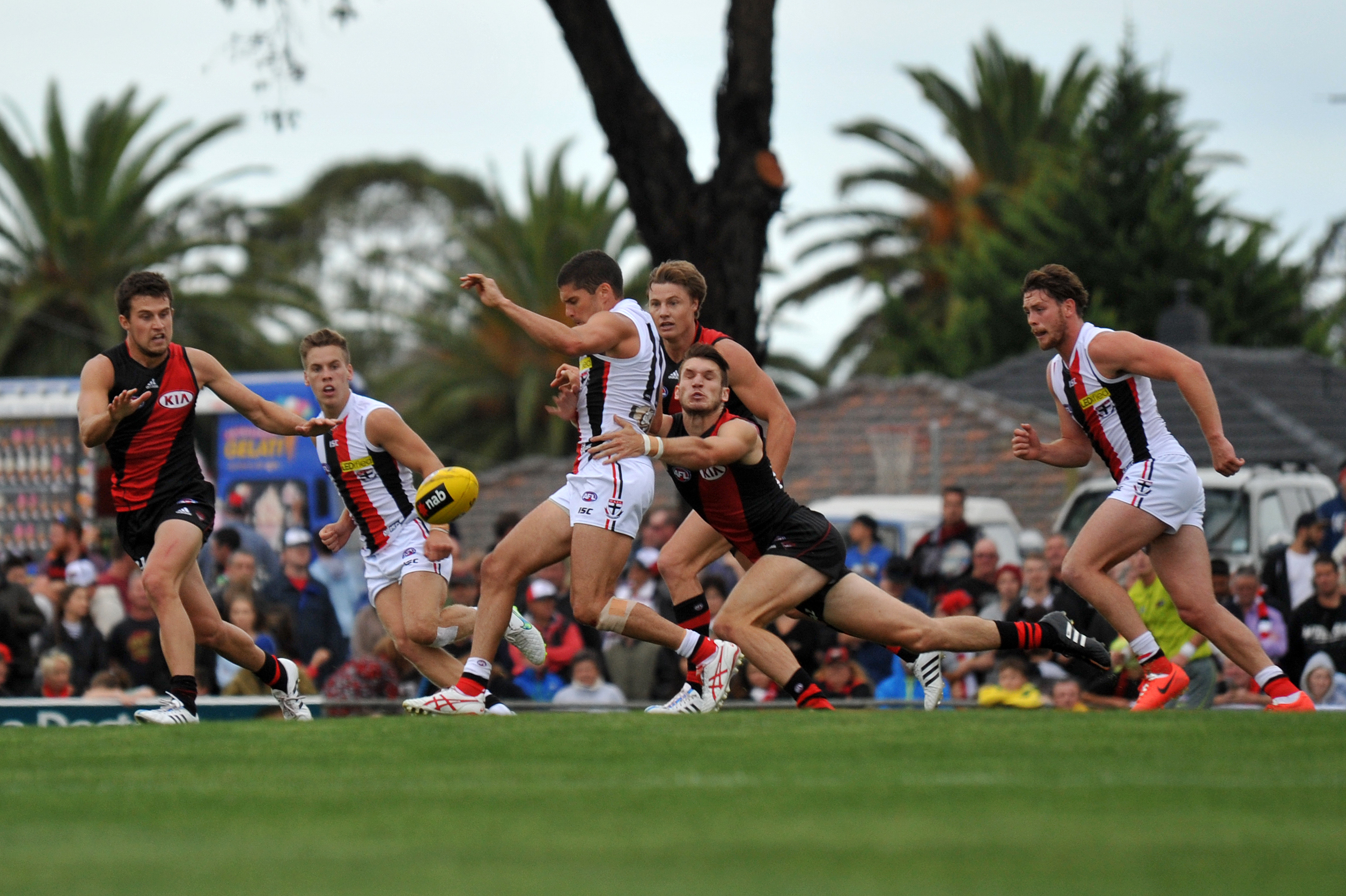 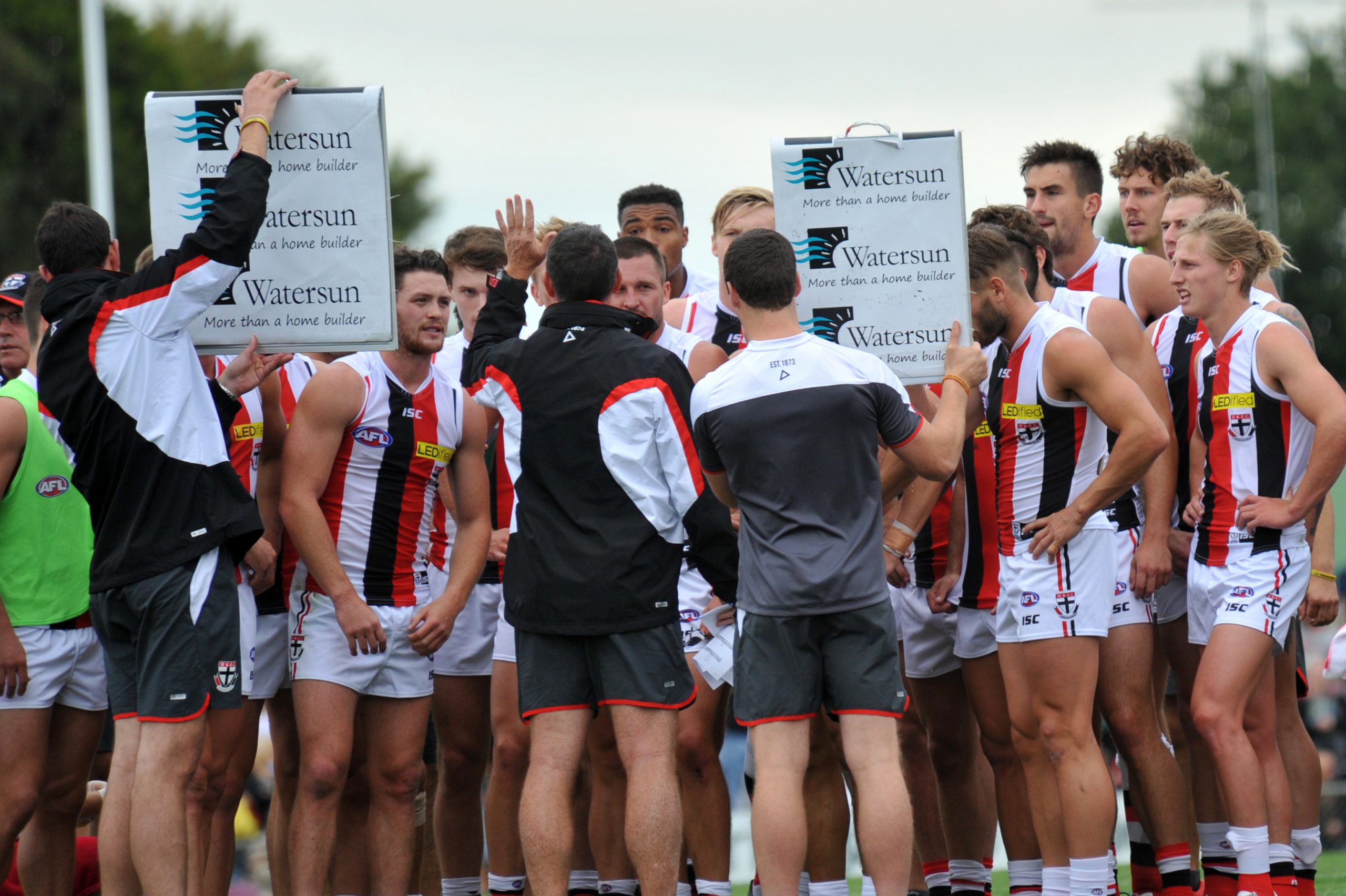 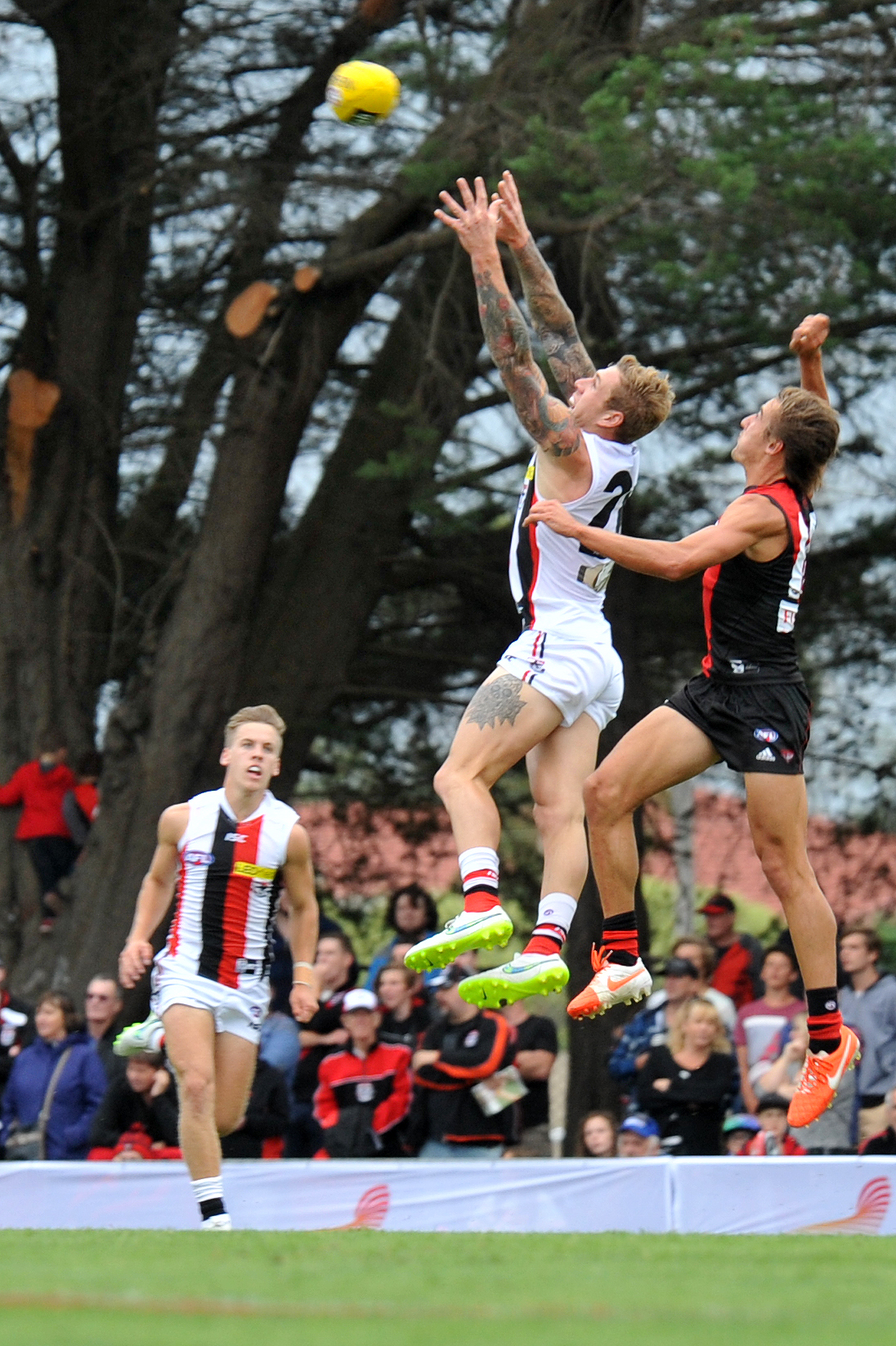 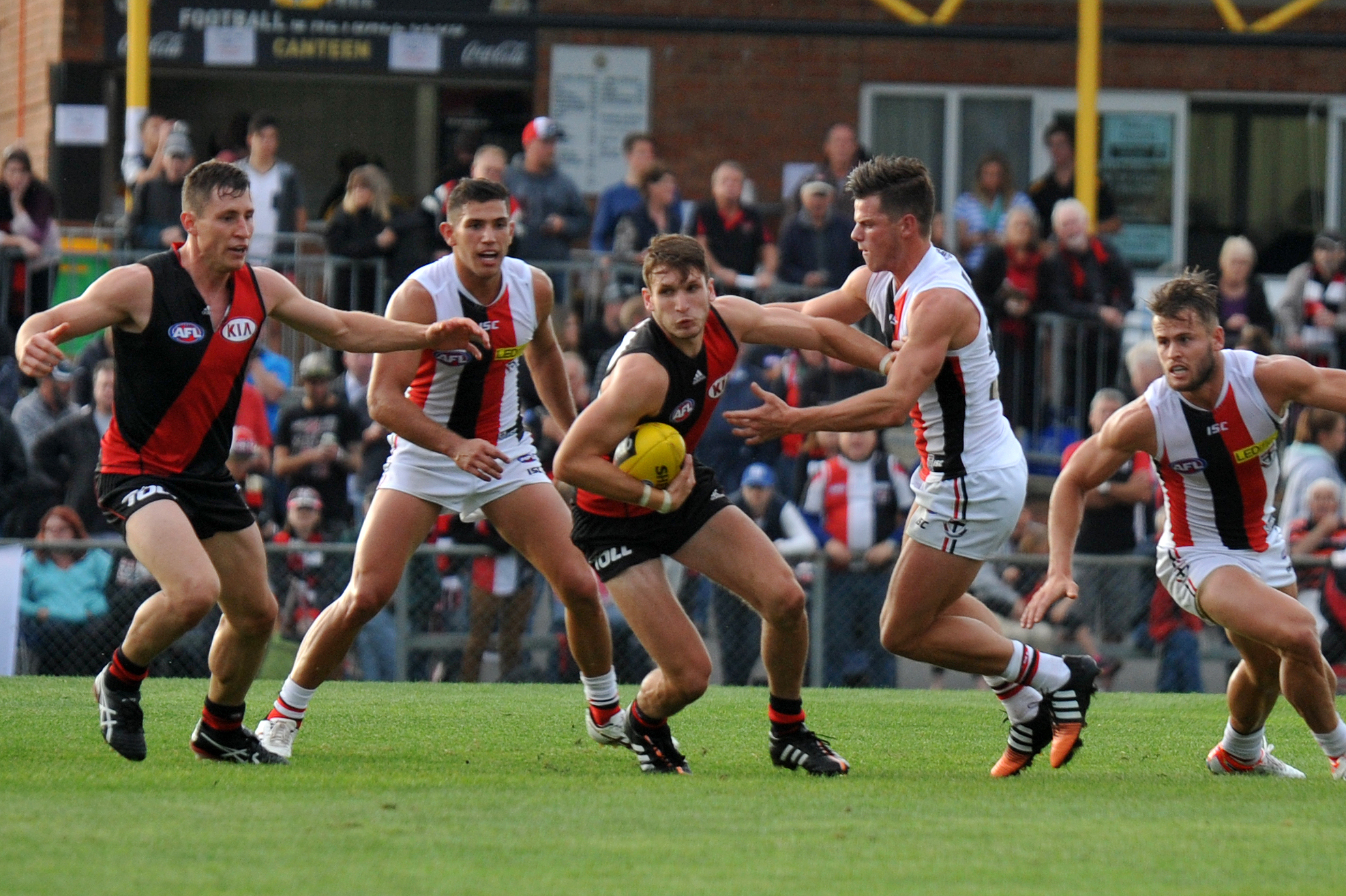 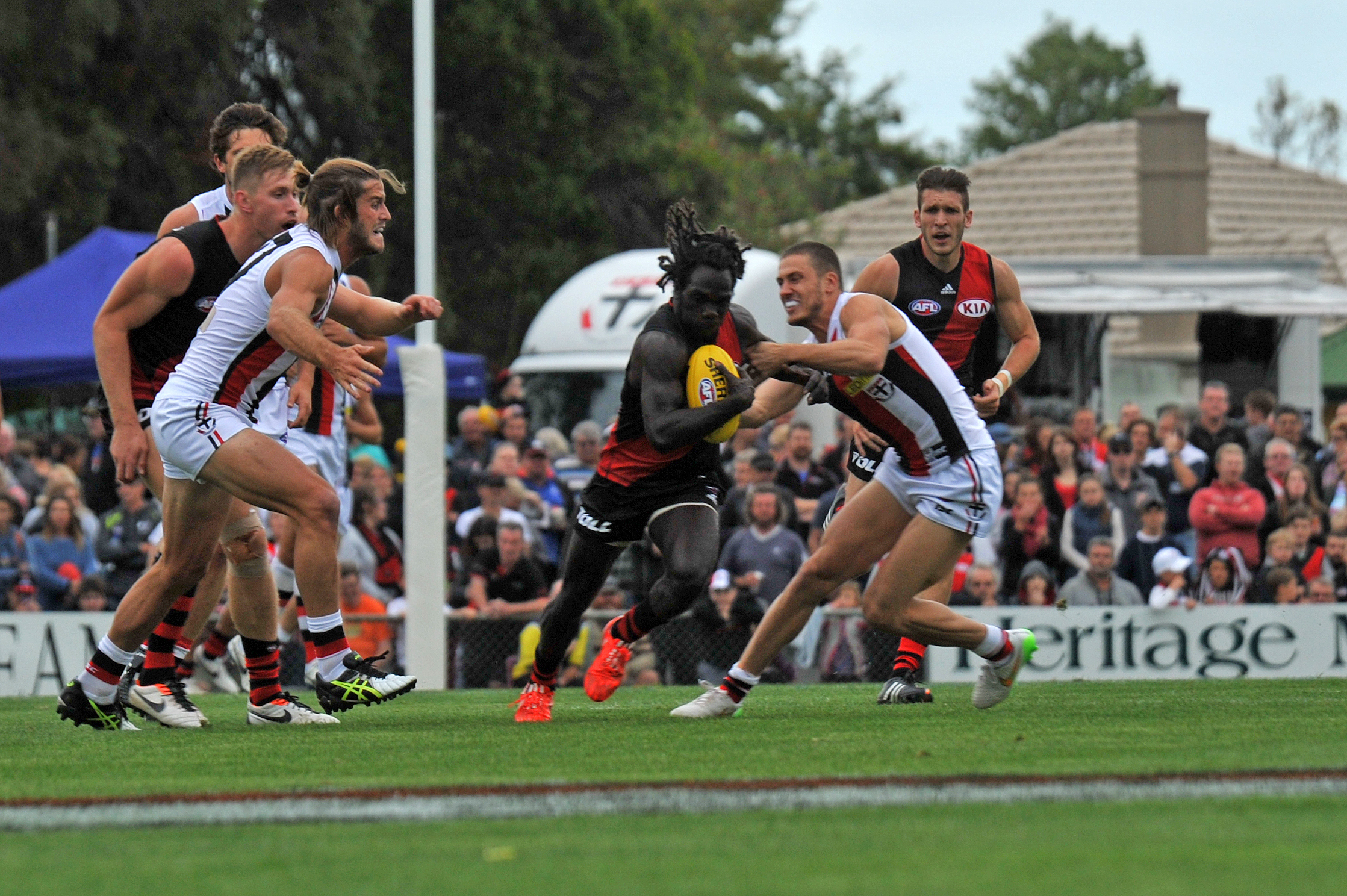 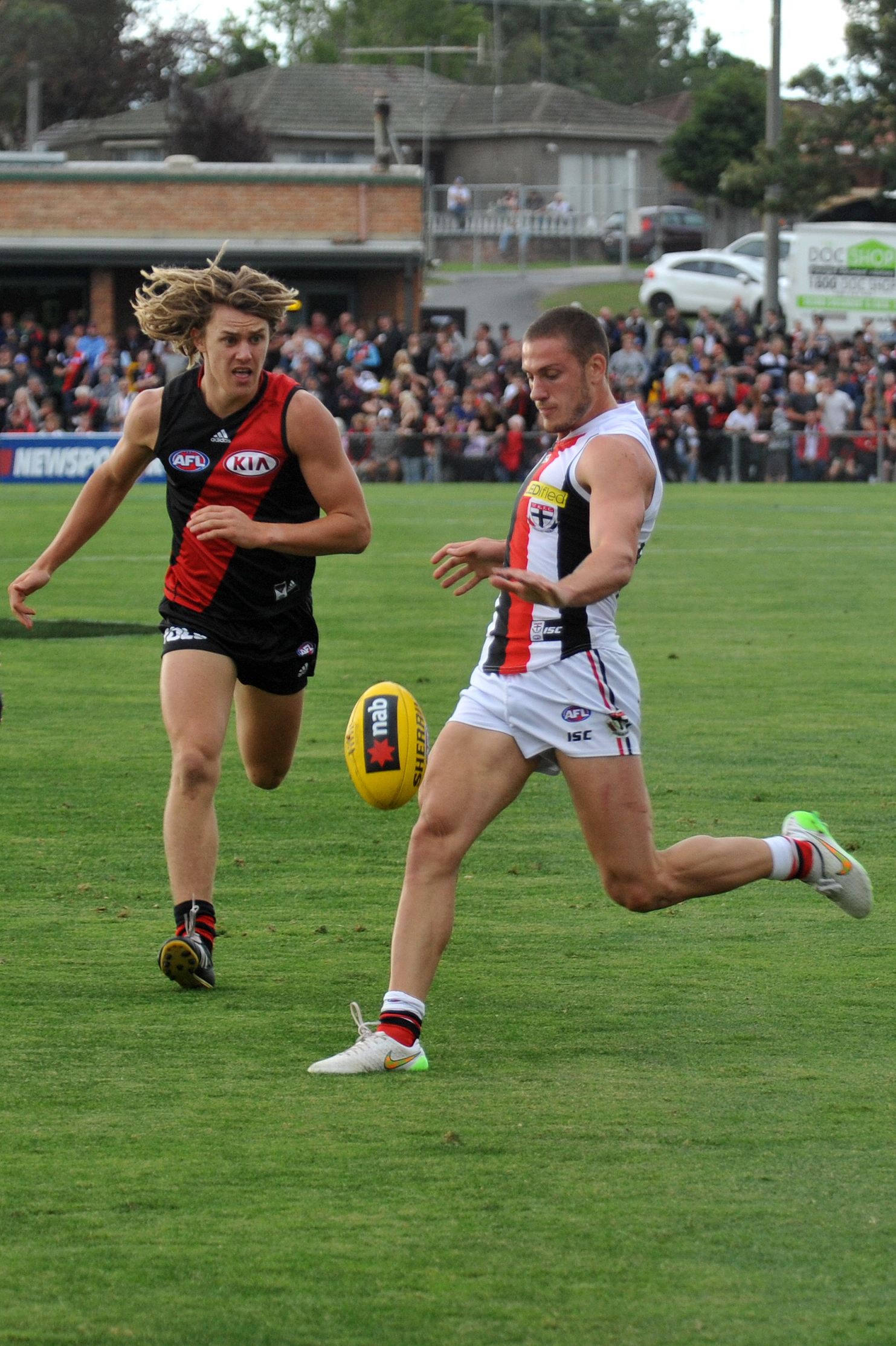 A HEALTHY crowd of 5542 turned out at Morwell Recreation Reserve for a twilight AFL pre-season fixture straight out of the Twilight Zone between St Kilda and Essendon on Saturday.

With a bulk of Essendon’s senior list missing due to ongoing anti-doping investigations and a number of ‘top-up’ players enlisted, it was far from a full strength Bomber outfit which took to a lush field produced by Morwell ground staff for the encounter.

Saints coach Alan Richardson admitted his side was on a “hiding to nothing”, given anything but a win against the rag-tag opposition would have been considered an utter disgrace, while returning Bomber boss James Hird struggled to answer what the club could learn with just a handful of its best 22 available.

“I basically said ‘guys this is probably never going to happen again in your footy lives’ this was quite unique, it was a bit of a challenge,” Richardson said.

“If we won we were supposed to win, if we lost it was going to be a disaster – there was no doubt there was a challenge for the playing group and I was pleased with the way they responded.

“Instead of panicking and becoming conservative late… they played to win.”

Hird too was reserved in his assessment.

“It’s hard to know what we want out of it really,” he said.

“Our listed guys got a run, got some conditioning and they played in a competitive match which is great, but I suppose we’re treating this as a mini-team at the moment and that team had a run together, they enjoyed it, they’ll be better for the run and they formed a bit of a bond.

“I didn’t have any (expectations). Guys came into the club probably a week ago and in terms of the game plan it was very basic.”

Absurdity aside, the Latrobe Valley crowd was rewarded for its patronage with a closer than anticipated clash.

St Kilda led by just 17 points at the final change, before AFL fitness and conditioning saw the Saints skip away by 50 at the final siren.

Signs were promising for the cobbled together Dons in the first.

After absorbing early St Kilda pressure they should have responded with the first goal when Anthony Tipungwuti’s fancy footwork from midfield led to a soccered behind at point blank range from stand-in skipper Paul Chapman.

Jason Holmes booted the first for St Kilda when he found himself unmarked on the 50 metre line and converted, before Jason Ashby responded with a 50m set shot at the highway end of the ground.

A cagey first term ended two goals each, with St Kilda’s extra behind putting it just ahead.

Rookie list pickup Ahmed Saad, returning to the Saints after 18 months in limbo, showed he still had value, turning on the pace 75m from goal before hitting the upright to register the first score of the second term.

For a moment the circus surrounding the fixture was manifested on field, when Essendon’s Conor Mckenna was gifted a possession in midfield from a woeful Saints pass, only to give the pill back by forgetting to take a bounce in his ensuing run.

Two 50 metre penalties were immediately offered to St Kilda, allowing Cameron Shenton to boot a major from the goal square to draw the lead out to eight.

Thankfully such incidents were isolated, and the Dons’ quality shone through when impressive youngster Ashby gathered in a spectacular diving mark to provide for Elliot Kavanagh who split the sticks from 50m.

Traralgon local Tim Membrey tried to get in on the act for the Saints, taking a strong overhead mark 45m from goal, but a wobbly old kick sailed through for a behind at his Gippsland Power home ground.

Membrey turned provider minutes later; after taking a juggling mark the half-forward dished to a leading Sebastian Ross who did the rest, sending the Saints into the break ahead 6.5 (41) to 3.2 (20).

Long and direct play from Essendon gave Shaun Edwards two goals in five minutes to start the third term, separated by a major at the other end by Blake Acres.

Jack Sinclair snapped a stunning goal to restore the Saints’ half-time advantage, and Membrey attempted to follow suit with an overhead snap smashing into the post for his second point of the contest.

Jonathon Giles reeled in a miracle mark around his opponent’s body and kicked true on an acute angle to keep Essendon in the match at 6.2 (38) to 8.6 (54) as the Dons absorbed a period of sustained pressure without conceding.

The drought was broken on the break by Darren Minchington, after Membrey held up his handpass nicely to catch out a scrambling Essendon defence.

Only 17 points separated the sides at the final change, but five unanswered goals to the Saints illustrated the gulf in class and fitness in the final term to set up a 50-point win.

Fittingly Membrey kicked the first of them at his former stomping ground to send the Saints marching to a big, albeit expected, victory.

St Kilda did enough on the day with several of its number showing good form throughout.

Leigh Montagna stamped his authority on the contest in the second term with 13 possessions at near perfect efficiency on his way to 27 touches in total, while hulking United States basketball import Holmes showed promise.

Jack Steven (22) and Jarryn Geary (23) led the midfield charge with support from an impressive Jack Lonie who managed 17 disposals and a goal.

A hamstring injury to Ross sullied the result, with several Saints including Farren Ray and Jack Billings now sidelined ahead of season start.

While Chapman and Giles were about the only members of the Dons’ best 22 to take part, there were encouraging signs from ‘top-ups’ Clint Jones and Marcus Marigliani across the midfield with 22 touches apiece.

BEING perched in a corrugated coaches’ box was unfamiliar territory for returning Essendon coach James Hird, but it rang of fond nostalgia when Essendon clashed with St Kilda at Morwell Recreation Reserve on Saturday.

Hird lauded the facilities at Morwell, where 5542 spectators turned out for an unusual NAB Challenge match bereft of the bulk of the Bombers’ senior list.

“The people here in Morwell were terrific, the ground was in exceptional condition and the facilities amazing so congratulations to the people of Morwell,” Hird said.

“I think AFL clubs realise they have an obligation to go and play games to as many people as they can at this time of year and I think everyone embraces it.

“The NAB Challenge series is exactly what it should be, it’s about getting football, getting the brand out to as many people as possible.”

THERE was no Dyson Heppell in action for the Bombers against St Kilda, but the next best thing made an appearance on Saturday evening at Morwell.

Spectators could have been forgiven for mistaking the trademark dreadlocks for the more famous Heppell when he ran on in the third quarter, but it was younger brother Aaron getting his chance from the VFL list.

The Leongatha local received a huge cheer from the Latrobe Valley faithful when he was introduced just ahead of three-quarter-time, and the ex-Gippsland Power star was solid with limited game time.

Roaming around the half-back flank, Heppell made four disposals and a tackle, looking composed in the senior ranks.

“Aaron plays for our VFL team so we see him most days, we know the family pretty well… it’s an outstanding family and obviously Dyson has been exceptional for our club on and off the field and I think his brother is in a similar mould,” Hird said.

“He’s not quite where Dyson is as a footballer just yet, but as a person he’s a quality person so we’re rapt to have him with our VFL team and we’ll keep giving him the opportunities when we can.”