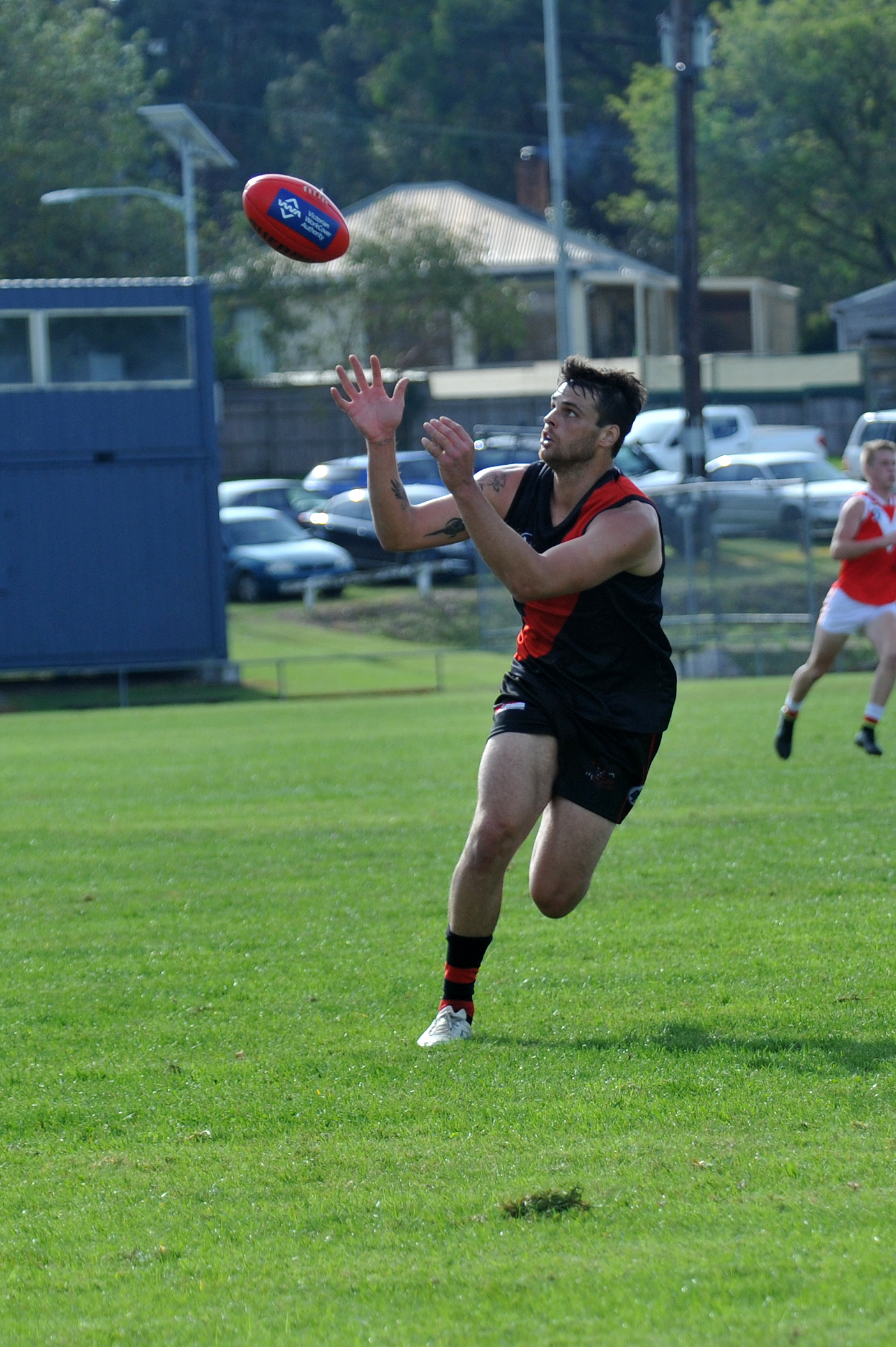 THE competition’s top six sides will do battle this weekend in a defining round of North Gippsland Football.

Over the past 24 rounds Heyfield has been the front runner of the competition, however Saturday saw the side enter unfamiliar territory.

Dropping only their second match in as many seasons the fifth-placed Kangaroos worked hard to hit the front in the final term but failed to halt Yarram’s run in the dying stages of the match.

This week last year’s runner-up will host another side growing in confidence.

Sale City has moved clear at the top of the North Gippsland ladder and could well deal Heyfield the same hand as the Demons did.

Sitting with a 4-0 win loss ledger, the Dogs coach Hayden Burgiel was not prepared to give too much away too soon, noting his side was “going okay”.

“We haven’t been near our best side yet, we will have a near full side this week with Jake Schuback in and David Piasente will be back from a week’s break after deciding to rest him to get him up and ready for this week’s match,” Burgiel said.

It is a frightening prospect for opposition sides that the Dogs are yet to field a full strength line-up, given the scalps claimed so far include wins on the road against second-placed Rosedale and the reigning premier Churchill.

Highlighting it had been some time since Sale City scored bragging rights over Heyfield, Burgiel will again look for the drive and hunger to come from the side’s younger players.

“The side’s pretty excited and hungry for success, the younger guys are certainly driving us to do well. They (the younger players) are the ones that are doing all the consistent running, we rely on them to provide a fair bit of the drive,” Burgiel said.

“We match up pretty well in most areas against Heyfield, picking up ruckman Harry Kaandorp has been a bonus which allows us to push Mat Lutze forward which will likely provide some headaches for Heyfield’s defence but likewise they have many options up forward too, which will be difficult to cover.”

ON the back of a comprehensive 100-point win, Churchill is hungry to claim a top five scalp after dropping the points against Heyfield and Sale City in the opening month of competition.

While pleased with the progress and improvement his side was making, coach Allan Chandler admitted the Cougars would be pushed by third-placed Traralgon Tyers United this week.

“We are slowly improving each week, and obviously hope to knock a side off in the top five,” Chandler said.

“TTU are travelling extremely well and from all reports are playing a very attractive brand of footy. We will need to be playing at our absolute best to get the points this week.”

Blooding several younger players on the club’s list in past weeks due to injury or unavailability has provided Cougars supporters with a taste of the future, and the stocks are good.

“We have taken the opportunity to blood some of the younger players in our list early on and some players like James Allan and Ben Skinner, who kicked five goals last week, have shown that they are ready to play senior footy,” Chandler said.

“We had only six players over 22 in the line-up against Woodside last week.”

Similarly placed, the Bombers also have a young list relishing their roles under coach Jay Neagle.

Coaching from the sidelines through injury Neagle will no doubt address the inaccuracy in front of goal this week, after putting up 52 scoring shots for a return of 22 goals.

COWWARR will aim to rebound when it hosts Woodside, which takes to the road following a 100-point drubbing at the hands of the Cougars.

Matching their higher-ranked opponents at times in round four, both sides will need to refocus and take their chances to remain in the hunt.

Sitting side by side on the premiership ladder standings in seventh and eighth place respectively, with just one win each to date, plenty is at stake for both outfits with spectators set for a high quality contest that will go down to the wire.

HAVING sealed a third straight victory in a classic battle, Rosedale needs more of the same tenacity to hold Yarram at bay.

The Demons come into Saturday’s showdown against the Blues on the back of arguably the club’s biggest win since crossing to the league last season.

“We didn’t beat them last year, so for the boys to peg back the lead after Heyfield had hit the front in the early stages of the last quarter and then kicked a goal clear was really encouraging. Even more so when Grif Underwood and Jarryd Swift were on the bench late in the game,” Pavey said.

“The guys linked up well, hunted, and applied pressure, it was a real team effort. You look at the start of the season and pencil in a few games, and you hope to break even. Our win loss ledger is positive, I am definitely happy with where we are at.”

Playing two sides at the top end of the premiership ladder standings in consecutive weeks on the road is a tough ask for any side but in their current form expect the Demons to push for another upset.

“It is good to get the win away, they then have to come over to your home ground in the second half of the season knowing the result first time around, it always makes it harder,” Pavey said.

The concept was borne several seasons ago after the clubs decided to honour two individuals who have made extraordinary contributions to their clubs and the league by striking a trophy which would replace the Gippsland and Northern Cup contested for 25 years. The honours favour the Tigers who over the past 10 seasons have well and truly had their arch rival’s measure, including a win last Mother’s Day.