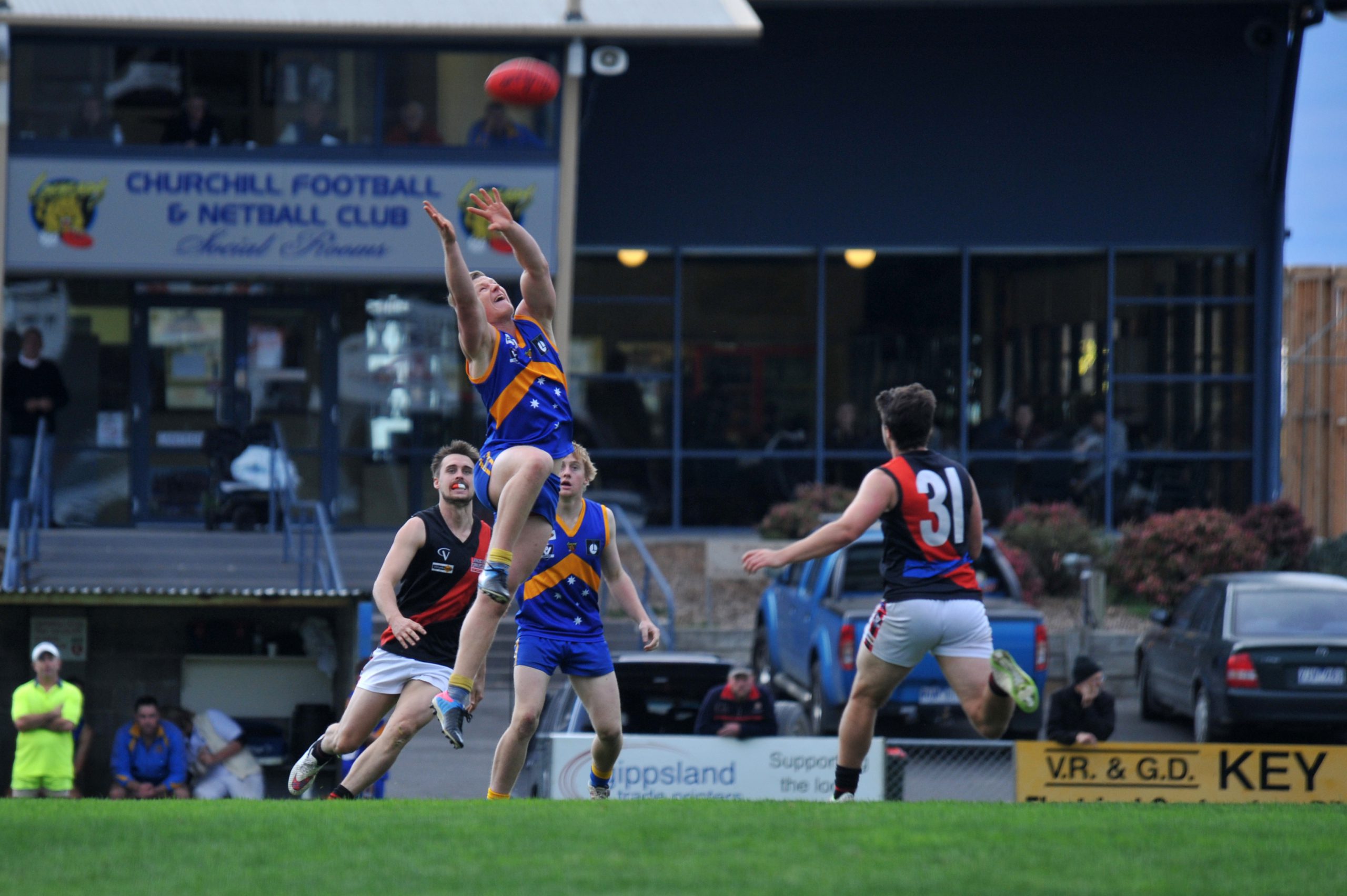 SALE City was handed its first defeat of the North Gippsland football season 2015 at the hands of last year’s grand finalist Heyfield, engineered by a seven-goal-to-two second term from the Kangaroos.

Boasting an eight-match winning streak over the Dogs, Heyfield started slowly against the ladder leader in a physical opening 10 minutes of play.

After winning the toss, City captain Matt Lutze elected to use the wind advantage first and the visitor was quick to capitalise.

Breaking the Dogs’ strangle hold, a strong lead and mark by Daniel Stubbe resulted in the key forward booting Heyfield’s first late in the term.

It started a procession of majors for the Kangaroos, as they mounted a one way traffic offence on the opposition.

Daniel Stubbe’s opener was followed minutes later by a major to Jesse Jackway and a 50 metre penalty gifted Josh Stubbe the home side’s third straight before a second to Daniel Stubbe.

The quarter-time break did not halt the Kangaroos as Kodie Woodland scored from the opening centre clearance.

From there it was a brutal second term for the Dogs.

Daniel Stubbe soared over the pack to split the sticks, before Jordon Stubbe scored on the run from the pocket.

Lutze reeled one back for the Dogs, but with frustrations boiling over, resulting in 50 metre penalties, Heyfield was having the last laugh.

Luke Pratt registered his first of four for the afternoon following a gifted major.

He quickly followed up with his second, before another to Heyfield.

Scoring dried up in a tight third term; City was out of the blocks to open with its first before Heyfield slotted another two to make the margin 44 points at the final change.

The final term belonged to City, which outscored Heyfield four goals to one, with two late in the match.

But there was no way to overturn the damage done in the second term.

Andrew Lambie was a standout for Heyfield, creating run off half back and rebounding his side forward time and time again.

Kodie Woodland found plenty of the ball and proved a challenging match-up for City, while Pratt was strong on the lead and made the most of his opportunities in front of goal.

For City, midfield specialist David Piasente came in refreshed from a week’s rest to dominate and his ferocious tackling was a hallmark of his performance.

Evan Johnson impressed, Rowan Bell was dogged throughout the contest and Ben Chivers was a workhorse down back.

YARRAM cemented its status as comeback king when for the second week running it rallied in the final term to overrun a higher-ranked opponent, this time Rosedale.

In an arm wrestle of a contest the visiting Demons went into the main break 19 points ahead.

However, the lead was short-lived as the Blues surged in the third term to post 6.4 (40) to 3.2 (20) and wrestled back a one-point advantage at the final change of ends.

With their noses in front the Blues, led by best onground coach Ben Macreadie, registered the first two of the final stanza to create a buffer, before being overrun at the final hurdle.

Louis Rodaughan starred for the Demons in a best on ground performance, defender Chris Pettitt led the back six with poise and Grif Underwood made his presence felt in the engine room.

For the home side Dale Fleming and Luke Stuckey were the pick of the goal scorers with two apiece, with Fleming’s pace creating many an opportunity for the Blues in the centre clearance count.

A 12-goal-to-five opening half set the tone for Woodside which eased to a routine victory over Cowwarr.

Having won on their last two visits to Cowwarr, by margins of 24 and 60 points, the Wildcats were again on song from the opening bounce at the Cowwarr Recreation Reserve.

The assault on the scoreboard was led by 10 individual goal scorers for the Wildcats, including bags of five from best on ground Tom Love and coach Daniel Risol.

A strong showing in the opening half was equally matched in the following terms with the Saints’ defence conceding a further 10 majors after half-time.

Love was damaging in the forward 50, Risol continued his solid form of the opening rounds, racking up possessions, Shane Kilgower impressed with his ability to set up forward play and force turnovers to rebound the Wildcats forward.

The loss was the Saints’ fourth in a row and a missed chance for the home side to reclaim winning form ahead of next week’s clash against the Bombers.

CHRIS Weller led Churchill to a second straight win with a best on ground performance to earn the ‘Crocka Medal’ in memory of former club champion and life member David “Crocka” Williams.

The home side started strong against Traralgon Tyers United, quick to hit the board with youngster Kurt Holt adding two majors while a snap across goal from Nick Celima handed the Cougars a 17 point lead.

A goal on the run from TTU’s Matt Stolarczyk settled the visitors in the second quarter, before Guy Sinclair hit the board with his first of his four, and captain Luke Middleton kept his side within arm’s reach ahead of half-time.

The third term belonged to Churchill, with one man standing out from the pack.

Chris Williams booted three in a blinding 25 minutes of play.

The Cougars’ barnstorming nine-goal term was finished off by Tim Darby’s third for the match after the siren.

TTU ruckman Middleton imposed himself in the final term, coach Jay Neagle moved on-baller Stolarczyk down back with impact and while they challenged, Nick Campbell’s first goal for the afternoon halted the Bombers’ run.

GORMANDALE claimed bragging rights in the bottom of the table clash against arch rival Glengarry in yesterday’s Sunday fixture.

With scores locked at the first change, the Tigers clawed away after quarter-time to run home comprehensive five goal victors.