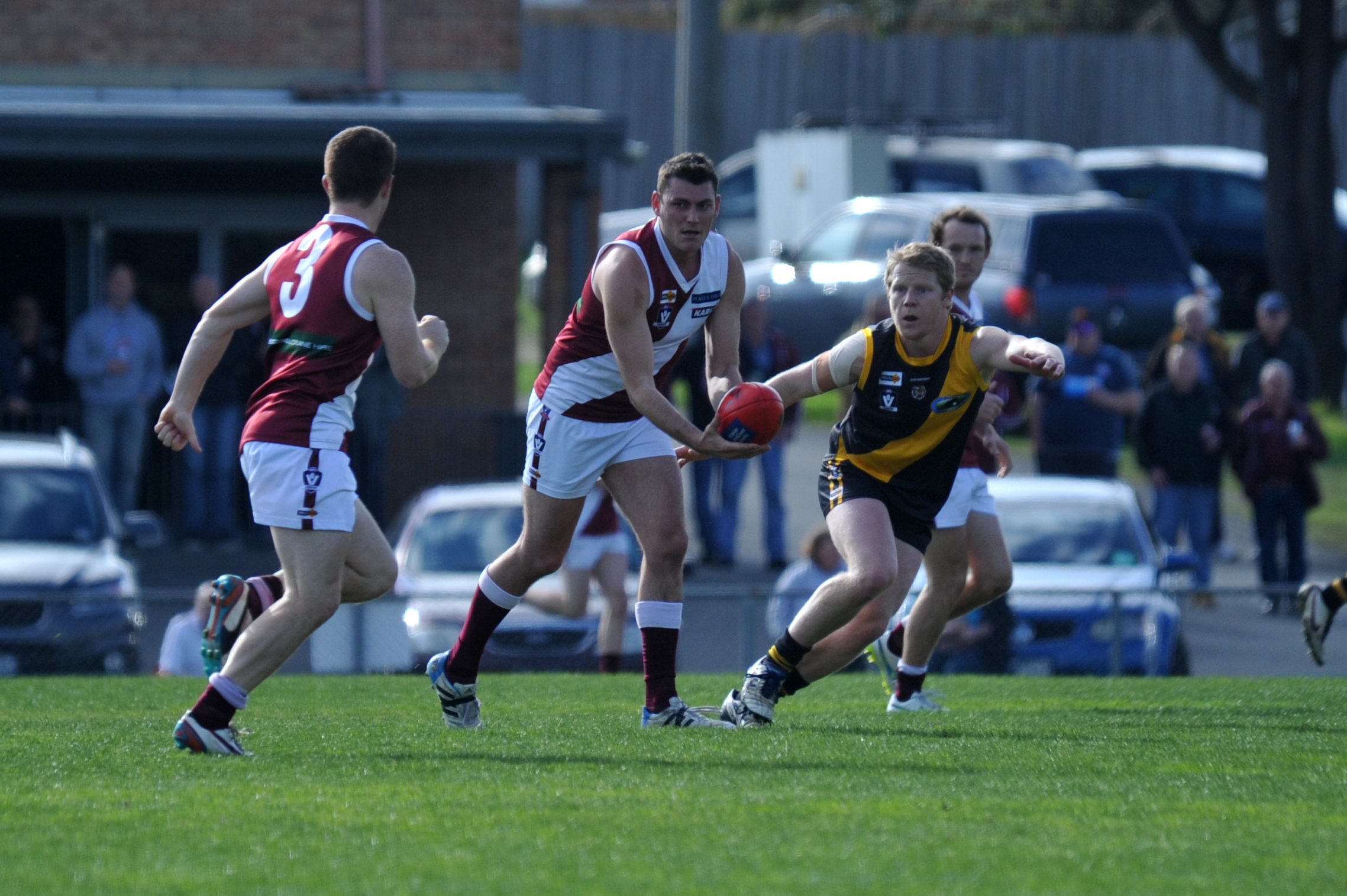 MORWELL’S finals chances are all but over after the two-time reigning premier went down to Traralgon by 28 points yesterday.

Barring an unprecedented winning scoreline in Morwell’s final game against Leongatha combined with a monumental loss for Sale, the reigning premier will sit out the post-season.

Tigers coach Joel Soutar, who took the reins early in the year after a tumultuous start to 2015 which saw Morwell sack its coach just a few rounds in, remained adamant there was still plenty to play for nonetheless.

“The season is over for us but it’s really important we finish off well against Leongatha next week,” Soutar said.

“The boys had a real crack today, but in the end it was too many turnovers that cost us the game.”

Traralgon led by 10-points at quarter-time and 13-points at the half.

It was a similar story at the final change, which saw the highly fancied Maroons hold on to a 14-point lead.

Traralgon booted four goals to two in the last, to run out a 28-point winner and in turn prevent its rival Morwell from playing finals in 2015.

“Hopefully we can keep the group we have got together and recruit the players we need to come out better and stronger next year. We have a massive pre-season ahead,” Soutar, who has signed to coach the club for another year, said.

The Maroons are now certain to finish in the all-important third spot on the ladder, ahead of the start of finals in a fortnight’s time.

Former coach Josh Jennings led the charge for Traralgon, with three majors, while back from the VFL Matt Northe was named best on ground.

LAST year’s runner up, Wonthaggi will finish 2015 in fourth after notching up win number 11 for the year, by a thrilling five-points over Bairnsdale.

The home team led by a point at quarter-time, however the visitor took the reins in the second; kicking six goals to three to take a 20-point lead into the main break.

The tables were turned again in the third, with Bairnsdale kicking six goals to four, to trail the Power by just two kicks at the final change.

The Redlegs outscored its highly fancied opponent in the last, however it was too little too late, with Wonthaggi holding on to win by less than a kick.

Leongatha maintained top spot and at the same time ended Drouin’s chances of a finals berth in 2015, with a big win in the battle of the birds.

Jake Best was once again a star for the Parrots, a bag of seven goals contributing to his side’s 14th win of the season, to the tune of 70-points.

Cade Maskell also managed five for the visitor, which dominated from the outset.

The pair was among Leongatha’s best players, with Chris Verboon taking the overall honours.

SALE remains in the all important fifth position on the ladder, after thrashing Moe by 166-points.

“The win does give us a little bit of breathing space in fifth, but we just want to keep winning and building momentum,” Sale coach Travis Ronaldson said.

Led by Brad Dessent and William Stephenson, who kicked a bag of 10 between them, the Magpies had 10 individual goal kickers.

“A really pleasing aspect of the win was the contribution of some of our younger players, who are providing us with lots of run and energy,” Ronaldson said.

MAFFRA remains in second, a game and percentage behind Leongatha, with one round of the home and away season to go.

It comes after the Eagles handed bottom of the table Warragul a 180-point thrashing.

Flexing its muscle, the home team was led by its number one forward Darren Sheen, who kicked a bag of 13, while Andrew Petrou managed six of his own.

Maffra had 10 individual goal kickers, who together contributed 30 goals for the afternoon.