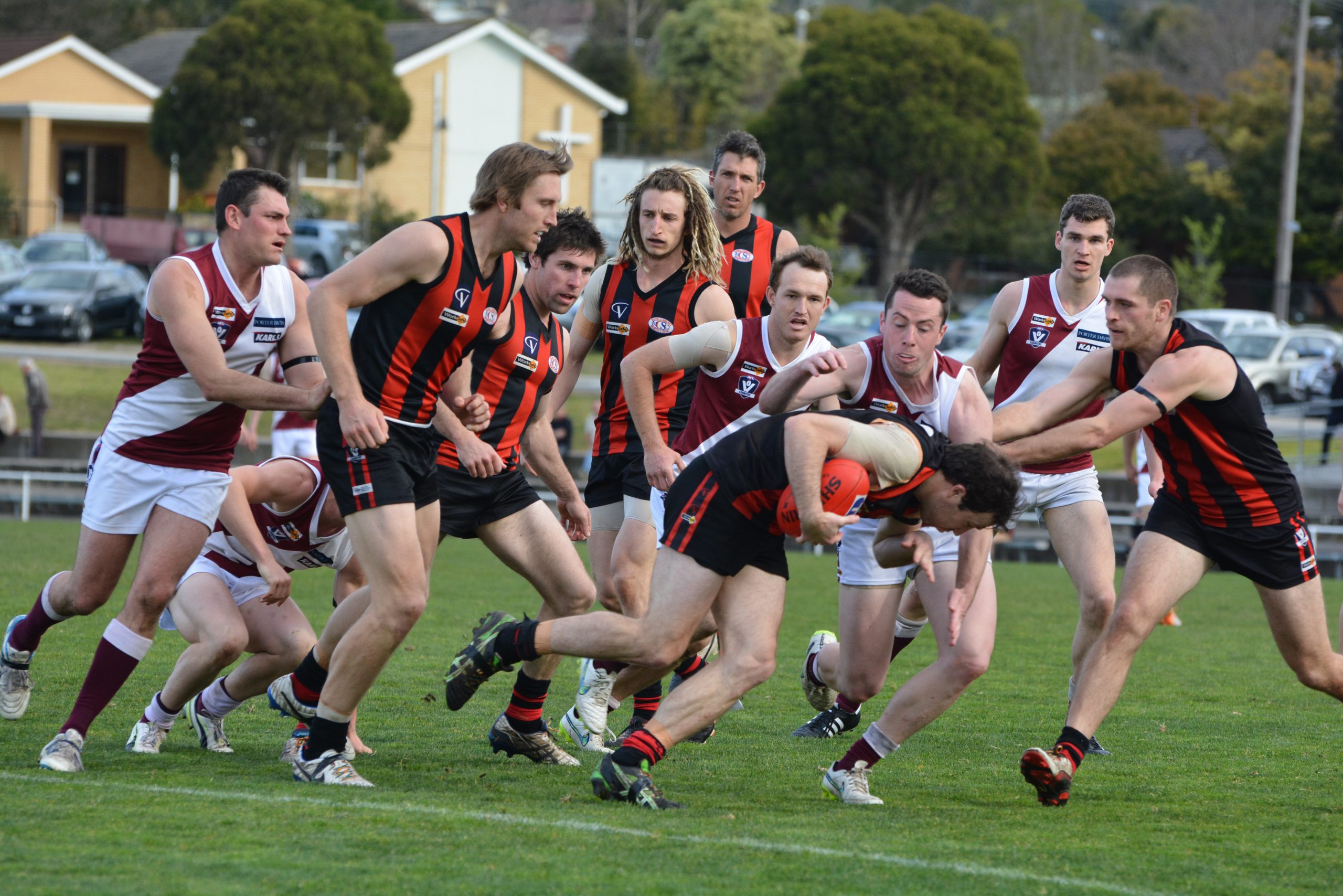 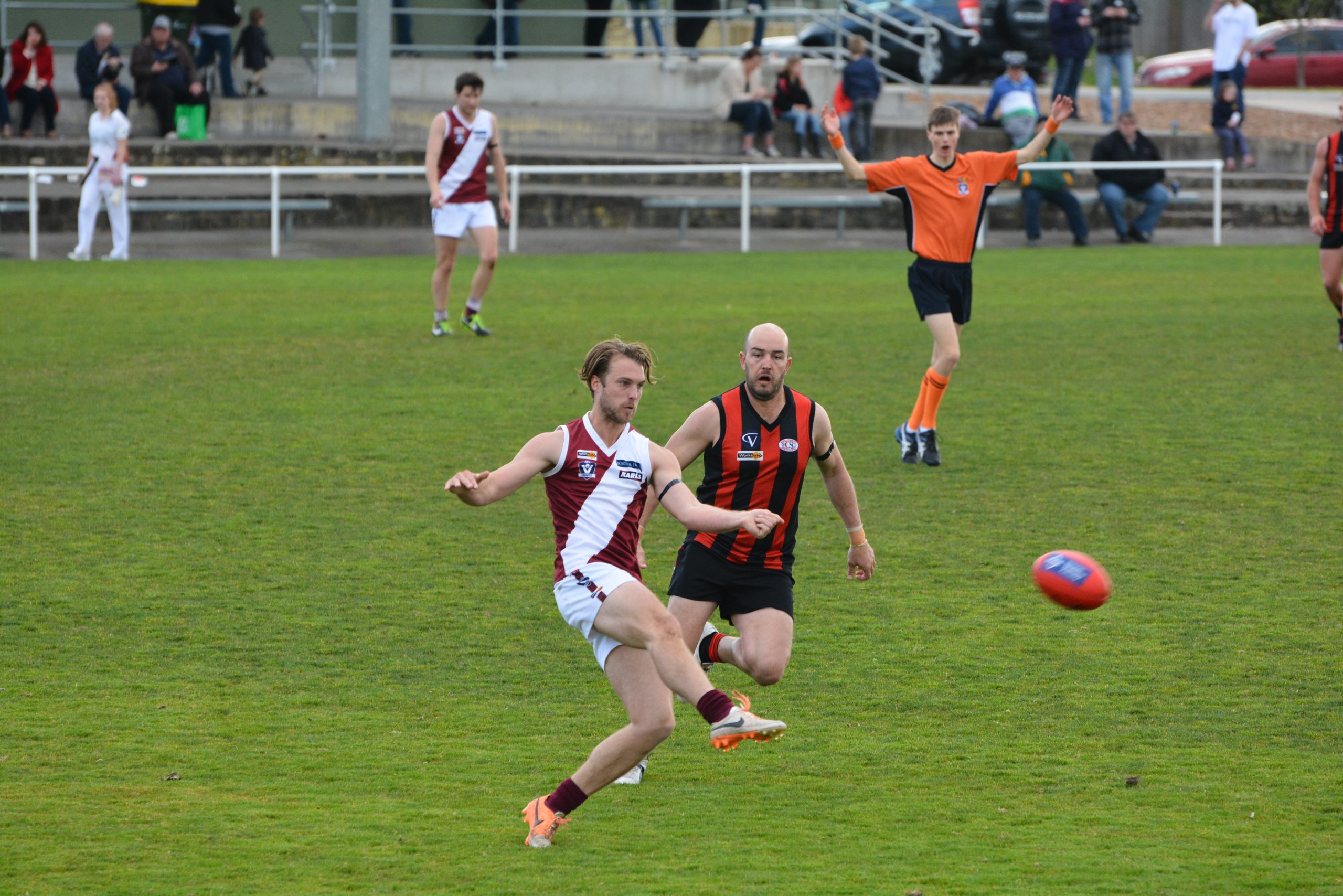 TRARALGON has earned the chance to play Leongatha for a spot in this year’s Gippsland League grand final, after defeating Maffra 14.13 (97) to 12.8 (80) in the qualifying final at Moe.

“We have two chances to make a grand final now and we are really excited,” Maroons coach Mark Collison said.

The Maroons celebrated their captain Michael Geary’s 200th game with a 17-point win in its first final of 2015.

“He’s our leader, our captain and every week he gives his all. He is inspirational, you always know what you are going to get from him… today’s was probably his best game of the year,” Collison said.

Traralgon got off to the better start and led Maffra by 10 points at quarter-time.

It was not all smooth sailing for the in-form Maroons, who lost former VFL player Matt Northe to a knee injury late in the opening term.

“He’s had a terrific year… hopefully he’s okay. He’ll have scans and we will see how he pulls up,” Collison said.

Despite losing Northe, the Maroons had by half-time extended the lead to 15 points.

Tempers flared at half-time, with players involved in an on-field melee.

Traralgon picked up where it left off in the third, booting five goals to Maffra’s three to take a 41-point buffer into the last break.

The Eagles outplayed their opponent in the last, kicking six goals to two in the fourth term.

However, it was too little too late with the favourite using up the first of its two chances.

“We obviously got on top of them pretty early, we ran them into the ground and the game was over pretty early… however, the injury and being left with two on the bench left us a bit tired towards the end,” Collison said.

“Sale got a couple of points up at one stage and it looked like they’d get home. To be honest we didn’t play great footy in that second half and Sale really did,” Power coach Rob Railton said.

“It wasn’t looking good, but the boys found a way.”

Earlier Wonthaggi got out to a stellar start, kicking five goals to one to lead by 26 points at quarter-time.

Sale outscored the Power in the second five goals to two to be within 13 points of the Power at half-time.

It left Railton far from impressed.

“We should have been up by a few more goals with the chances we had and we didn’t take them,” he said.

Adding three goals to two, Sale again had the upper hand in the third and there was just seven points in it at the final change.

Only two goals were scored in a nail biting last quarter.

There were however plenty of behinds, with Sale adding five to Wonthaggi’s one.

“Sale were really efficient going forward… they had a few shots and fortunately for us they missed,” Railton said.

“It really could have gone either way.”

It turned out to be a strong day for the club.

“We are really happy. Our reserves got through as well so we are really proud of them,” Railton said.

It’s straight back to work for the Power which has a date with Maffra this weekend.

“We have a great, young group… we now have a short week then we will have another go at Maffra,” Railton said.

Yesterday’s clash marked the end of the road for Sale, which finished the year in fifth.

Its finals loss was not without standouts, with Jason Gram and Brad Dessent booting three apiece, while Andrew Quirk was named the Magpies’ best.