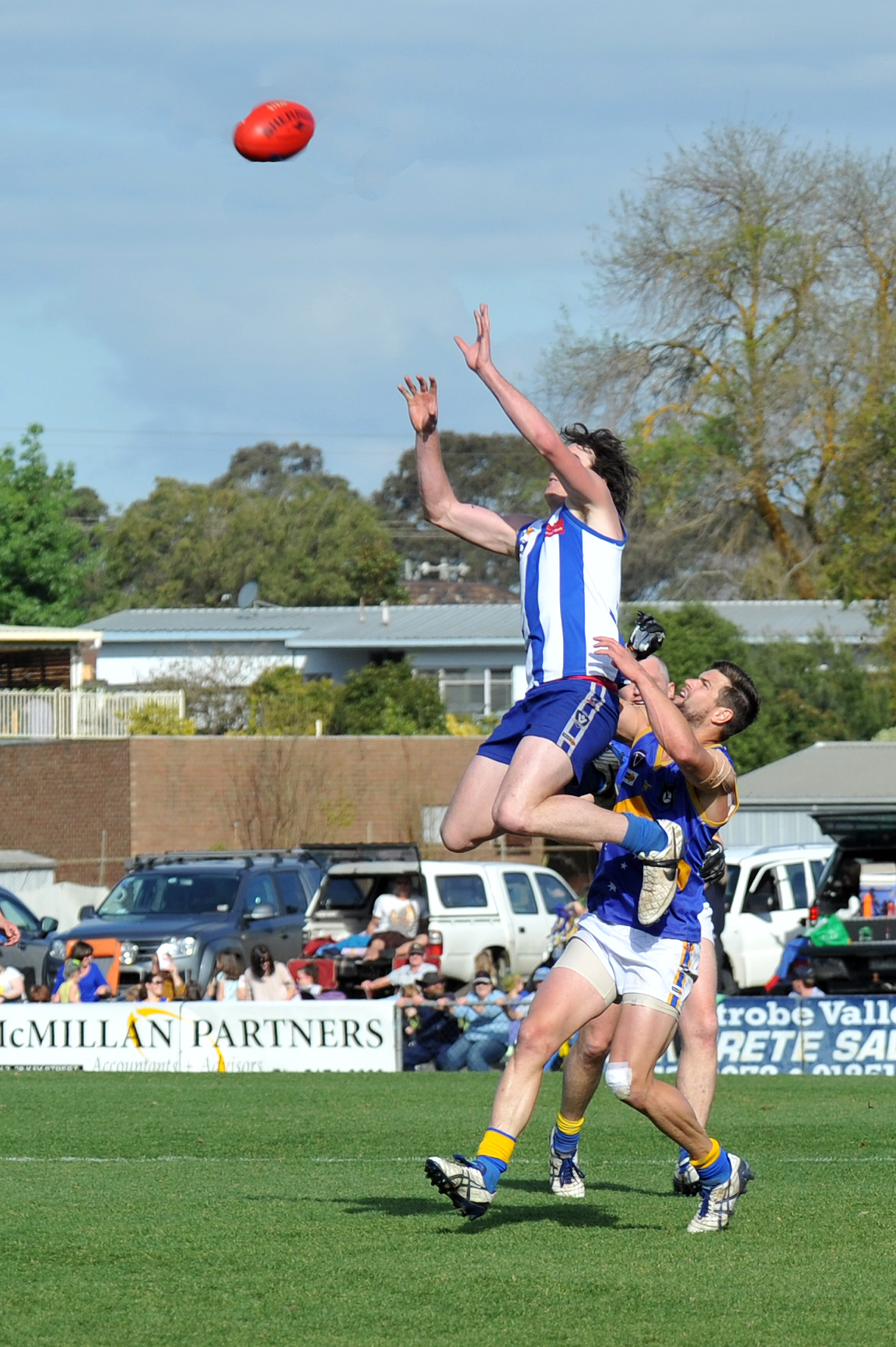 HEYFIELD booked its spot in a fourth straight North Gippsland grand final after rallying from behind against Churchill to win the preliminary, 22.21 (153) to 15.8 (98).

The Kangaroos will now meet minor premier Rosedale, the same opponent they battled for the premiership in 2012.

The preliminary promised plenty and delivered.

The reigning premier was first to settle as Nick Celima snapped the first major with less than a minute on the clock.

Brighton and Williams were busy, tallying possessions before Josh Stubbe combined with brother Daniel to send the Roos forward for the first time.

The Kangaroos created an opportunity to respond but Brown’s snap from the pocket missed to the near side.

It was followed by a strong grab to Bedggood from the resulting kick in and he quickly passed off to Cam Garrett who set up Brown for his second shot on goal, which hit the post for Heyfield’s second behind.

The Cougars’ backline of Dean DeGroot, Dale Paterson, Brayden Kokshoorn, Jordon Fenech, Tim Darby and Broadbent felt the effects of the Roos’ forward pressure as they locked the ball down in Churchill’s defensive 50.

Breaking free from defence, the Cougars supplied Brad Knowles who ran into an open goal to register his side’s second.

Trent Anderson and Daniel Stevens were working hard to chop the ball off as Churchill continued to push forward through Celima, Williams and Luke Brereton.

It took 10 minutes for Heyfield to break the run of behinds, with Beha taking a strong contested pack mark to go back and steady his side.

Brown, Bedggood and Jordan Stubbe all missed majors as the Kangaroos’ inaccuracy threatened to keep them out of the contest.

At the other end of the ground accuracy wasn’t an issue for Jenkins.

Coming into the line-up to fill the void of Brendan Holt, the premiership player registered three first stanza majors in succession, with his first at the 15-minute mark.

Churchill’s Knowles posted the first major of the second stanza after wasted opportunities at the other end saw two behinds added to the ledger.

The tables quickly turned, ignited by Bedggood – who thrilled with his aerial feats – the ‘X factor’ forward slotted through his first of four for the afternoon.

The desperation of the Kangaroos became evident; youngster Bailey Escreet led the charge with a chase and subsequent tackle on Towns to set up Bedggood’s second major on the run.

It would be followed by a goal to Jordan Stubbe which saw the margin reduced to two points.

In a rampant 20 minutes of play, the Roos slammed home seven straight majors.

Among the goals were three to Nick Dinsdale and two to Bedggood in a blistering eight goal to three term.

Heyfield’s half-time lead should have been even more substantial than 19 points given the midfield control and scoring opportunities.

It was wasted scoring chances, particularly in the first quarter, that left the contest in the balance with Churchill fighting back early in the third.

The defending champion nailed the first of the second half, before Brown took yet another powerful contested mark against Darby in the goal square to add to his match tally of five.

Churchill responded to position itself within 14 points at the 10 -minute mark of the term.

The margin was further reduced when Kurt Holt took a strong outstretched mark in the forward 50 arc but his shot fell short of the line.

Brown towered over the pack to take the mark in front of goal to score the Cougars’ third for the quarter.

With the margin back to eight points, Brown combined with Jordan Stubbe in front of goal and the pair scored a goal each.

DeGroot and Williams accelerated from the corresponding centre bounce to steam forward and the latter’s captain’s goal kept the Cougars in the hunt.

However, as they had done from the midway mark of the second term, Heyfield responded as Jordan Stubbe and Nick Dinsdale snapped majors to extend the margin ahead of the final change.

The Kangaroos never surrendered the lead after seizing it and continued to clear away after three-quarter-time.

Bedggood added to his highlights reel with consecutive majors in less than two minutes to start the final term.

There was also a high-flying grab off defenders’ shoulders as he looked to take a one-handed mark.

The run of five straight majors to Heyfield was halted by goals to Leigh McDonald and Darby, who was moved forward from defence, before Joel Dinsdale’s third shut the gate on the contest.

Churchill kept coming, but were one man down 15 minutes into the term following an undisciplined act by Dillon Leys which left Heyfield tall Sean Humphrey’s reeling.

A late major to Brighton gave the fifth placed Cougars something to cheer about as they bowed out of the premiership race.

In the reserves, third-placed Churchill recorded a comfortable 28-point victory over Sale City to advance to the grand final to face Heyfield, contesting a fifth-straight title.

The Magpies exploded out of the blocks in the premiership term to shake the Wildcats, booting three majors to one to establish a 32 point buffer. Glengarry will meet TTU in the big one, with the Bombers eager to make amends for last year’s loss.

ROSEDALE will meet Churchill in the North Gippsland A grade netball grand final after toppling Woodside by five goals in the preliminary final.

The Blues put together a strong four quarter effort to down the Wildcats 46-41.

It was a tough day out for Traralgon Tyers United in the other grades, losing three preliminaries.

The B grade Bombers lost to Heyfield by 10, while C grade and the 15 and under side were defeated by Woodside.