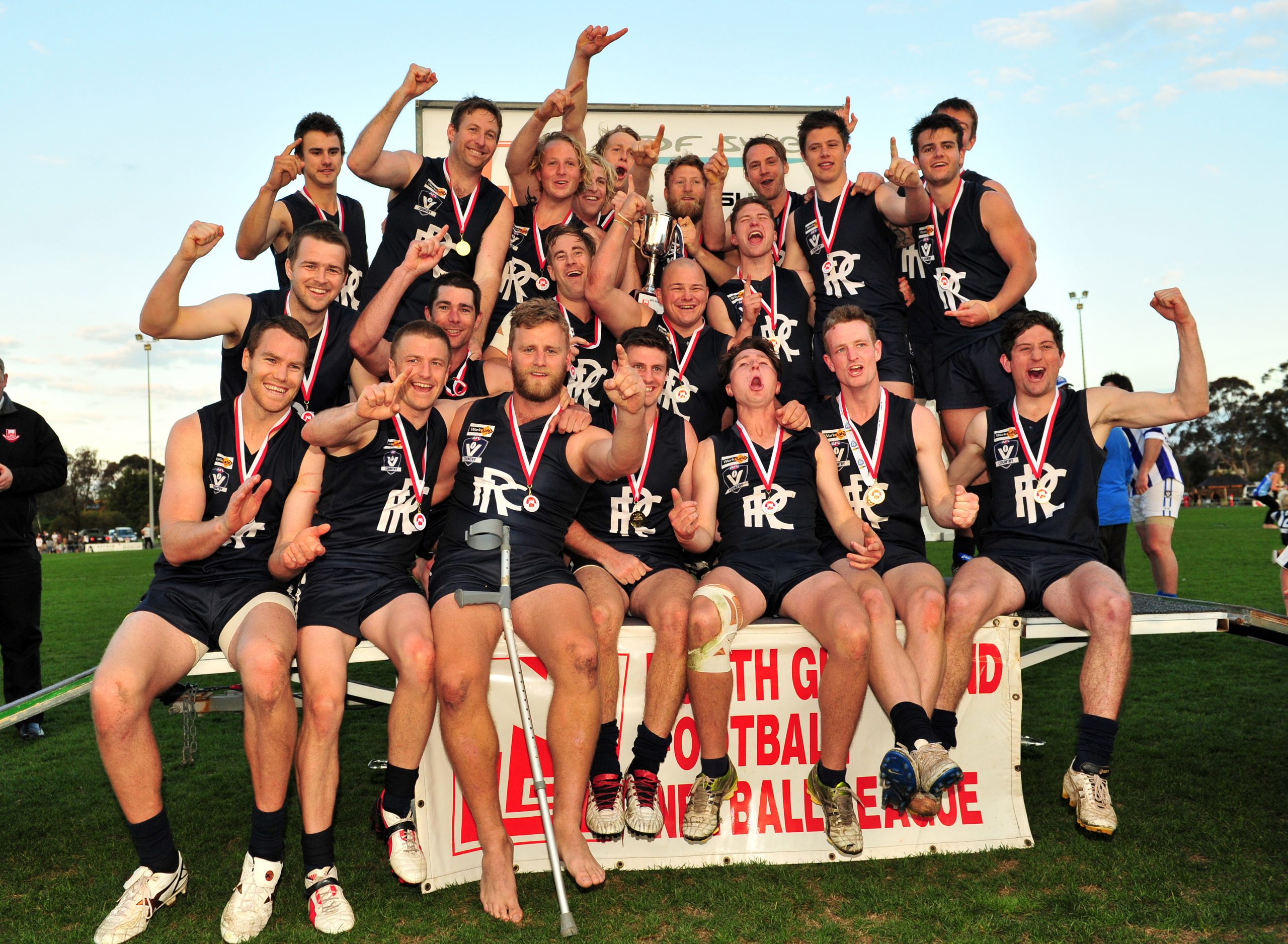 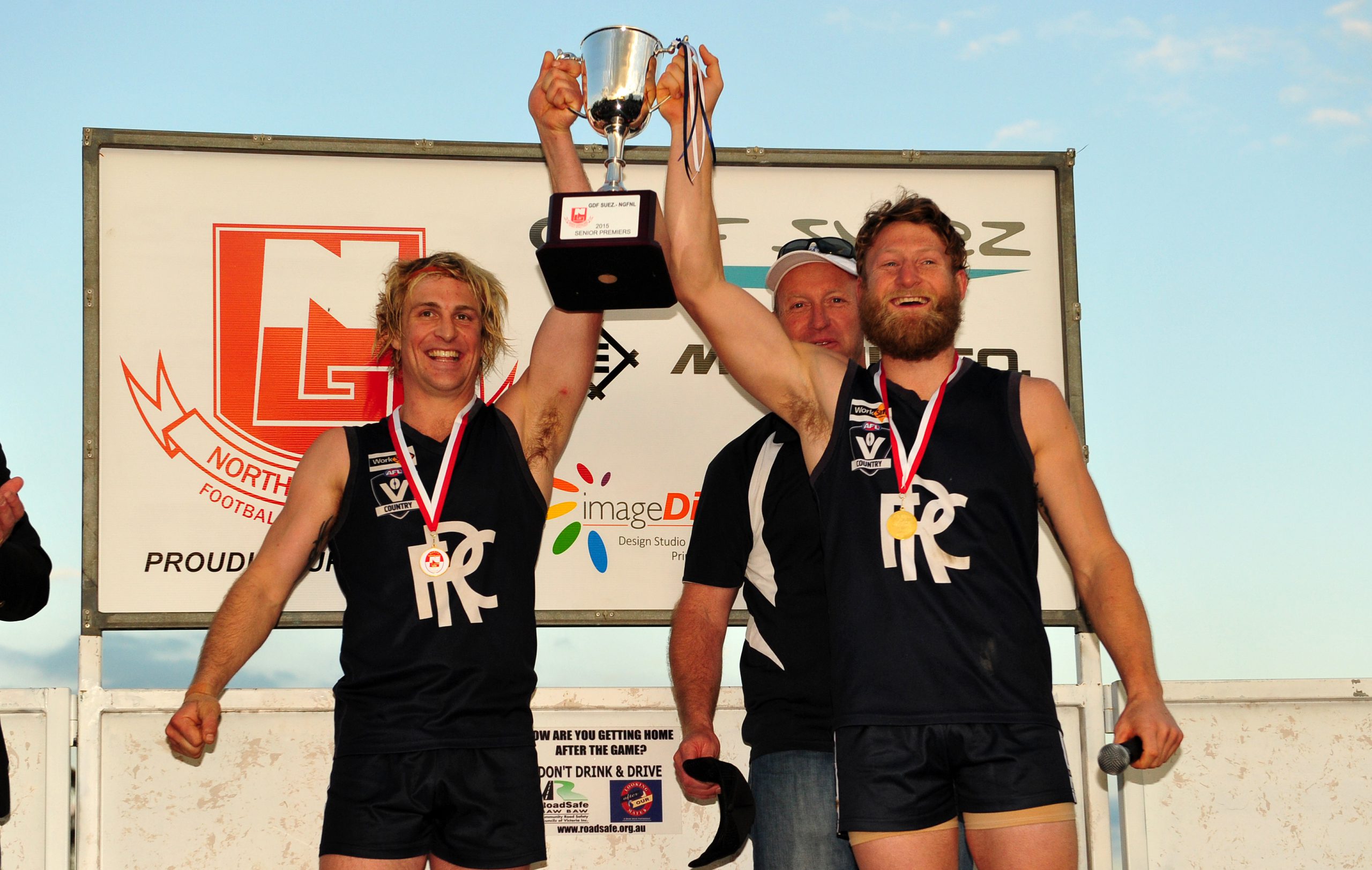 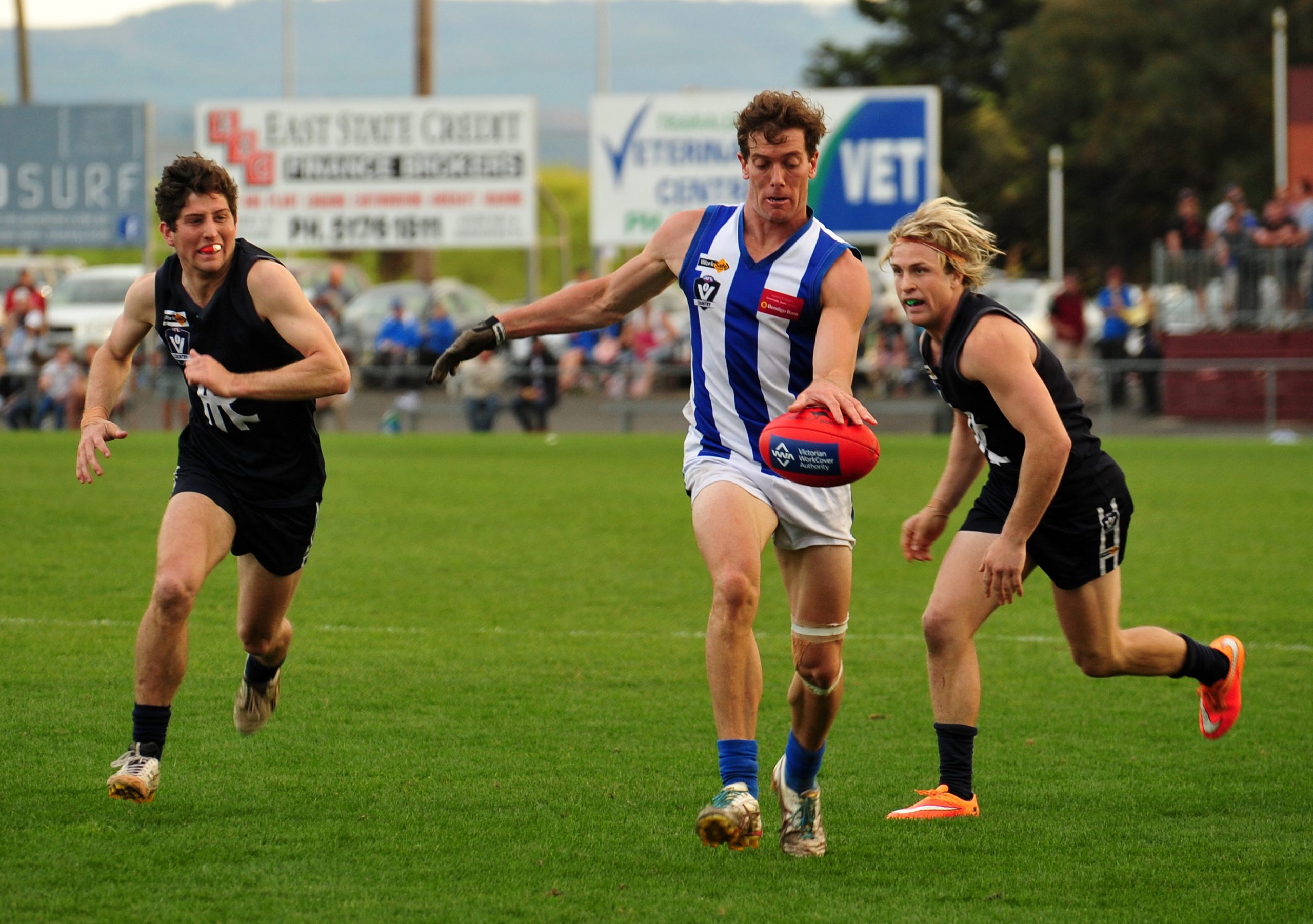 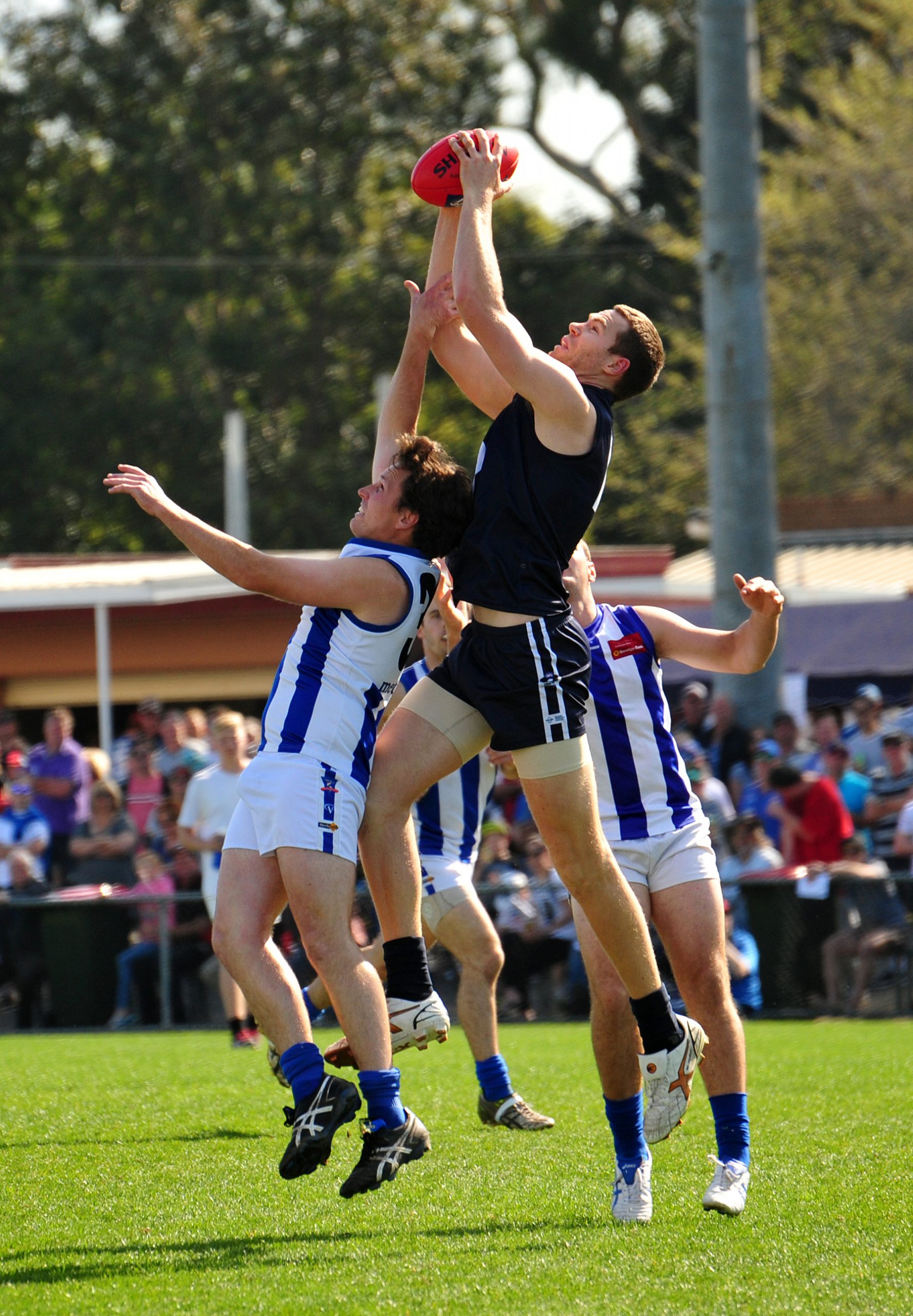 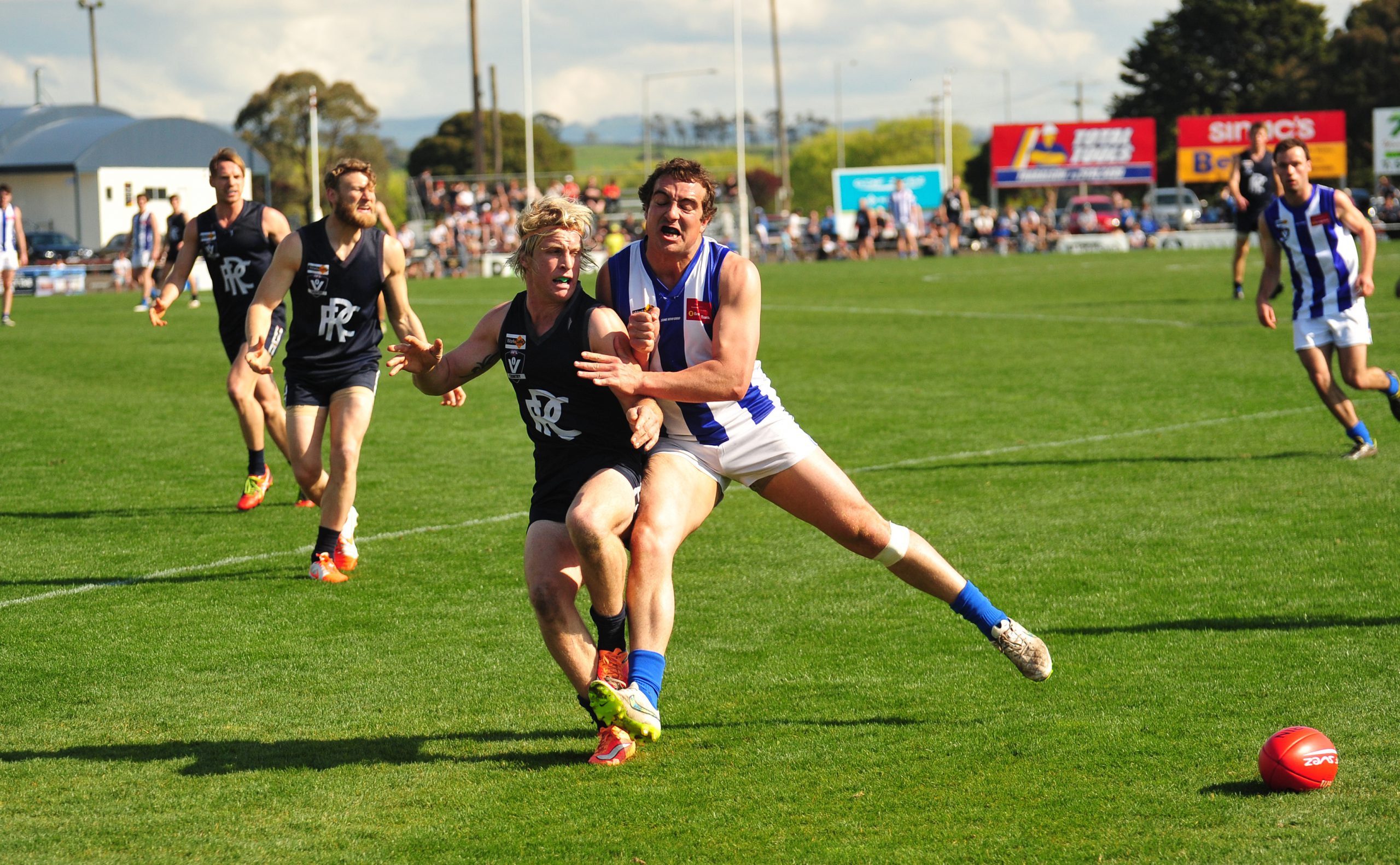 IT was all Rosedale in Saturday’s North Gippsland Football Netball League grand final against Heyfield in front of 4,314 spectators at Traralgon.

The Blues’ 34 scoring shots to 11 belied the 2015 premier’s dominance of the contest, so one-sided was the spectacle.

Rosedale had all but buried matters by half-time after restricting Heyfield to just one Leigh Brown major to lead 7.9 (51) to 1.3 (9).

With best on ground Brad Scott locking down the defensive arc there was no way through for the ‘Roos as the minor premier bombarded the sticks to win out 12.22 (94) to 5.6 (36).

His opposite number Ben Macreadie could scarcely have asked for more in his debut season as Rosedale senior coach.

“Absolutely, it doesn’t happen every day and for it to happen is pretty surreal at the moment,” Macreadie said.

“I wouldn’t say I’ve done a lot, they’re a bloody talented bunch of boys, so it’s been an easy run to coach these guys, they’ve just been amazing this year.

“I think I just brought maybe a bit of structure around the footy and just utilised our strengths which is our runners… we’re not an overly tall team but with the running group we’ve got we can really exploit sides and we’ve been able to do that this year.”

While Macreadie claims he didn’t relax until the final throes, the party had well and truly started for Rosedale a long way out from the siren.

“I was only really starting to celebrate when we kicked a couple in the last – I thought that was it then – but you’ve got to play it out to the end and we definitely did that,” he said.

The one blip on Rosedale’s radar came in the form of a heavy knock to Adam Diamond from Brown, which floored the midfielder forcing a 20 minute recess to the match.

Diamond returned to the bench in the second half to watch the remainder of the match, which would have done wonders for his recovery.

One man down the Blues didn’t seem phased, Bailey not only created headaches by opening space in the forward line but as a tall target as his teammates bombed the ball long and deep into the forward 50.

Scott Anderson’s chase and tackle on Bailey on the wing sent the Kangaroos forward for one of the first times in the stanza.

Joel Dinsdale looked to create something for the Roos but his kick into the high flying forward pack of James Beha and Brown went astray as the Blues back line, led by Scott and Rohan Diamond, ran the ball hard and fast from the defensive 50.

There were no such problems at the other end of the ground; James Hammill propped and stopped before his lethal left foot kick hunted out Bailey who worked clear of Anderson in the one on one contest.

Scott Johnstone was the beneficiary of Bailey’s wayward shot and soccered through the Blues’ second.

Dinsdale looked to get the reply for Heyfield but his shot missed to the near side ahead of the quarter-time siren leaving the score 2.14 (16) to 0.2 (2).

In a mirror to the opening minutes, Bailey slotted through his second major following a free kick from an errantly ferocious tackle.

Big target Brown, at times double marked, was the danger man for Heyfield and opened his side’s register with strength under the high ball from Josh Stubbe.

Injuring his ankle in the contest with Brown, Rosedale defender Luke Carpenter was yet another casualty as the Blues bench was whittled to two rotations.

Heyfield continued to show signs of unease, kicking into the man on the mark, straight to the opposition or running into trouble holding the ball all commonplace.

Rosedale’s inaccuracy in front of goal kept the door ajar for Heyfield to challenge when Fleming and Bailey failed to convert easy shots on goal.

The run of behinds was halted when Macreadie roved the contest with a one handed grab before running goal ward.

His long direct kick hit Frazar Brouns who goaled to extend the lead to 28 points.

Rolling the dice Birss shook things up, moving Sean Humphries and Daniel Stubbe into the middle of the ground as Heyfield looked to halt the dominance of Macreadie, Dale Fleming and Jake Mowat.

Macreadie created space in his forward line by moving his Bailey into the ruck which in turn brought Brown in to keep the big man in check.

Wayward shots at goal presented at either end of the ground; Andrew McQualter’s shot failed to make the distance while Beha had an opportunity for Heyfield’s from outside 45 metres but his shot moved across the face of goal.

The premiership term was a tighter affair on the scoreboard as Rosedale registered three majors to Heyfield’s two in an arm-wrestle 25 minutes of play.

Heyfield defender Daniel Stevens was ferocious in his attack on the ball and man as he tried to single handedly create a spark.

The defender worked hard along with Lambie, Anderson, Bailey Escreet and Jesse Jackway, but each time they ran the ball from defence the link broke across the middle of the ground with the Blues rebounding the ball back into their attacking 50.

However, Nic Dowse ran hard along the wing and set up Brown who scored his second from point blank range.

Rosedale’s first for the third term came 10 minutes in through Tatterson, which was followed by another to Macreadie who found himself left unmanned 30 metres out from goal.

It was three in a row when Luke Stuckey chimed in with his first as the Blues ran rampant.

Josh Stubbe’s handpass over to Brown in the goal square marked the Roos’ third but the margin was out to nine goals at the final change.

Jackway registered his first in the opening minutes of the final quarter then quickly added a second.

Quick majors to coach Macreadie and captain Fleming ended any lingering Heyfield hopes as the Blues peppered away at the posts to win comfortably.