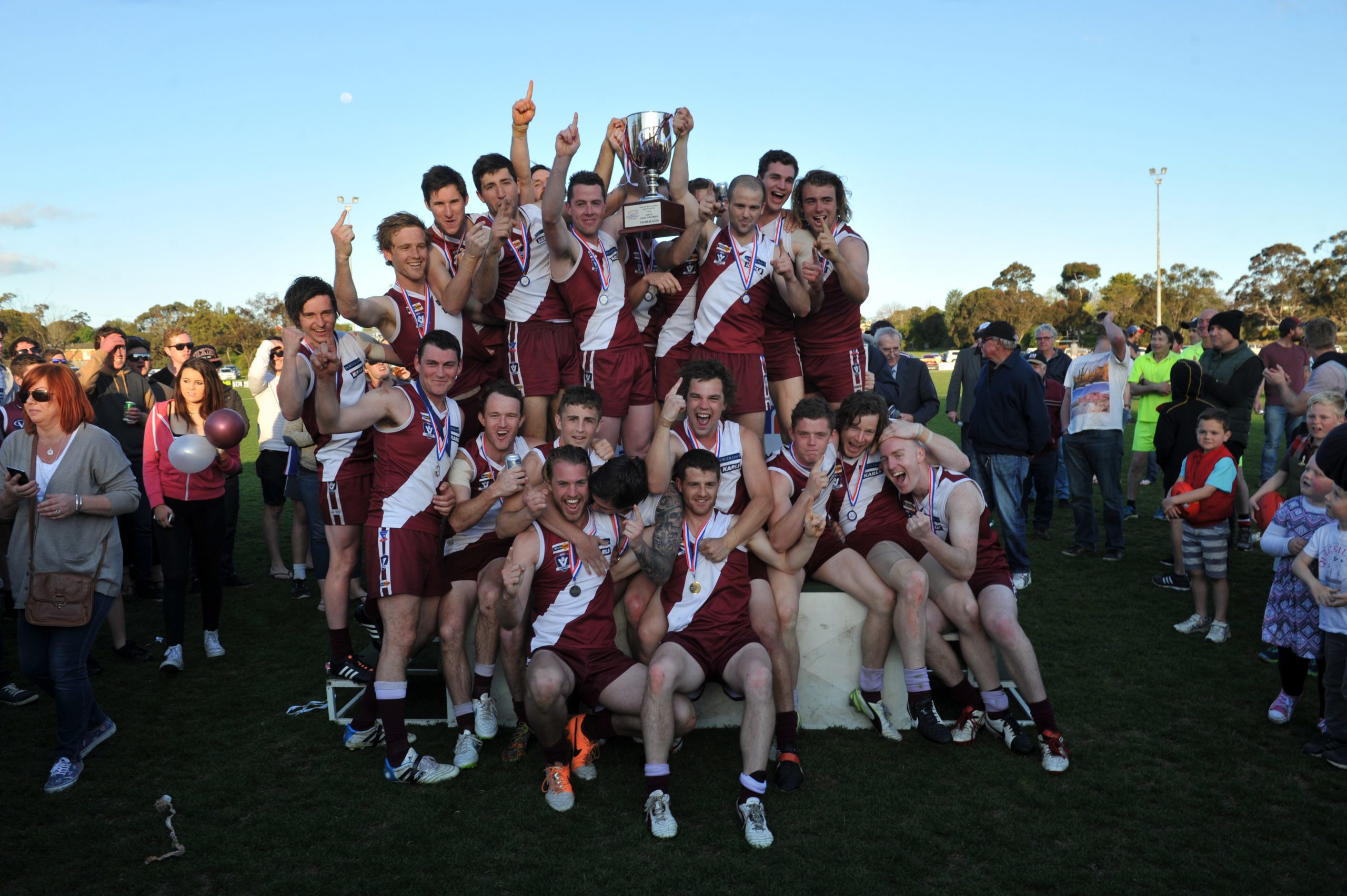 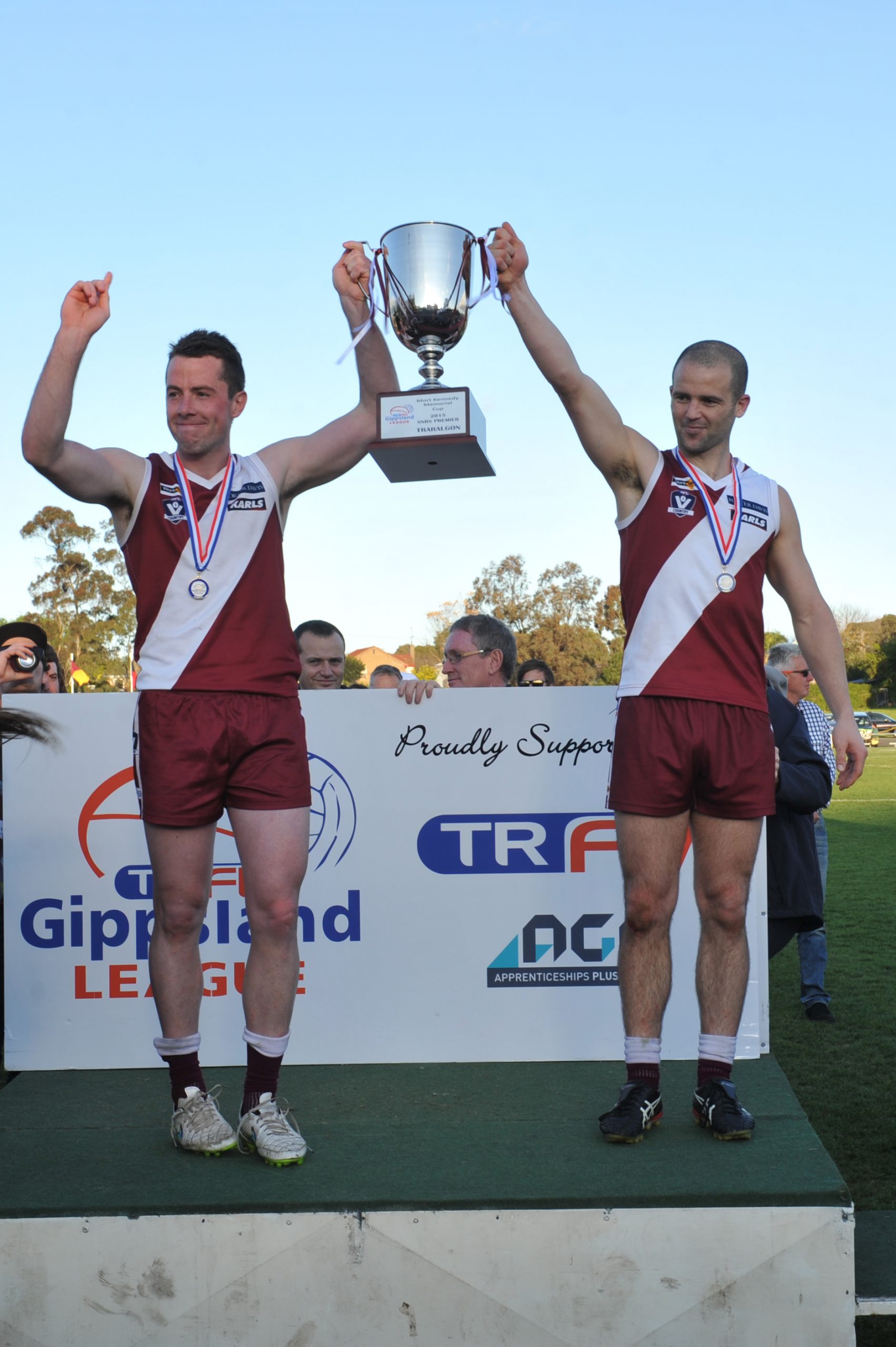 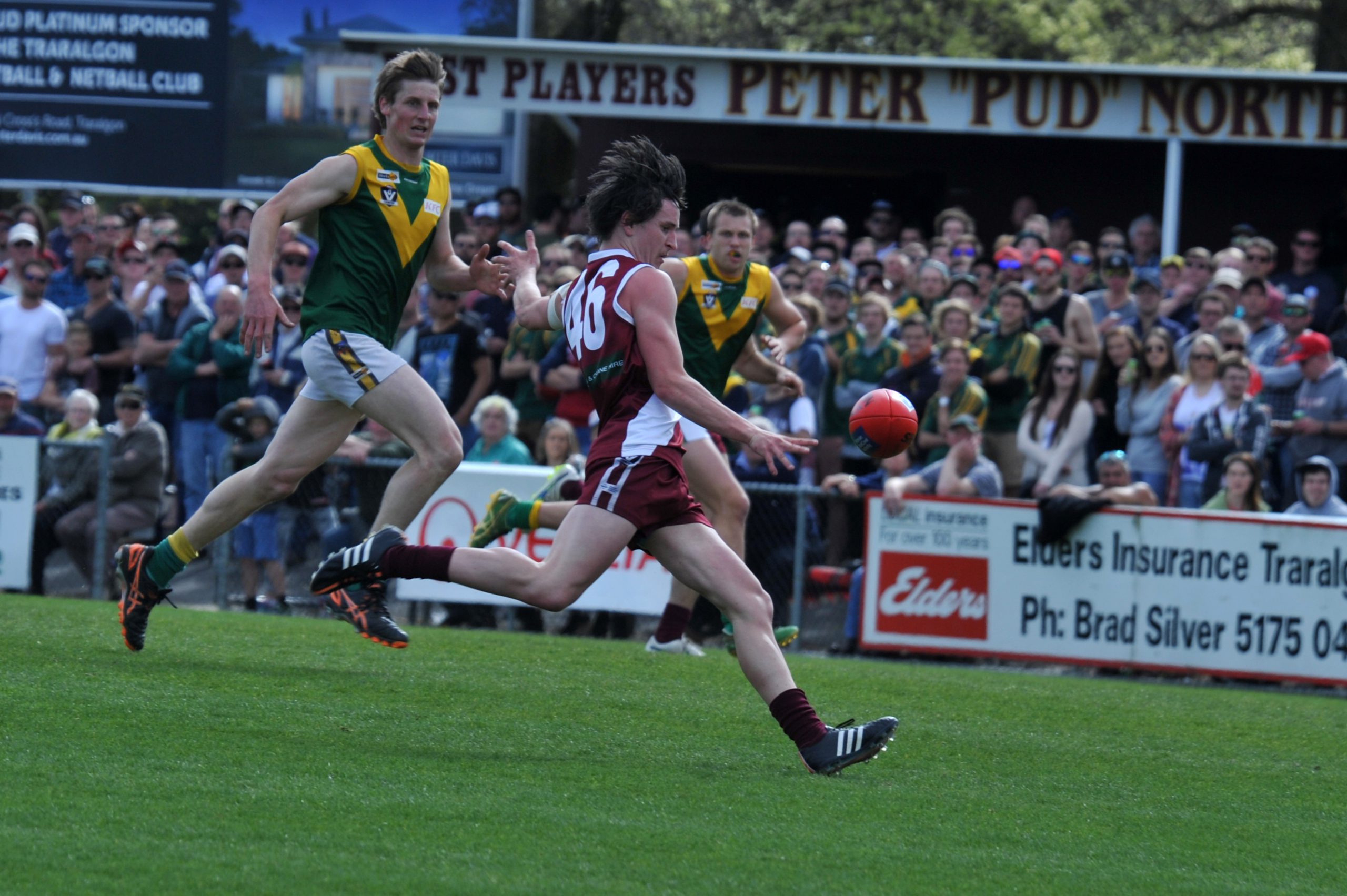 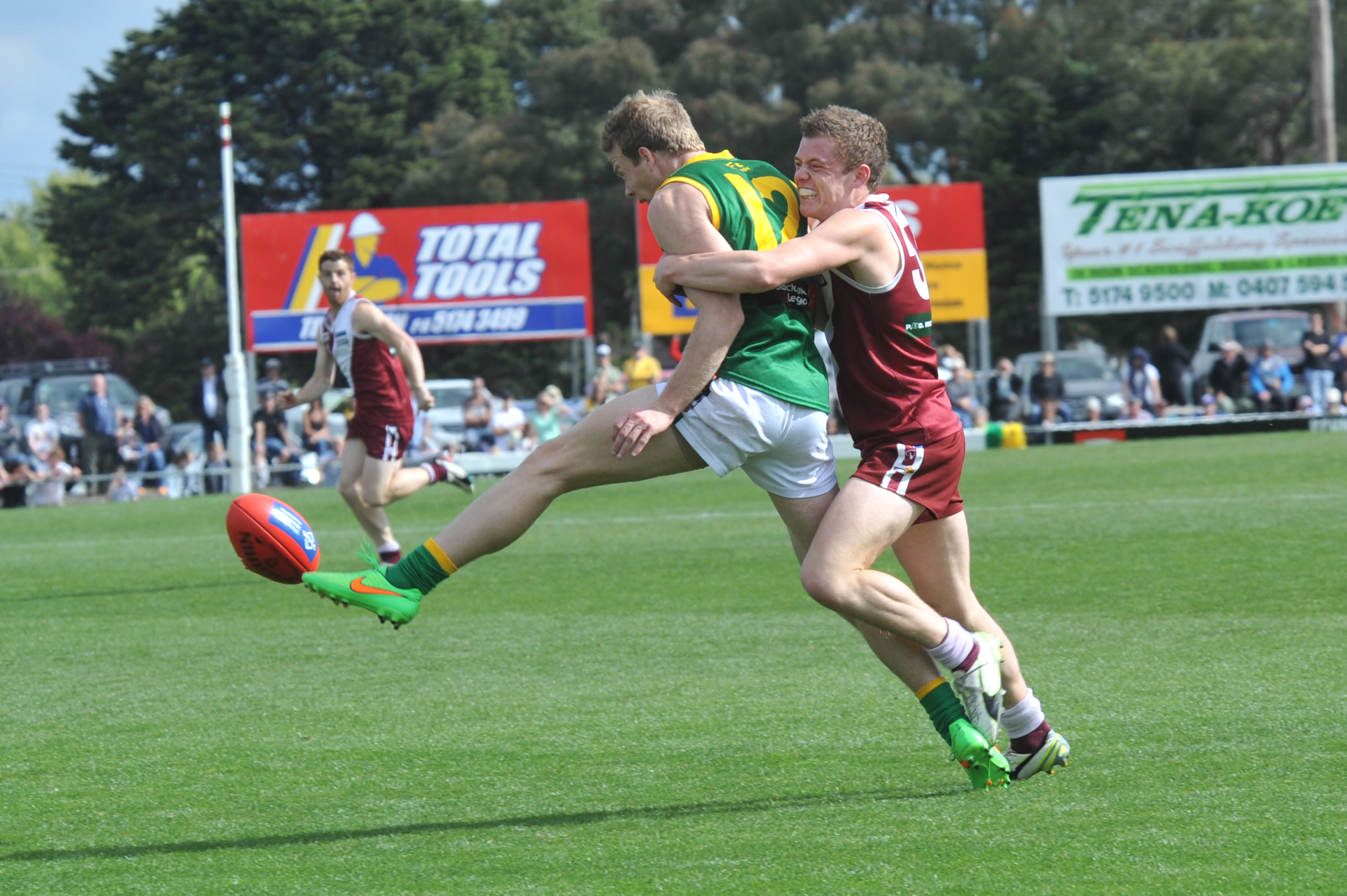 FROM his first day on the job as Traralgon senior coach Mark Collison was adamant he had inherited a flag-winning side.

On Saturday he was proven right when the Maroons knocked off minor premier Leongatha 12.11 (83) to 7.11 (53) in the Gippsland League grand final in front of a record 5510-strong crowd at Traralgon Recreation Reserve.

The Parrots never recovered from a first quarter Traralgon blitz, which saw the home side kick the first five goals straight, ending the fairytale for first year coach Beau Vernon.

Saturday’s final capped off a monumental revival for the Maroons, overturning a 123-point thrashing at the hands of Leongatha in round one to show them up on the grand stage.

Collison, who was perhaps lucky to play after escaping the tribunal with a severe reprimand for striking during the week, said despite the first round horrors he always believed it was possible.

“I backed our boys in from day one, I never thought we were in doubt so we were really confident,” Collison said.

“I was pretty confident, confident in the boys, it’s one of those things where you never doubt them. We’ve got a great footy club at the moment.

“The boys were unreal (on Satuday), they just fought it out, really proud of the whole group. Our reserves had a really good year as well and obviously we got the thirds and fourths premiership plus the (A grade) netball so it’s been a really good day.”

Traralgon’s last coach to lift the trophy in 2011, Josh Jennings, was another influential figure in the victory and took out the Stan Aitken medal presented by former club captain, now Yinnar premiership player, Jaime Aitken.

Jennings said he had found a new lease on his football life under Collison’s leadership and it showed all season as he turned back the clock to play some of his best football.

“This one I might enjoy a little more (than 2011) because I haven’t had any responsibility on me. Collo has just let me do my own thing… he’s done all the work and deserves all the accolades,” Jennings said.

“It has been a rebuild (since 2011) but it’s been enjoyable. We’ve got a good mix of older people, younger people and we’ve got some under 17s and 18s coming through that are really exciting.”

Traralgon established its dominance from the get-go, as Gippsland Power tall Christian Buykx-Smith swooped on the loose ball to boot the first goal from the 50-metre line inside the first minute.

Running towards the scoreboard end Traralgon relentlessly attacked the right pocket, with one of several early thrusts down the flank ending in a centring kick to Michael Burge who slotted home from 20 metres.

Errant kicking and uncertainty out of the Leongatha defence kept Traralgon on the front foot and Hayden Britten made the Parrots pay, making it three straight when he picked up the pieces from a dropped mark to score on an acute angle.

Leongatha made it first forward entry only for Cade Maskell to snap straight to the chest of Mick Stockdale, who was getting plenty of it early.

Rebounding forward Britten swooped in, again marking on the right side of centre half-forward and he made it four unanswered with another laser like set shot.

Not content with his first term double, Britten booted his third on the trot after three Parrots flew in a contest with Burge, only for the wily forward to crumb off the pack and set his in-form teammate up for a one-handed grab and goal.

Just 15 minutes in and the scoreboard read 5.0 (30) to nil in an ominous opening, as Leongatha was continually caught out over handballing out of defence and through midfield while Traralgon was relentless in its chase and tackle.

Danny Campbell and Buykx-Smith kicked the first two behinds of the game, before Brent Fitzgerald finally put his side on the board with a neat snap close to quarter-time.

Jason Tomada had a chance to peel another back after being gifted a 50 metre penalty, but his low trajectory shot was touched over the line to make it 1.1 (7) to 5.2 (32) at quarter-time.

A string of Traralgon behinds opened the second term, while Leongatha was still wasteful with its disposal, before Tas Clingan inspired the Parrots with an intercept and his side’s second goal.

Dylan Loprese replied for Traralgon with a sneaky close range goal 12 minutes into the term to restore the advantage.

While AFL Vic Country medallist Ben Amberg was dominating the ruck, Leongatha lifted its work rate around the stoppages and began to combat the big man’s influence, helping set up a chance for Aaron Heppell which faded off target.

When Maskell took a screamer over three players it looked to ignite his troops, but an off target shot from 30 metres kept the Parrots frustrated.

Their problems were further exacerbated minutes later when Nick Nagel took a strong grab, only to injure his leg in the contest and took no further part.

Heppell converted the set shot in his absence, but Leongatha continued to cough up possession going short to the contests out of defence, allowing Traralgon to add another series of behinds.

Again Leongatha kept itself alive with the last goal of the term, this time to Ash Lynch who came flying through the pack to kick a running goal just ahead of half-time to make it 4.6 (30) to 6.7 (43).

Jake Best and Aaron Hillberg had first look at the sticks in the third, but both misfired with Leongatha’s seventh and eighth minor scores respectively.

Slick ball movement at the other end saw Collison connect with Tim Northe, who quickly dished to Britten who ran 25 metres to slam home his fourth.

Maskell excited the crowd with a huge leap on the back of two Traralgon defenders but came down from his extended hang-time with nothing but air, while Best crumbed the pack for a behind.

Neither side found its radar in the term, but Traralgon’s firm defence remained in tact, with Adam Jaensch epitomising the side’s resilience down back with a superb scrambling save to deny a dangerous attack with the Maroons spread thin.

With the inside footy and contested issues favouring Traralgon, coach Collison roved the pack and kicked a running snap from 40 metres, again benefitting from the work of Jennings and Amberg to make it 8.7 (55) to 5.9 (39) 21 minutes into the term.

Maskell again flew for the specky but this time managed the grab and nailed an important goal to keep his side alive.

Having announced his retirement at the start of the finals series, Mick Geary kicked a captain’s goal from 45 metres to put his side back in the box seat at three-quarter-time with a 17-point lead.

Jennings and Hillberg traded majors to start the last before Geary stood up in his swansong to boot a pair of swivelling snaps and put the result beyond doubt.

The senior victory capped off a massive day for the club, winning four of the six finals it contested.

Traralgon also became just the third side to win three out of four football finals on the one day after Maffra (2004 – firsts, seconds, thirds) and Traralgon (2008 – seconds, thirds, fourths).