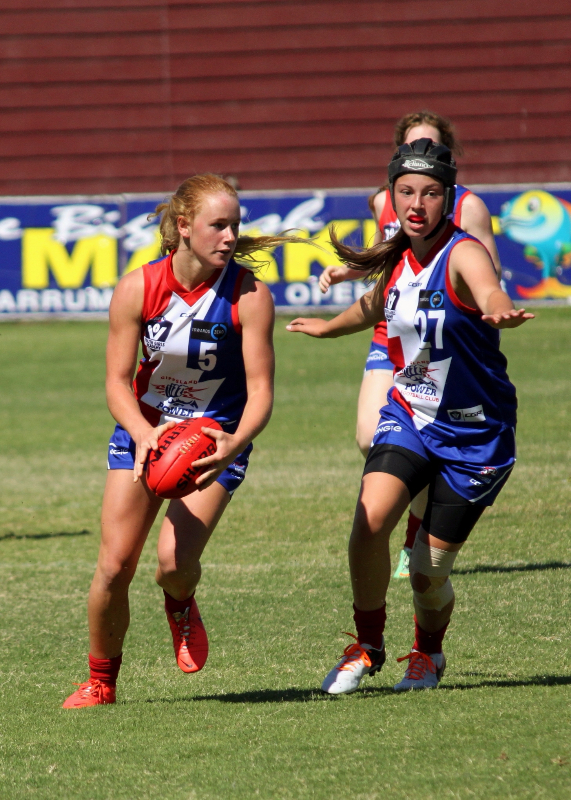 GIRL power was in full force for round one of the AFL Victoria Youth Girls Academy Challenge at the weekend.

Gippsland Power scored an impressive debut victory over Geelong/Western 5.6 (36) to 3.6 (24) to kick off the campaign in style at Frankston.

The youth girls outfit, this year fully integrated with the Power’s TAC Cup program, recovered from a scoreless first quarter and showed the benefits of its extensive fitness training program to storm home in the second half.

Power talent manager Peter Francis said it was an encouraging first up display for the newly formed Youth Girls Academy, which was without about half a dozen key players due to injury.

“To beat Geelong/Western, which is a really big region, is a credit to our girls,” Francis said,

“They’re only going to get better too; it’s only three weeks back into training.

“They played very much like the TAC Cup team, a very similar sort of style and we were really pleased with them.”

Captain Darcy Guttridge was a standout at centre half-back while Emma Volard received the best on ground votes for her diligent efforts across the half back flank.

Francis said the side’s superior fitness, fostered through six weeks of pre-Christmas training and another three prior to round one, was telling.

“Chelsea Caple as strength and conditioning coach has done a fantastic job and obviously Scotty McDougal as (head) coach has been really good with the girls,” Francis said.

Placed in arguably the toughest section of the draw, which includes Sandringham and Dandenong, Power will return to the park this weekend to take on the Dragons.

“It’s a really good challenge for our girls and they’re really up to it, they were really confident heading into this game and they’ll be confident (again),” Francis said.

The game will begin at 11.45am at Frankston on Saturday.