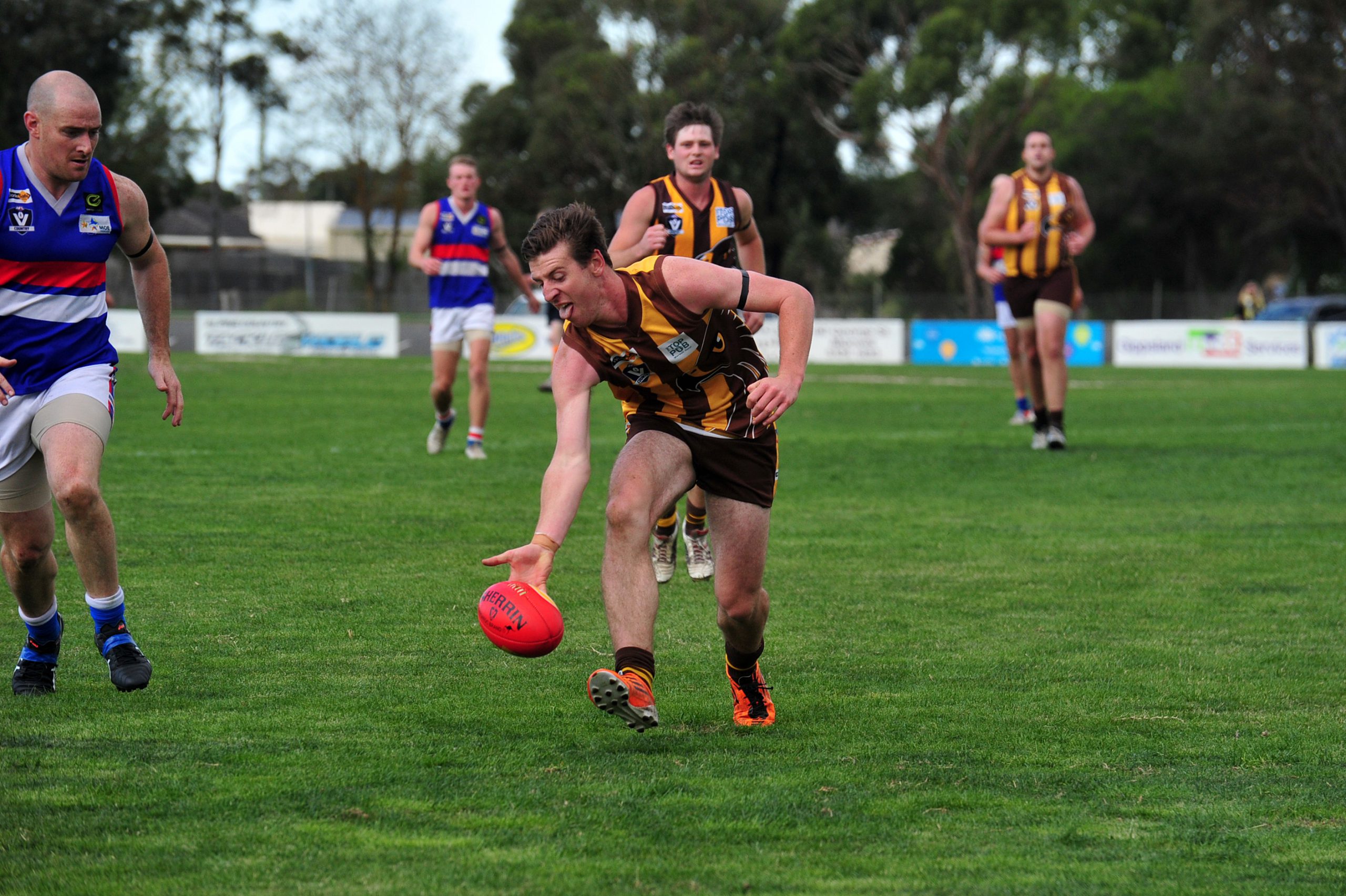 MORWELL East has become a dominant factor in the Mid Gippsland Football League after posting a huge round four win over Hill End at Ronald Reserve.

The East, astutely coached by Colin King, has won three of four matches so far against average teams and has been building for an assault on the heavyweights.

Opening up with a seven goal first term the Hawks put on the power while Hill End struggled under weight of numbers.

With 34 points the difference by the first break the only question, was ‘the Hawks by how much?’

Another blistering quarter followed in which the Hawks added a further six unanswered goals.

Morwell East thrived in the ruck with the huge Andrew Brown taking control, aided by the swift work of small forward Lachlan White who bagged seven goals for the day.

Hill End had triers in Mugsy Mooka and Jack Hudson but too many seemed to be overawed by the occasion.

Hill End bravely fought back in the second half and made a game of it, scoring seven goals to the East’s 10, and was competitive after a poor first half.

It was Morwell East’s second highest total against Hill End, one point shy of its best set in 2006.

White’s seven goals came in his best game for the Hawks while Paul Henry contributed another as the East shared the goals among 11 players.

NEWBOROUGH caught Yallourn-Yallourn North napping and sent the Bombers from second to fourth after a 28-point win.

It was revenge time for the Bulldogs after last year’s defeats at the Bombers’ hands.

YYN had to make five changes to the previous week’s team, while Newborough brought back Liam Carolan.

Newborough had plenty of energy and outsmarted YYN in the opening term; it had five goals on the board before the Bombers raised the twin flags.

Newborough’s Anthony Rosato was again the pick of the crop and has developed into a top line player. YYN was sluggish as Newborough put on the pressure and made the usually active Bombers earn every kick.

There was little between the two teams by three-quarter time but the final quarter was the difference with YYN failing to capitalise on forward play to register just 3.8 (26) to the more accurate Newborough, which finished off the term with 5.3 (33) to run out winners by 18 points.

MIRBOO North trounced Trafalgar by 127 points, but was not on song from the outset.

A lack of thrust was an early theme as the wayward Tigers missed golden opportunities to blow Trafalgar away.

Reliability on the forward line was missing and the Tigers could only find three goals from 14 shots for a 3.9 (27) first quarter result.

The Tigers made six changes with coach Clancy Bennett and ruckman Isaac Abbas out.

Kris Berchtold was a late inclusion and was a danger man for the Tigers.

He has been playing for the Tigers for more than a decade with many goals to boot, and his seven against Trafalgar could be rated as some of his best.

After their early lapse around the goals, the Tigers realigned and found their target over the next three terms with a blistering 10-goal last quarter to run out winners 26.19 (175) to Trafalgar’s 7.6 (48).

Zac Kilgower also booted five to be among the 10 Tigers players who scored.

YINNAR notched its 99th win over Thorpdale in the 82nd year of competition between the two teams.

The Magpies, sitting on top of the table, were far too good for Thorpdale which was kept to one goal by half-time.

Yinnar kicked off smartly and by the first break had established a big lead of 37 points.

Three more goals in the second saw Yinnar with nine goals on the board before Thorpdale eventually got one through; it was hard work for the Blues as Yinnar’s defensive line held strong. The last term became a kick to kick game with very little going through the sticks compared with the previous three.

Kane Grinstead-Jones bagged four for Yinnar and was among the best, while Damien Yates and Luke Linton also showed good form in the 17.7 (103) to 3.8 (26) win.

YARRAGON jumped to sixth on the table with a big win over Boolarra but early inaccuracy by the Panthers could have been messy.

Boolarra opened well and had more on the board courtesy of accuracy.

Yarragon came back firing blanks in the second term, amassing a poor 4.7 (31) for its efforts, but had a good lead of 15 by half-time.

After half-time Boolarra couldn’t buy a goal as Yarragon went mean in defence; the Dees scratched around and produced a late goal deep into the final quarter but by then Yarragon had advanced to a winning score of 10.13 (73) to Boolarra’s 5.3 (33).