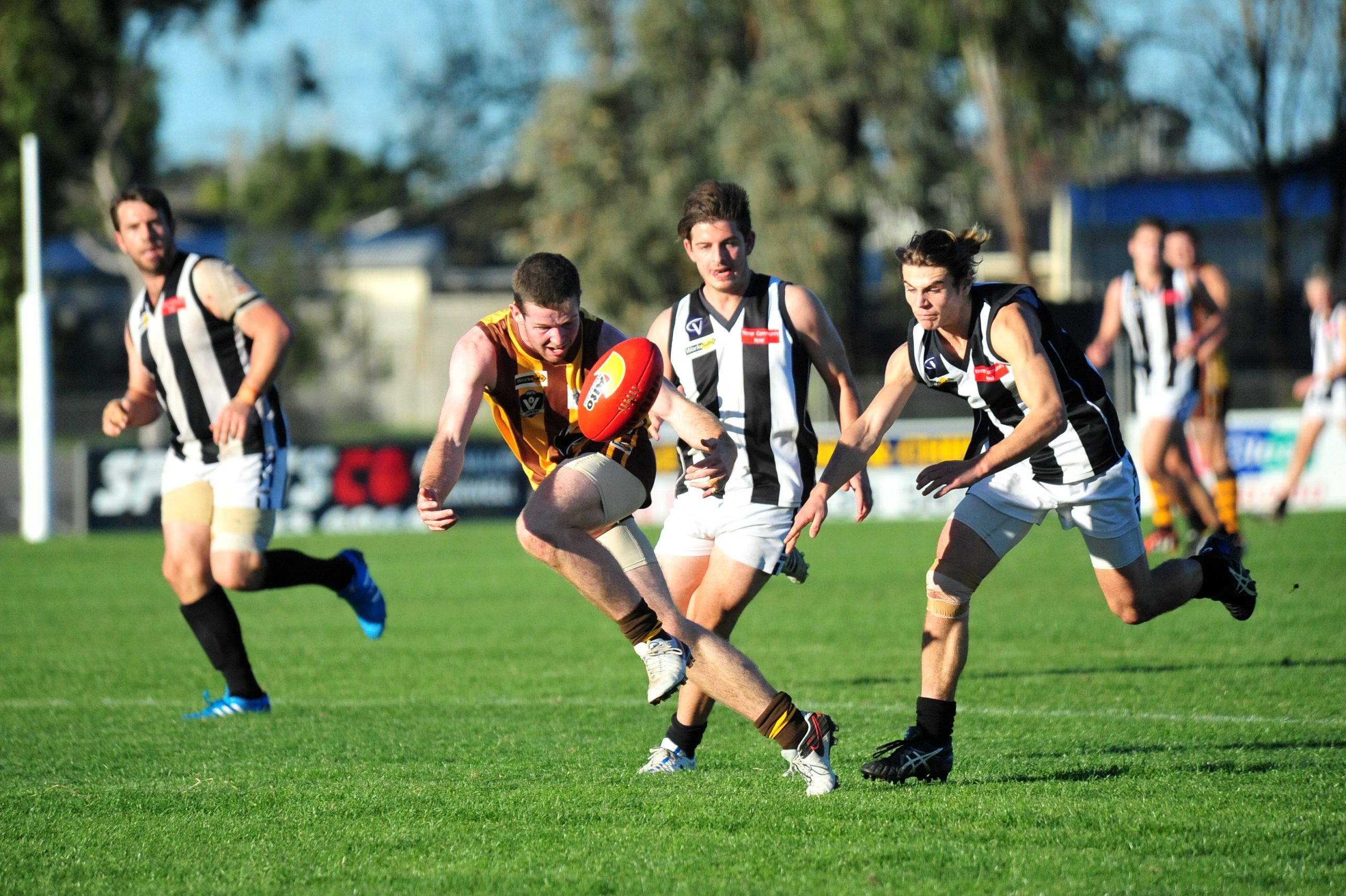 Morwell East prevailed in the battle of the birds to record a one-point victory against Yinnar in round six of Mid Gippsland football.

This was the Hawks’ first win over the Magpies since 6 August, 2011.

It was Ben Marks who was the hero in Morwell East’s comeback win, however the Hawks almost kicked the game away with a record low of 1.13 at half-time.

The cool crosswind made conditions difficult as Morwell East could not buy a goal and it took 37 minutes to score its first major, but in the meantime they had only 10 behinds on the board.

It was a battle against tight opposition as Yinnar was still in full flight, but the East were gaining confidence.

Even at three-quarter-time no one would have suggested the East had any chance of winning as they trailed by 22 points with only three goals on the board.

Using what little breeze was left, the Hawks began to claw their way back into the contest.

When Marks goaled for the Hawks to take the lead there was elation in the camp.

Fans had not expected a nail-biting finish after last week’s draw with Trafalgar, but this time they were rewarded with a win.

“I was really proud of the way the boys played,” Morwell East coach Colin King said.

“To come from 1.13 down to win was a magnificent achievement.

“They worked hard and got rewarded for their efforts; it wasn’t pretty football but we slogged it out to the finish.”

The East have now settled into third position, booting Yinnar down to fifth after two consecutive losses.

In the first leg of the Bright/St Ellen Trophy it was Mirboo North who took the game over Thorpdale by 30 points.

It was a competitive match with the Blues using the first quarter breeze more efficiently, leading at the first break by eight points.

However Mirboo North quickly gained the lead with two quick goals in the second term.

Tigers coach Clancy Bennett led by example, but was tentative after coming back from a hamstring injury.

However, with a more direct avenue to goal the game looked easy for the Tigers.

There was never any glamour in the game as the crosswind made it difficult to judge the flight of the ball, but Mirboo North adapted better to run out comfortable winners by 20 points.

A NINE-goal haul by Dean McDonald was enough to snuff out any pretext that Boolarra had of beating Yallourn-Yallourn North.

Tagged by three different players during the match, the energetic McDonald beat each to record his second nine-goal game for the season.

Not only was McDonald active but Tim Phillips also got into the action with a seven-goal haul to boost his already impressive figures.

For Boolarra there was not much up forward as it struggled to get into its forward 50 zone.

It was another all-round performance by the Bombers who crept back into the four.

It was Yarragon’s turn to retrieve the much sought after Waterloo Trophy from rivals and neighbours Trafalgar.

Yarragon is showing it is prepared to work hard to achieve end results.

The lack of a ‘home’ ground is a problem for the Panthers, but they are working well with the co-operation of the other clubs.

There was not going to be a fairytale finish for Hill End as it attempted to retrieve the Byrne/Fanning Trophy from Newborough.

It was mostly one-way traffic as Newborough made its intentions known early.

Using the strong wind to their advantage, the Bulldogs ran riot with an eight-goal-to-nil third term.

Hill End could hardly get the ball past the centre as Newborough across half-back were too strong.

Hill End struggled to score a major after half-time while Newborough added 12 to its impressive first half tally, finishing with 21.8 (134) to Hill End 4.2 (26).