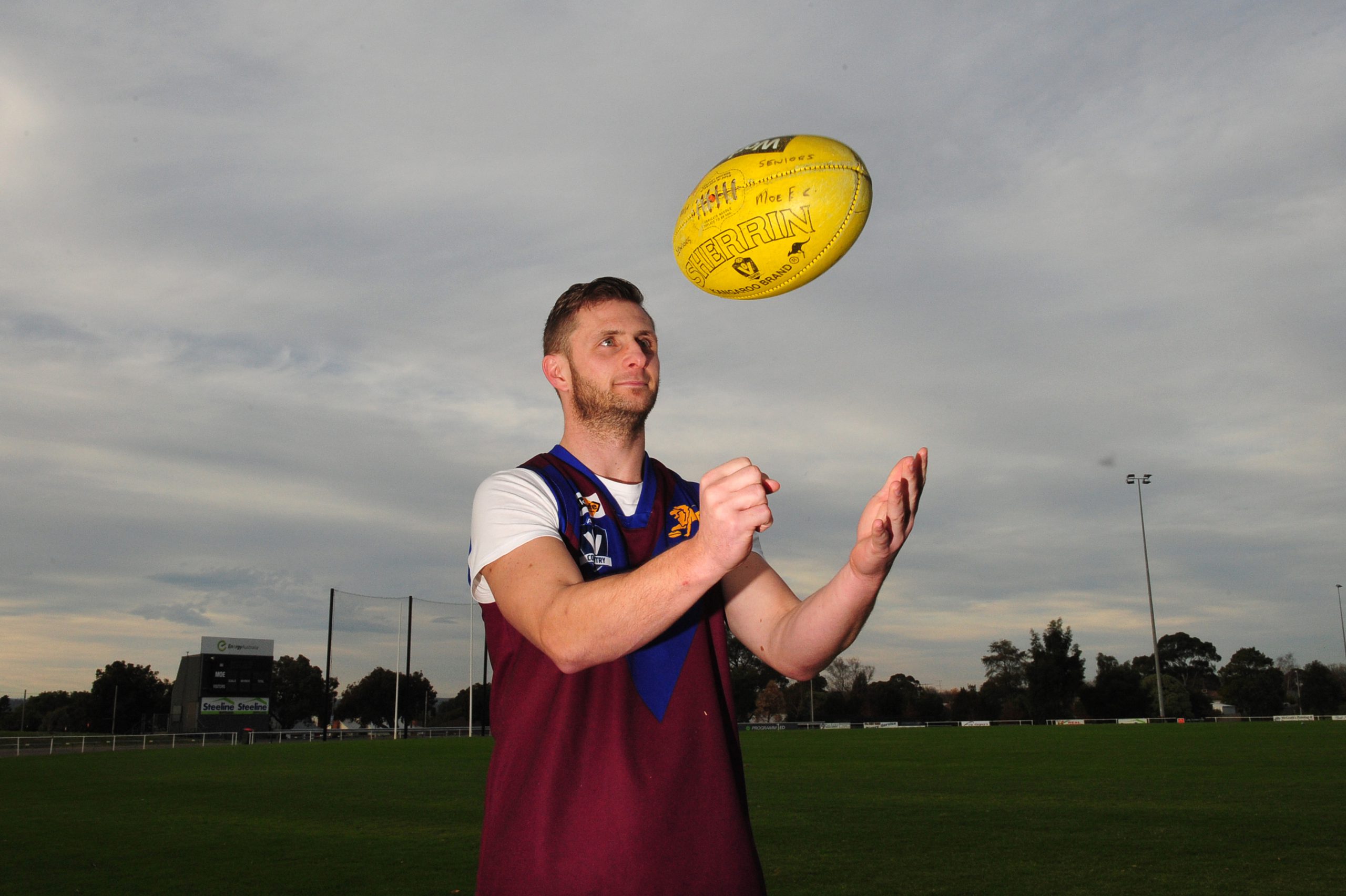 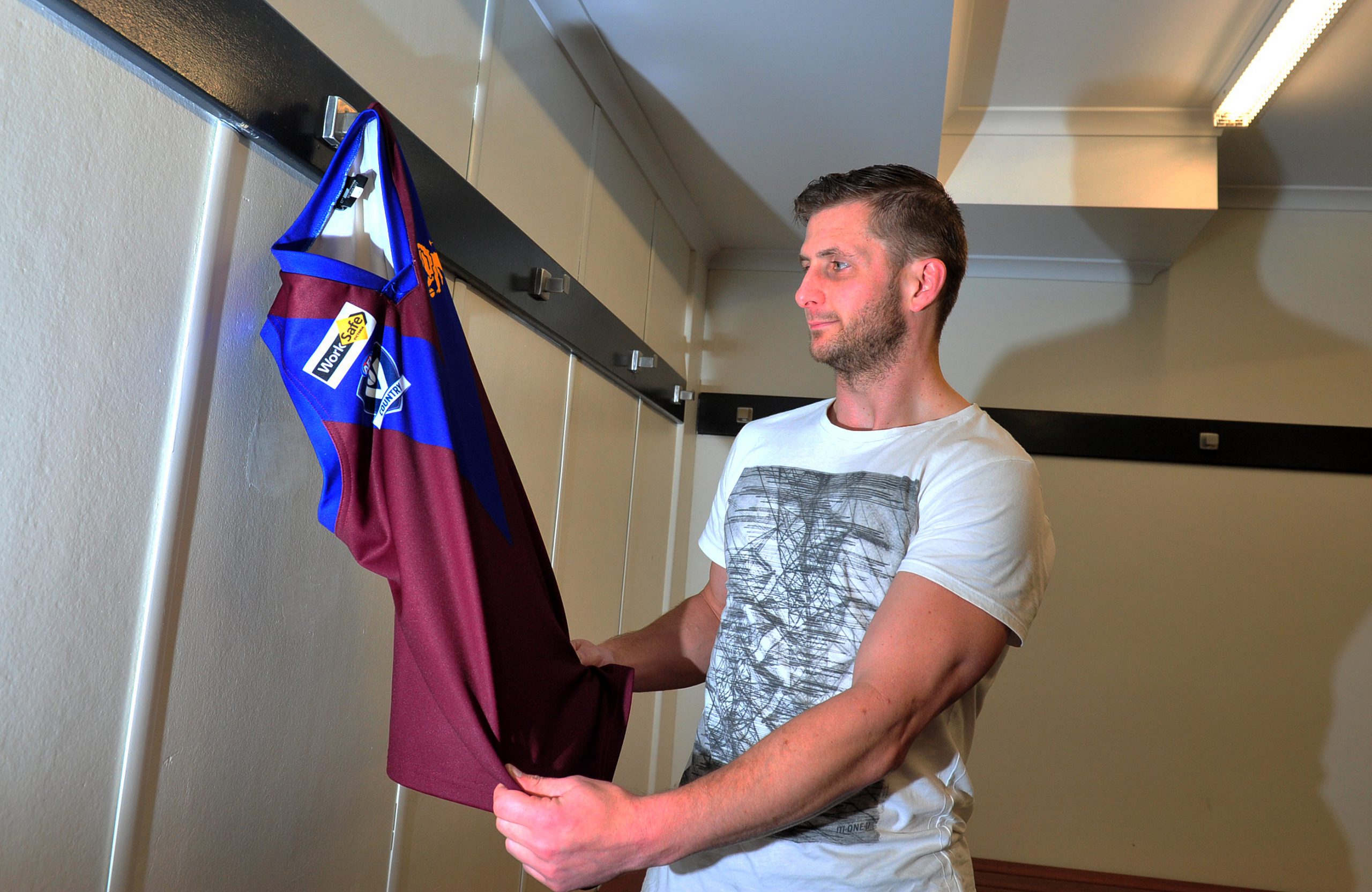 MOE stalwart Peter Ainsworth will create club history this weekend when he dons the Lions jersey for the 300th time in the Gippsland League senior grade against Leongatha.

The 36 year-old will become the first Moe footballer to achieve the senior triple century milestone, following on from his 300th club appearance last season.

Apart from one season at Yallourn in bottom age fourths Ainsworth is a one-club player and takes fierce pride in his Lions.

“I’m pretty honoured to be the first Moe bloke to achieve it, because I know there’s not many in the league who have done it. It’s good to have a 300 club player from Moe join blokes from other teams (in league history),” Ainsworth said.

“I just like the culture of the club, the people involved. I’ve made friends for life… I have thought about going elsewhere but I’ve decided to stay – I wanted to be a one-club player.”

Now a decorated player at the club, with a record five senior best and fairest gongs to his name, Ainsworth showed promise right from the start as a nine year-old junior with Moe City in 1988.

He won club best and fairest awards in the under 11s (twice) and the under 13s and went on to play fourths at Moe after his brief stint at Yallourn.

After two winless seasons the Lions had recruited stars such as then playing-coach Lachlan Sim, Troy Makepeace and Dean Caldow, who Ainsworth fondly remembers lining up alongside on debut.

“You’d play 16s or thirds then you’d watch them in the seniors; it was pretty surreal to play with them as an 18 year-old in your first game when you’re nervous as,” he said.

“Lachlan was my first senior coach and he was playing as well; he had a big influence on the way I played footy and how to go about it.”

It was an auspicious first outing – Ainsworth booted three goals in the span of about five minutes – and the newcomer received warm praise from his contemporaries post match.

“I just remember stepping up from thirds how different it was. You’re playing against men and I was only a skinny bloke but after the game the boys all said congratulations on your first game, so it was good,” he said.

Career highlights came early for the fledgling forward when he played in the 1999 and 2000 senior grand finals against Traralgon.

While they lost on both occasions, it was a thrill to stand up on the main stage, particularly on home soil.

“That was exciting as a 19/20 year-old, and the second one we played at Moe, which was a highlight in my career,” he said.

It was around the same time a young Ainsworth earned his now iconic nickname, ‘Jibba’.

He was at the pub one night when his mate’s shout came about.

Seated at a barstool, ‘Dougo’s’ wallet had fallen out of his pocket; when Ainsworth handed it back he was labelled a ‘jibbering thief’ and the title stuck.

Back on the footy field Ainsworth was kicking goals in the forward line, but was shifted to the back flank under Jason Shields in a career-defining move.

He made his name over a dozen seasons as a defender and rose to prominence as an interleague representative, seven-time GL team of the year member and captain of Moe’s 2003-14 team of the decade.

His longevity is such that he has served under nine Moe senior coaches in Sim, Shields, Ricky Dyt, Brett Szabo, Caldow, Makepeace, Jason MacFarlane, Adrian Burgiel and now James Blaser, who he rates highly among that cohort.

After a few tough seasons Ainsworth said the tide was turning under the current leader of the pride.

“James has been awesome, he’s just a natural when it comes to playing footy and coaching as well,” he said.

“The feeling is a lot better than it has been in previous years, probably more professional this year.

“Blokes are more dedicated and (there’s) probably a bit more talent in our team than the last few years.”

‘Jibba’ is still yet to taste a senior premiership, but has one flag under his belt in the reserves in 2009, when he split his season between seniors and the twos while returning from injury.

“Winning the flag in reserves was a highlight. I got injured first game in the seniors, missed half a year then came back through the twos. I played half and half (seniors and reserves) and we got knocked out in the prelim in the seniors and I was lucky enough to play a week later in the reserves granny and we ended up winning,” he said.

With at least another “two or three years” left in his legs, Ainsworth would love nothing more than to raise a senior flag at Ted Summerton, and reckons its still possible during his tenure.

“I do want to stick around for that. With the juniors coming up I think Moe has a good future. If I’m lucky enough to still be around when it happens that’d be awesome but we’ll just see how it goes,” he said.

“I just look at ’96 and ’97 when Moe didn’t win a game and the next year they were playing finals, so it doesn’t take much to turn it around.

“Most people aren’t lucky enough to play finals all the time but I think if you work hard eventually things turn around.”

Having already broken the club record of 259 senior games in 2012, ‘Jibba’ is still jotting down a chapter that will live long in the history books.