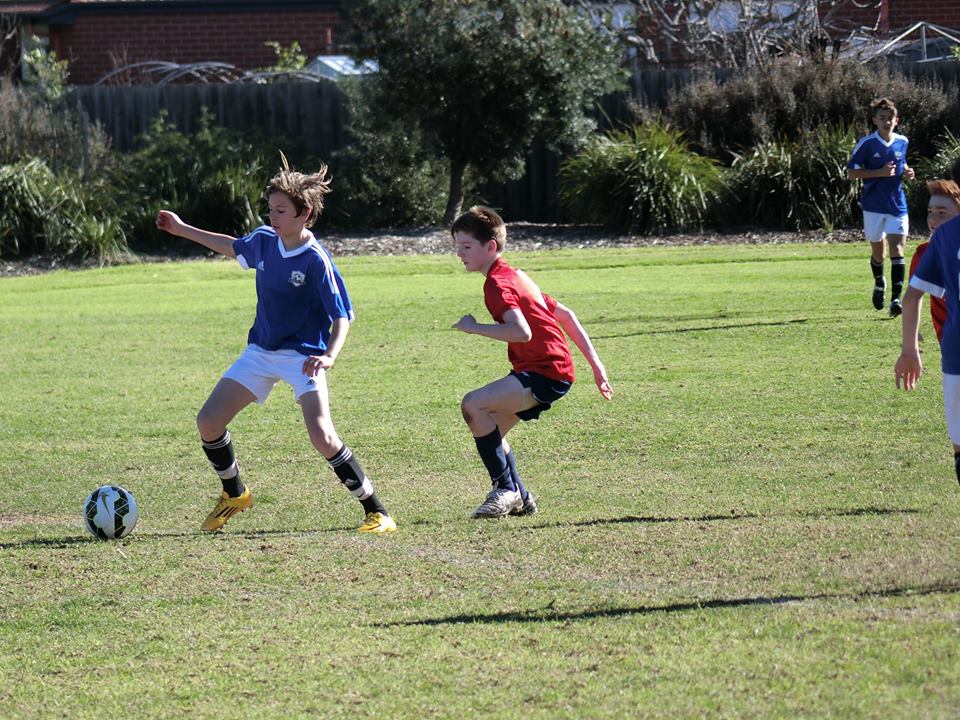 All Gippsland soccer teams were on the road this week, with the under 13s grinding out a win at Brighton SC, the 14s winning at Hampton SC, the under 15s unlucky against Keysborough and the under 18s frustrated against top of the table Doveton.

Gippsland FC and Brighton started off strongly, with the home team using their bodies and speed to break through the midfield while Gippsland played smart and simple football.

A throughball from Gippsland’s Jobie Heusmann propelled Billy Whitmore onto a run towards the box, only to be taken down but no foul was given.

The defenders were playing well, and the combination of a strong, smart midfield was once again at the heart of the structure.

Gippsland played the ball out from the back with quick release ball movement and high tempo football.

Antony Katiforis delivered a switch pass to Kishen Parikh who dribbled with confidence past three Brighton players into the box and was taken down.

A penalty kick was awarded and goalkeeper Ethan Farrell put the ball away to give Gippsland a 1-0 half-time lead.

The second half was filled with chances for both teams, but a confident Gippsland defence was too hard to break down.

Whitmore ended the game with a great shot which was well saved by the goal keeper.

Gippsland hit the lead midway through the first half when Tristan Donoghue was fouled just inside the 18 yard box.

Connor Dastey stepped up and tucked the penalty away to give Gippsland a 1-0 lead, which it took into the break.

With a strong wind at their backs in the second half Gippsland controlled the game and went 2-0 up through Adam Semple who finished off a Blake Whykes cross.

Hampton got one back with 10 minutes to go to ensure a thrilling end to the game for Gippsland.

A Whykes goal appeared to seal the game for Gippsland, but Hampton did not go away and made it 3-2, which was the final result.

The win puts Gippsland into fourth place on the table.

Gippsland played away to Keysborough and were missing key players with Jack Walton heading to England and Isaac Boulton in New Zealand for the Futsal Representative team.

Goal scoring opportunities presented themselves but the Keysborough goal keeper was equal to the challenge, pulling off a number of saves to keep his team in the game at the break with the score locked at 0-0.

The second half started similar to the first with Gippsland dominating possession, but unable to break the deadlock.

As the second half progressed Keysborough defended in numbers and tried to attack with the long ball on the counter.

Gippsland was equal to the task in defence and counter-attacked to set the forwards with goal scoring opportunities, but could not convert.

With the game looking as though it would finish in a stalemate, the hosts scored to take a 1-0 lead.

Gippsland fought hard in the final minutes but could not peg back the deficit.

After more than three weeks on the sidelines with byes, catch-up rounds and forfeits, Gippsland finally returned to the park when they travelled to top of the table Doveton.

Gippsland came out looking sharp and dominated midfield possession for most of the first half.

Despite dominating possession, Gippsland lacked the finishing touch meaning a luckless first half for the visitors as scores were locked at 0-0 at half-time.

Injury and illness left Gippsland with only one substitute but the boys did not let that worry them as their dominance was rewarded with a goal in the 55th minute.

After penetrating the Doveton defence with a strong run, Chris Oulton’s shot was blocked by the ‘keeper but the rebound was neatly headed in by Nelson Tombra.

Unfortunately for the visitors, Doveton bounced back quickly to level the score.

The game then developed into an end-to-end affair as both teams searched for the winner, but it ended in a draw.

This weekend all games are played at Trafalgar.

The under 13s take on Glen Eira Eagles at 11am, the under 14s face Mornington SC Blue at 12.15pm, the under 15s play Clarinda United SC at 1.30pm and the under 18s face Endeavour United SC with kick off at 3pm.