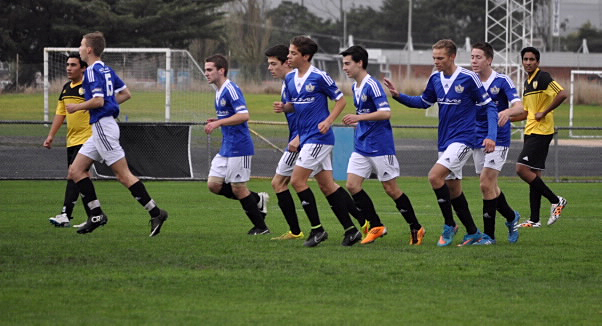 Junior soccer club Gippsland FC is inviting talented junior boy and girl players to try out for its 2017 squads.

The club was formed to provide a pathway for talented youngsters who wanted to play in Melbourne and play at a higher level.

Gippsland FC fields under 13, 14, 15 and 18 teams in Football Federation Victoria’s South East Division and hopes to field under 14, 16 and 18 girls sides next season.

Club under 14 boys coach Lee said the expansion to include girls’ teams followed the growth in popularity of the women’s game.

“We have more and more girls playing football in the region, which I think is in line with all over the country,” said.

“There are some girls who have been travelling down to Melbourne (to play)… so this is an opportunity for them to train locally and a different experience for them beyond the club football experience they’ve had.”

The club will hold trials for the under 13, 14 and 15 boys’ teams on Monday, 24 October and Wednesday, 26 October at 6pm at Trafalgar Recreation Precinct, Waterloo Road, Trafalgar.

Dates for the boys’ under 16 and 18 teams and the teams will be confirmed.

said the club was looking for “local talented, committed players who are looking to take their football to another level”.

“We like to make it a stepping stone for players so they can move to National Premier League or beyond,” he said.

The club has successfully provided opportunities for players including Traralgon City duo Billy Whitmore and Julian , who recently represented Victoria Country under 13s at the National Championships at Coffs Harbour.

Wonthaggi SC’s Blake , who played with Gippsland FC’s under 13s in 2015, was selected to represent FFV’s Skillaroos team in the National Premier League this year.

Anyone interested in trialling for Gippsland FC can register at gippslandfc.sportingpulse.net and registered players will receive an email confirming the trial details.