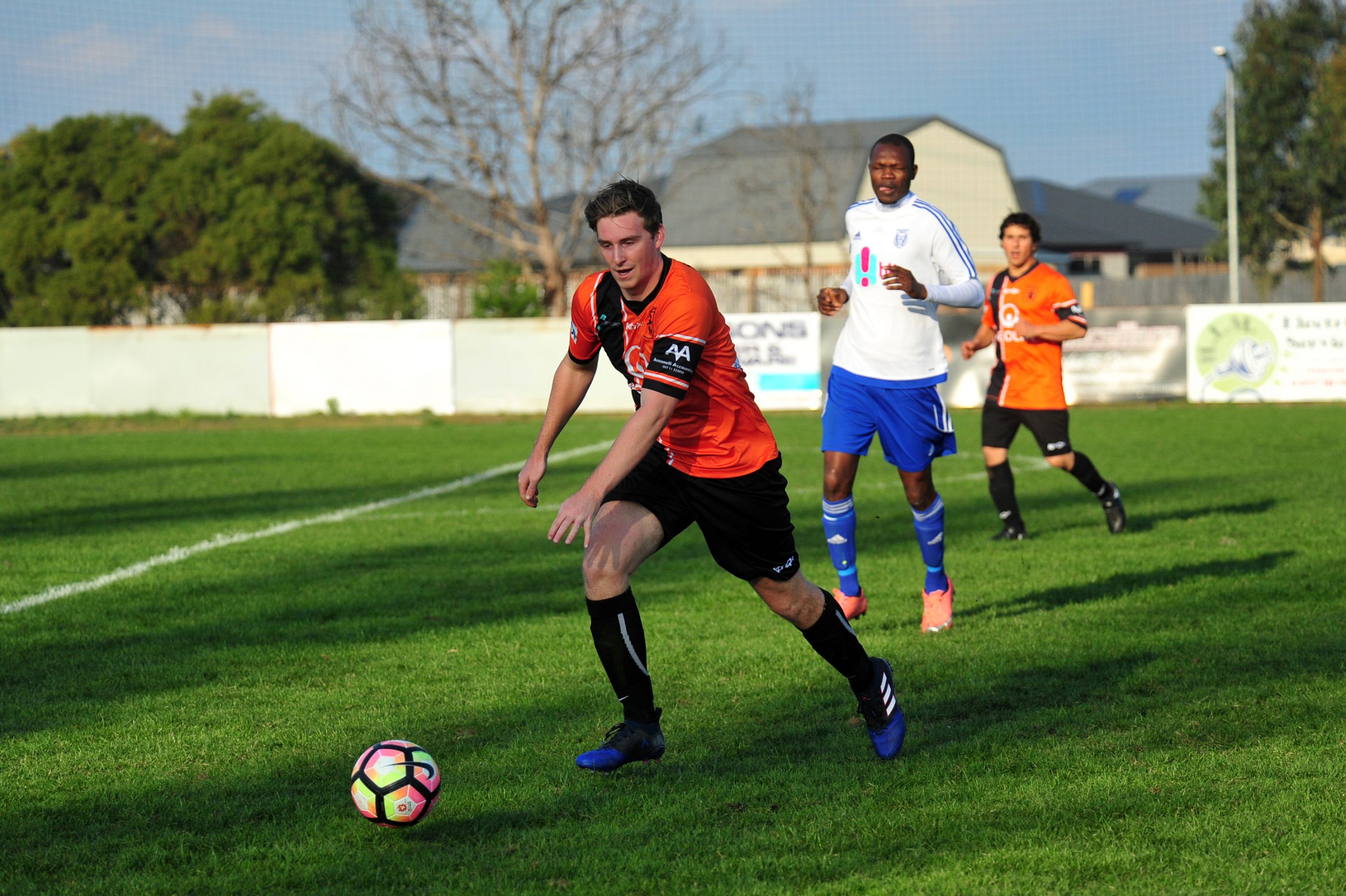 Trafalgar’s 2-1 victory at the weekend was a historic one, marking its first victory against league champions Falcons.

The win sees Trafalgar finish in sixth position on the ladder and earns it a finals berth.

Trafalgar was on the boil early with Josh Paredes in a starring midfield role and nearly breached the wall in the sixth minute through a powerful drive from Anthony Sossa.

Falcons lost defender Stefan Baccega who fell heavily and was stretchered off.

Falcons got the first goal through Jamie Pistrin and Trafalgar broke through shortly after when Josh Paredes passed to brother Nathaniel for a goal.

Lloyd King passed to Anthony Sossa to put Victory’s second goal on the board in the 80th minute.

Trafalgar withstood late pressure by the Falcons to reach its first ever senior final with a 2-1 win.

Sale was determined early and goaled twice within twenty minutes against East Gippsland through Tommy Nguyen and Nathi Khamchom.

A mid box scuffle saw Sale awarded a penalty in the 44th minute with a goal to Sam Jolley.

East Gippsland forced the ball forward from the centre and goaled through Thomas Forster at the half time whistle to give Sale a 3-1 lead.

The Swans scored the decisive goal at in the 57th minute through Nathi Khamchom to cement the 4-1 win for Sale.

The first half was tense and even, with Olympians reduced to 10 men at the 20-minute mark, which allowed the extra Fortuna player to roam.

Olympians eventually broke through with a clever goal from Peter Labros on the half hour.

Fortuna found itself in the same position, losing a player at 40 minutes.

The game fizzed out till half time as Olympians led 1-0 at the break.

After the break Olympians fired up and scored four more goals to cement second position on the ladder.

Goals were scored by Henri Scott (62), Bryson Tanti with a brace in the 72nd and 85th minutes and Kuku Mahmoud at 79 minutes to give Olympians a 5-0 victory.

Newborough/Yallourn finished its season in fitting fashion with a resounding win against Tyers at the weekend.

Three goals in the first half at 32, 38 and 44 minutes gave Newborough/Yallourn a 3-0 lead at half-time.

Goals to Josh Membrey in the 88th minute and Jaydon Bates in the red zone lifted Tyers but Newborough/Yallourn finished with the victory, 7-2

An early goal for Monash through Jesse Davis in the second minute unsettled Churchill and took the Wolves to a 1-0 lead at half-time.

Monash broke through for its second goal through Ethan Lawrence in the 50th minute and finished with a 2-1 win.

The Roosters were too strong for Moe at the weekend and sealed a 6-0 victory.

Pegasus Women’s team faces its biggest test on Sunday when it meets Casey Panthers in a fight for the league championship.

Pegasus lead Casey by two points, and a win to either team will secure the title.