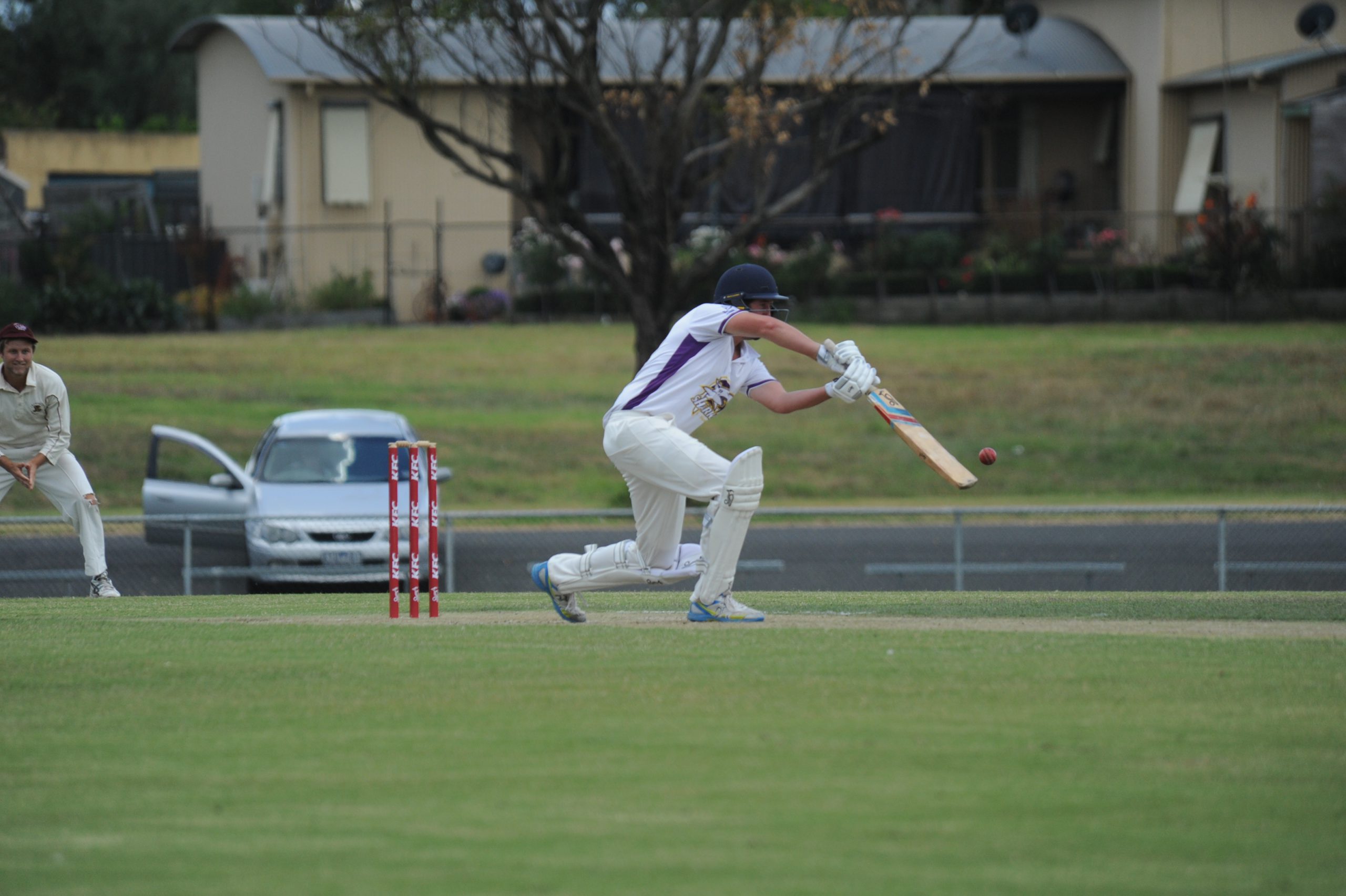 Defending premier Ex Students has relished a return to form at the weekend with a resounding win over fellow flag fancy Churchill to reclaim second spot on the Traralgon and District Cricket Association A grade ladder.

The Sharks won the toss and looked to make the most of the home ground advantage by opting to bat.

Openers James Pryde and Matt Robertson were up to the challenge early until the former holed out on 13 to make way for danger man Jordy Gilmore.

Robertson’s dismissal shortly after for 23 signalled a minor collapse, with the next three wickets falling for a total of 20 runs before Rick Battista came in at number seven and steadied with 41 to see the Sharks finish at 9/153.

Churchill couldn’t make a dent in the target and were all out for a measly 79 in an innings where no player made more than 19.

Ex Students batted again and declared at 1/100 after 16 overs to leave Churchill 34 overs to score the 175 needed.

In a nail biting finish Churchill lost seven wickets and needed seven off the last over for a reverse victory.

Rovers have dashed the hopes of Traralgon West in round 10 after a solid performance on day two saw the home side hang on to secure the win.

Traralgon West looked set to put an end to a five-year long hoodoo after batting first to set the tone with an impressive total of 180, including half centuries to Tim Fitch and Nilla Thillakarthne.

Rovers lost a wicket early with the loss of Justin Little for seven, but a stunning 131-run partnership between Ewan and Dougal Williams steered the side to victory just before tea.

Ewan was in fine form and notched 84 before being run out while Dougal Williams went on to record his first A grade century with a stellar 102 not out.

Imperials have signalled their intent to play finals in 2017/18 with a commanding performance against Toongabbie in round 10.

Toongabbie was sent in to bat and was skittled for just 84 thanks to the efforts of Tom Coulson (4/32) and Joel Randall (3/19).

Brett Chapman led the charge for Imperials in the run chase and got his side off to a jump start with an impressive 65 to reach the target of 150.

Toongabbie went in to bat again and fared better second time around, with a half-century from Tim Dunn helping the visitors to 9/173 and the win.

Skipper Aaron Lynch was the pick of the bowlers for Toongabbie with 5/27 while Tom Coulson and Nat Campbell both took home bags of five for Imperials.

Glengarry has reclaimed its spot inside the top four at the weekend with a win over Centrals in round 10.

With the exception of Josh Stacey (70) Centrals failed to impress after being sent in to bat and were toppled for 164.

Brenton Ould’s 21 was the next best while Stuart Brooks chipped in with 19.

Adam Brady led the charge for the 2016/17 runner-up in attack and finished with 4/36 while Max Merton was the other multiple wicket taker with 2/34.

The outlook for Glengarry was grim on day two after it slipped to stand at 4/25, but a rescue mission led by Alistair Jenkin and Richard Wilson helped the side to a win.

Jenkin top scored for the innings with a season-best 92 and was joined on the honour board by Wilson who finished unbeaten on 55.

MTY Raiders have solidified their stranglehold on the A grade ladder with a crushing win over CATS in round 10.

Raiders elected to bat and were characteristically steady early before Michael Higgins holed out to Ben Julin on 12.

Matt Dyke enjoyed his best day out for the season and came in at number six to top score for Raiders with 60.

Jason MacFarlane was also handy and contributed 40 while Tom Woodley chipped in with 29 to take the ladder leader to 9/218.

Adam Nunn and Ben Julin shared the bowling duties for CATS and finished with three wickets each and Callum Stewart took 1/42.