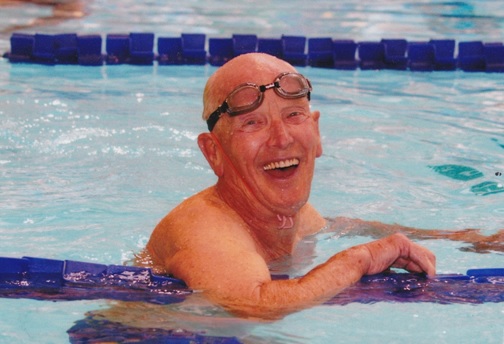 Swimming legend Don Coupe was remembered earlier this year when the Moe Swimming Club held its inaugural meet in his honour.

The late, great Coupe left an indelible mark on the Latrobe Valley before his death in September, both in and out of the pool.

Born in Rochdale, England in 1929, Coupe immigrated to Australia in 1951 and started work at the State Electricity Commission, where he met his wife Margaret.

The couple started a family and had three daughters and Coupe became a doting grandfather of five.

Although swimming was a strong theme within the family, Coupe had many strings to his bow.

He was an avid gardener with a home garden full of beautiful plants and an abundant vegetable garden.

He took a special interest in growing and showing orchids and was a member of the Traralgon Orchid Club.

Between 1969 and 1975, Coupe served on the council at Newborough’s Murray Road Primary School where he and Margaret formed part of the original group which helped set up Woorabinda School Camp at Yallourn North.

Cricket was a passion for the sports-mad Coupe, who took up the game in 1951 and was awarded life membership at the Newborough Cricket Club.

Table tennis and lawn bowls were also favourite pastimes but it was in the pool where he shone.

Despite not taking up the sport until his late 40s, Coupe went on to become one of the world’s best masters swimmers and held 27 national and 42 state records over 22 years of competition.

Coupe was also a great crusader and was key in having the Yallourn North pool solar heated and fought to keep the Moe outdoor pool open when it was in danger of closing.

He not only involved himself as a committee member but also taught children to swim, qualified as chief judge, chief starter and referee and officiated at many school sport carnivals.

For this, he received a service award from Swimming Victoria in 1991.

He was an inaugural founding member of the Gippsland Flippers Masters Swim Club in 1978 where he competed at interclub, state, national level and often placed in the top 10 at world events.

He became a life member of the Flippers in 2007.

Gippsland Flippers secretary Sue Graham said Coupe was an irreplaceable part of swimming in Gippsland and was sorely missed.

“For 88 years, Don lived a full and happy life without having to rely on others,” Graham said.

“Don had great respect for others, and many, many people respected and liked Don.

“Many of us loved him dearly and we will miss this special man greatly.”