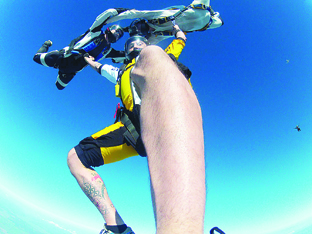 The mere thought of jumping out of an aeroplane is enough to scare many people silly but for David Bonnici it’s no big deal.

Skydiving is usually a once-in-a-lifetime, bucket-list type of activity but the Morwell resident has done it a staggering 1500 times.

Bonnici racked up dive 1500 last weekend and got to do it in his own backyard.

He has jumped in California, New Zealand and Fiji, from 737 jets, air balloons and helicopters, but said there was a diving haven in the heart of the Latrobe Valley.

“People are still travelling to St Kilda and Torquay when they’ve got the availability right next to their home in Traralgon,” he said.

“We can see the Prom some days and you can see right down the ranges, Blue Rock Dam, Thompson Dam.

“We were looking at 90 Mile Beach the other day and it’s definitely nice. Every weekend I’ve got the availability to jump next to home.”

“When pay TV first came out it’s like all of the sudden I was just flooded with this sport that looks so amazing,” he said.

“None of my mates wanted to do it with me so I went to Bairnsdale and I did my first jump, got down and said ‘can I do that again?’ and that was it.”

The 44-year-old executed a highly-technical hybrid dive with two other members for number 1500, which is only achieved through years of practice.

“It takes a lot of time to be able to do those things. It doesn’t happen overnight, that’s for sure,” Bonnici said.

All the work has taken him to great heights and he came in second at nationals.

“But we put in 200 training jumps just to get to that level.”

For all the thrills, Bonnici admitted the extreme sport had taken its toll on his body over nearly 22 years.

“For me, especially getting old, my knees are shot. I had four years off the sport with a perforated eardrum.

“I’ve had to get back into it after having time off but it’s like riding a bike.”

Despite the staggering numbers, Bonnici said every jump was different and was the result of careful planning and tactical execution just like any other sport.

“When you first start jumping it’s like ‘I’ve just jumped out of a plane’, but then it’s like ‘we just did this in the air, I was just in the air with eight blokes’,” he said.

“It becomes about engineering something on the ground and pulling it off in the air.

“No-one knows what’s going on above their heads in the sky every weekend.”