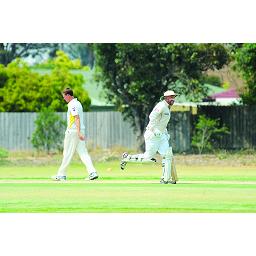 Yallourn North are in the box seat to seal a win against Traralgon West thanks to a standout performance from Glen Sheekey on day one at the weekend.

Sheekey’s century helped the Bombers to a respectable 198 but helpers were few and far between with Curtis Howell’s 29 the next best any bat could manage.

TWIN centuries from Nick Duncan and Mark Rawson have made Jeeralang-Boolarra a seemingly insurmountable task for Latrobe heading into day two of round 13.

After winning the toss and electing to bat, the Panthers never looked back.

A 147-run first wicket stand between Brett Duncan and Nick Duncan sowed the seed for the home side as Nick went on to notch 103.

Mark Rawson came in at four and was equally damaging, notching his century before being run out for 100 to leave his side in excellent shape at 5/327 before captain Stan Urbanic declared.

In reply, Latrobe lost the wicket of Steven Freshwater to be at 1/25 from 10 overs at stumps with Benn Zomer and Jamie Coltman to get play underway when the game resumes on Saturday.

TRAFALGAR will have to work hard to avoid defeat when play resumes this weekend after Centrals had them on the ropes at stumps on day one.

The Ships were all out for 129 in the 74h over after heading into bat at Apex Park.

Openers Liam White (seven) and Leo Connolly (six) failed to make inroads and Christian Burgess was the best of the batsmen and finished with 44 at number eight.

Aydan Connolly chipped in with 22 and captain Rhys Holdsworth 20 while Marc Fenech and Dylan Freitag finished with three wickets each for Centrals.

In reply, the Lions lost two early wickets to finish the day at 2/18 after 100 overs.

Play will resume on Saturday with Nathan Freitag and Ross Allen at the crease.