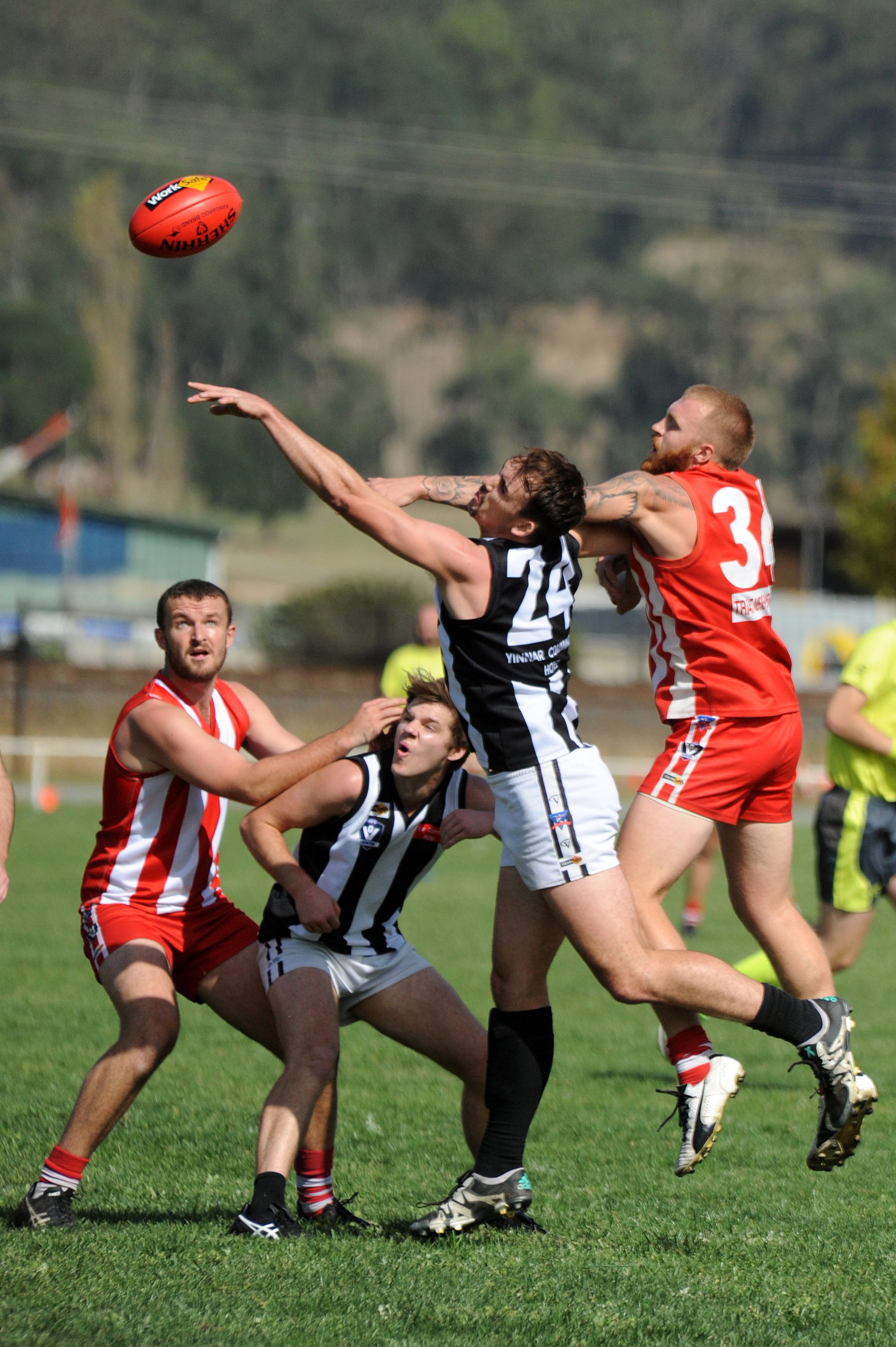 The unveiling of Trafalgar’s 2018 premiership flag set the scene for the replay of last year’s grand final clash against Yinnar, however, it was to be a different result in round one of 2019 with the Magpies claiming a narrow victory, 14.6 (90) to 13.8 (86).

The Magpies, with new coach, Kane Grimstead-Jones at the helm and well supported by some big name recruits including former Traralgon player Michael Burge, looked well placed to challenge the reigning premiers when they jumped the home side in the first quarter to lead by 19 points at the first break.

Trafalgar patiently worked their way back into the contest to narrow the margin back to 10 points at the main break.

An arm wrestle of a third quarter only narrowed the margin by a point but it did give Trafalgar a chance of an unlikely victory.

Bloods coach Clint Eisendel was happy with his young team and believes they will get better as the season progresses.

“We will need to get better defensively, starting in round two, but Yinnar were young as well and seemed to be fitter and quicker than in 2018.”

The reigning premiers didn’t give up and, in the highest scoring quarter of the match, got within four points before the final siren sounded.

Yinnar faced and overcame one of the toughest tests in MGFL footy, defeating Trafalgar at their home ground.

Grinstead-Jones said his team still had plenty to work on but “the young kids really held their own and took the game on which was pleasing”.

The Magpies now face another challenge when they host Mirboo North in round two.

After two long years Boolarra broke its drought and claimed a victory, defeating Thorpdale, 11.2 (68) to 6.16 (52), after being challenged right to the final siren.

Boolarra showed some impressive patches of form through their preseason in preparation for their round one clash against an opposition who themselves had faced some adversity leading into round one of the 2019 season.

Thorpdale were hit with an exodus of players late in 2018 and only the recent appointment of Ray Pickering stopped the bleeding in time to rustle together a squad in readiness for what was all of a sudden going to be a crucial match for the finals’ contenders of just a year ago.

An accurate start by the home side was crucial in the Demons leading at quarter time, four straight goals, giving Boolarra a rare quarter time lead and validating coach Tony Giardinia’s belief that round one was a winnable game, despite two long years of heartache.

By half time, however, it had become obvious if a victory was to be secured it would take everything the Demons had.

With scores locked at 36 apiece, accuracy was key for Boolarra’s half-a-dozen goals straight to the visitors’ five goals and six behinds.

Jessie Giardina did what he does best, kicking goals, and finished the day with four. He was well supported by Sam Marzou with three and Patrick Haines’ two.

Thorpdale, on the other hand, could not buy a goal in the second half, adding just one major and 10 behinds.

A three quarter time lead of just seven points was extended to a 16 point win, with the accuracy shown in the first quarter proving to be a major reason for the victory.

Demons coach Giardinia said he was very pleased with the club’s first win in two years.

“Thorpy took the game right up to us and never gave up, and the boys had to find a way to win,” he said.

“[We had] eight new players playing their first game and it will take a few games to gel.”

Traditional slow starters to a season, Mirboo North had prepared to offer more in the opening rounds of the season than in previous years by throwing the kilometres into the legs of the Tigers squad in preparation for their first up clash.

Their visitors for the day had hoped to catch the Tigers napping, with Newborough believing their youthful enthusiasm and speed in good conditions could catch the home side asleep.

That notion was put to bed, however, with only inaccuracy by the home side not blasting the Bulldogs away, two goals and eight behinds a reflection of the dominance that the Tigers held.

By half time that 19-point lead had quickly extended to 52 courtesy of an eight-goal second quarter. The goals were shared around with B. Wilson finishing with four and L. Powell, P. Taylor, J. Blair and R. Kratzat two each, not to mention another seven players who also claimed one each.

Taylor said it had been a few years since the Tigers had started the season with a win.

“A big focus is learning off each other, being patient, to build trust and respect.”

New Hawks coach Devon Soutar had carefully crafted a squad and preseason, eager to add some consistency to what was delivered by his team on a weekly basis. Equally the Rovers had worked hard to fill gaps left by outgoing players and replace them with talent moving forward.

Hill End relished the conditions early and took advantage of a breeze to hold an 11-point lead that was only reduced to eight at half time.

Soutar said he felt his team was strong “despite the scoreboard for the most of the match.”

“Our intensity and communication fluctuated,” he said.

“Hill End did well and maximised their opportunities in front of goal.”

There is an expectation that the final five of 2019 will only have room for one of these two sides, so what unfolds from here on in is going to be crucial.