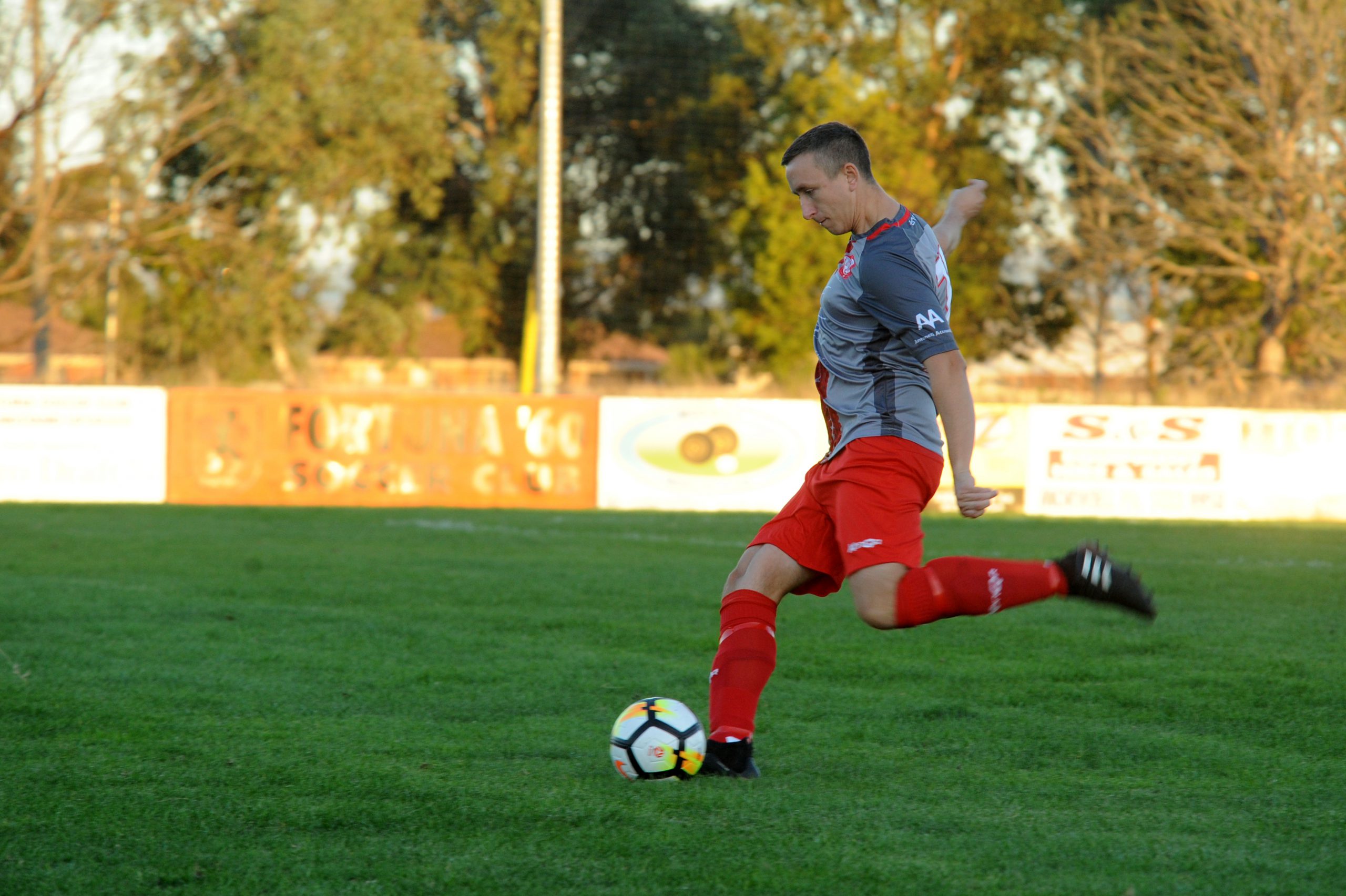 It was a nightmare round for goalkeepers in the LVSL at the weekend with a total of 30 goals scored across five matches on Sunday.

Damien Gilbert (Newborough/Yallourn) and Liam Aqualina (Traralgon City) were the only keepers to finish with clean sheets.

Fortuna avenged their last defeat to Trafalgar with their highest score yet against Victory, 7-1, with a hat-trick to Hayden Cook.

They were off the mark early and had two goals within 10 minutes from Brandon Scott and Cook.

They had a third goal at 16 minutes from Oliver Spiteri but Trafalgar clawed a goal back on the half-hour through Chris Beasley.

Two more goals by Fortuna before half-time by Shane Cassar and Cook helped them into the break with a 5-1 lead.

The Lions broke through again at 80 minutes with their sixth from Jonathon Cook and Hayden Cook’s third three minutes before the final whistle sealed the rout.

A five-goal haul to Jamie Pistrin enabled Falcons to secure a big 7-2 victory over Sale.

Falcons went into the break with a 2-0 lead. Sale, however, produced some magic just after the break as Jacob Richardson scored a boomer to give the Swans some hope.

Fortuna picked up a cog and immediately answered Sale’s goal to give them a 3-1 advantage.

The floodgates opened for the Falcons as they added a further two goals before Sale got one back with Richardson’s second.

Falcons put on another two goals from Nick D’Allesandro and Kevin Carcella in the final two minutes to take the match, 7-2.

Traralgon City had a comfortable but hard-earned win over Monash, 3-0.

Roosters keeper Liam Aqualina kept them ahead, especially in the second half when he pulled off four excellent saves to thwart the Monash strikers.

Traralgon City’s Jake Budija scored the first of his brace at 11 minutes after a cross from Nathi Khamchom and his second on the half-hour.

A miskick by a Monash backer helped Nathi Khamchom score number three for the Roosters.

Efforts by Andreas Nilo, Braden Paulett and Chris Oulton were held off by keeper Aqualina who kept a clean sheet for the match as Traralgon City ran out 3-0 winners.

League leaders Newborough/Yallourn had their first win over Olympians since 2015, 6-0.

The home side was 1-0 up at half-time through Hayden Tanti.

Tanti scored three for the game and leads the league goalkicking table with nine.

Mark Fairbrother scored the final goal to complete the 6-0 win.

Eight yellow cards and one red card were issued in a heated match where Churchill overcame Moe in a tense struggle, 3-1.

Taylor Jackson opened the scoring for Churchill at 47 minutes and Liam Johnson made it 2-0 just short of the hour.

Jackson came back with his second at 66 minutes but Moe’s Ty Georgiou scored a consolation goal six minutes before half-time.

Fortuna went down to Trafalgar 2-1 and Newborough/Yallourn struggled to beat a fired up Olympians, 1-0.

Moe overcame Churchill, 2-0 and Falcons had a surprise win over Sale. 3-1.

Fortuna will be out to strengthen their position on the table this weekend against Olympians.

The Lions got their act together against Trafalgar last week as Hayden Cook proved a handful for the Victory defence.

Olympians have actually won four of their last six meetings against Fortuna.

Cross-town rivals Moe and Newborough/Yallourn face off in what will be a tough match this weekend.

Newborough/Yallourn will head in as hot favourites with plenty of striking power.

After a demolition of Sale last week Falcons will travel to take on Monash this weekend.

Monash will have to watch Jamie Pistrin who booted a personal best of five goals in round six.

Sale, yet to score any points, face a tough challenge in Traralgon City.

Churchill with two wins on the board are keen to add another scalp to the belt when they host Trafalgar.