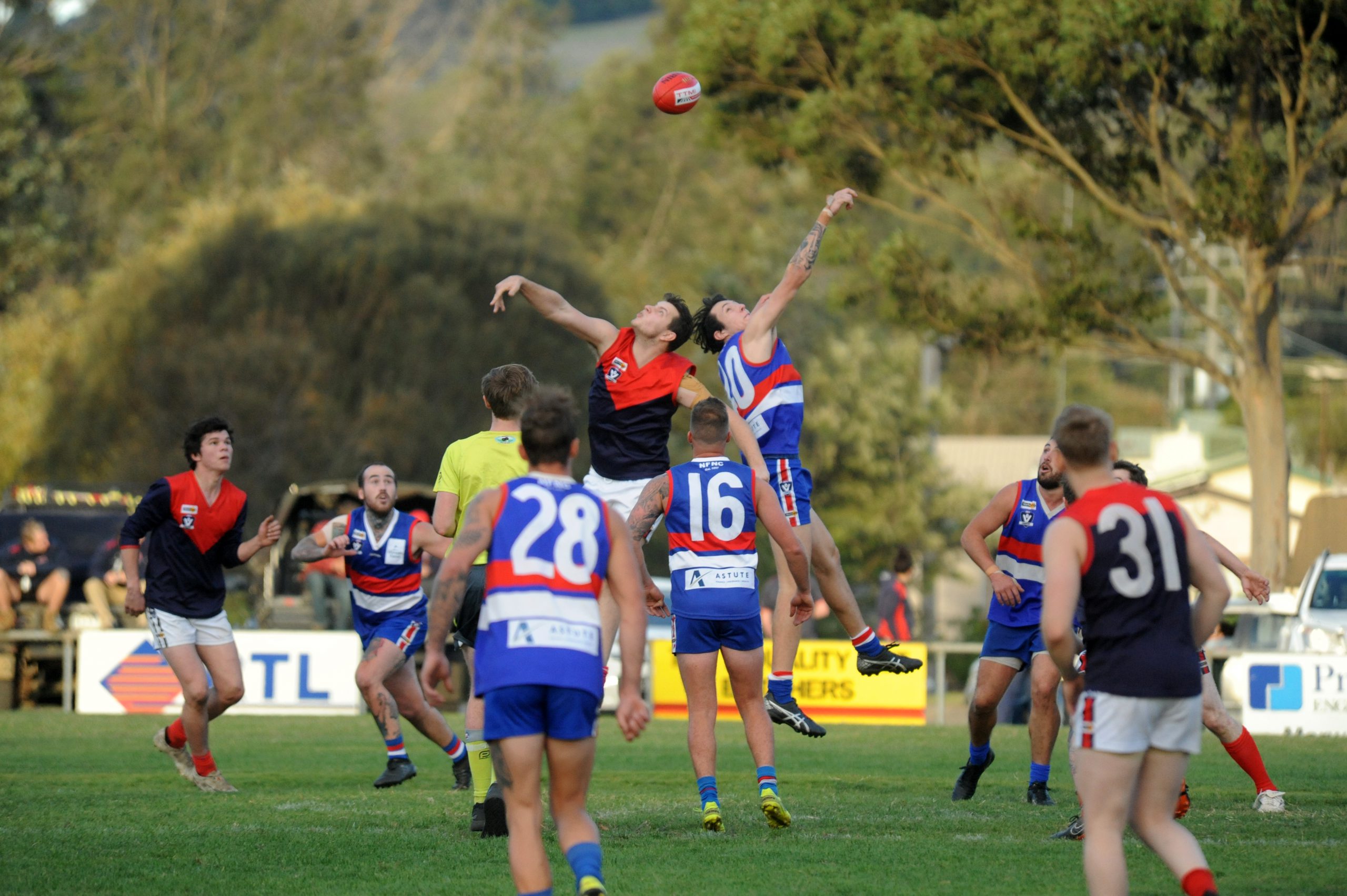 Four just won’t go into three no matter how hard you try, so with that in mind, the winner of this clash was always going to be better placed for a top-three spot.

The unbeaten Bombers were prepared for the very best of the Hawks, who had been unbeaten up until last week’s loss to Mirboo North.

The signs of what was to come might not have been obvious in the opening 30 minutes of the afternoon when the Bombers, although leading by 17 points at the first quarter, were also preparing to unleash some of their best football of 2019.

Six scoring shots to four at the first break might indicate that the match was unfolding as expected between two sides on track for finals football in a few months time, but with the Bombers converting three of those six shots on goal and the Hawks unable to find the big sticks, the writing was on the wall that the visitors might be in for an even tougher afternoon than they had planned for.

Morwell East coach Devon Soutar said “when I asked for a response, we executed our plan, we wrestled it our way for very short periods after half-time but this is never going to be enough to challenge the competition’s juggernaut”.

Those fears were realised at the main break as the home side started to control almost every position on the ground and play with their visitors much like a cat does with a ball of wool. Morwell East were still stranded on just four points as they watched the home side dance around them to a 60-point lead, peppering the goals another 13 times and added five goals, eight.

Bombers coach Barrie Burnett said his team stuck to their plan and executed it well.

“Our pressure was great all day. If anything, we just need to work on our goal kicking,” Burnett said.

Dean MacDonald (five goals) finally kicked more majors than his teammate Keenan Hughes (two) but both were part of the unit that could have done so much more with the opportunities they had.

The Hawks woke from their slumber in the third quarter, to at least let the Bombers know they were there, with a couple of goals but they were still outscored by the league leaders who were just going through the motions.

Soutar said it was an “extremely disappointing result but we learn again, lick our wounds and reset”.

“They were seriously good in transition, clean and crisp by foot. We just couldn’t slow them down.”

This result was a reality check for Morwell East and let them know in no uncertain terms just how much work still needs to be done before they can match it with the league’s best.

The Bulldogs had prepared themselves for a winning streak of two in a row a few weeks ago, even on the end of a four-game losing streak to open the season.

Newborough coach Dean Caldow had witnessed “glimpses” of what was required in those losses that pointed towards a change of fortunes.

What he and his team confronted, however, was a desperate Demons outfit, eager to show their travelling supporters they appreciate their patience over this journey.

The opening quarter delivered two sides fighting for competition respect, and in some ways that may be just as important, if not more so, than the points.

The visitors’ accuracy gave them a three-point lead at quarter-time, while five goals from six opportunities would be crucial later in the day, as the Bulldogs wasted half of their eight attempts on goal.

Caldow said he was “really disappointed we didn’t get the four points”.

“Our first 20 minutes is the best ball movement and skills I’ve seen all year, but from there it was our inconsistency and turnovers that let them back into the game. We certainly let that one slip away,” Caldow said.

The second quarter was an arm wrestle with 36 players giving their all, desperate to be part of a winning team for just the second time this year with the home side regaining the lead by two points.

Third quarters are seen as premiership quarters, when teams make their move to claim a victory, and that’s what the visiting Demons did, adding three more goals and a 10-point lead as they faced a final 30 minutes of hard work.

Caldow’s Bulldogs were down to one on the bench for the second half.

The entertaining match had the crowd on the edge of their seats with Boolarra gutsy to the final siren and winners for the second time this year.

The Tigers’ biggest opponent might have been complacency within the group given their perfect start to the season. Six wins in as many matches has a way of making a group feel pretty good about themselves and its usually at this time they might also become most vulnerable.

The conditions were always going to make for a tricky day to be played on a tricky ground, but there was no magic on the day, just tough, hard, honest footy.

The visitors got off to a solid start, their week off courtesy of a bye appearing to be just the tonic for a reversal of form and fortunes as they lead the unbeaten Tigers to the first break by four points.

Trafalgar earned respect and admiration for the way they played the game under coach Clint Eisendel through their premiership season of 2018 but in the early parts of this year something appeared to be missing that had the Bloods struggling for wins and fighting for survival with a pack of teams in the middle of the ladder.

It was only at the final break that Mirboo North finally found the lead, a three-point margin, that promised a final quarter to remember.

Eisendel said “Mirboo were very impressive all over the ground”.

“It was a very tightly contested game that could have gone either way. We were disappointed not to get the four points given our effort across the 100 minutes.”

The Tigers had run out games well on almost every occasion this year, leaving their opposition with hands on knees wondering how they could match it with what appeared to be a vastly fitter side, but it wasn’t to be on this day as the Bloods fought with everything they had.

In an already low-scoring affair, it was the last 30 minutes that was the lowest of all four with neither side kicking a goal and Mirboo North only kicking one more point than Trafalgar, three to two, to hold on for a win that extended their streak to seven.

Trafalgar showed they will cause some problems for opposition sides in the future.

“[There were] plenty of positives for us to take into coming weeks,” Eisendel said.

“We are definitely right back on track and I’ll look for consistency over the next few weeks.”

This was one the Magpies couldn’t afford to lose.

An inconsistent season to date meant they were on the precipice of falling further down the MGFL ladder than they wished given the significant improvement of clubs around them.

A fast start was always going to be crucial for the Magpies but that’s not quite how it worked out with the visitors throwing everything into the contest.

Yinnar led by 13 points at quarter-time, a lead that they extended to 27 at the main break, but they were also well aware they were in a game of footy.