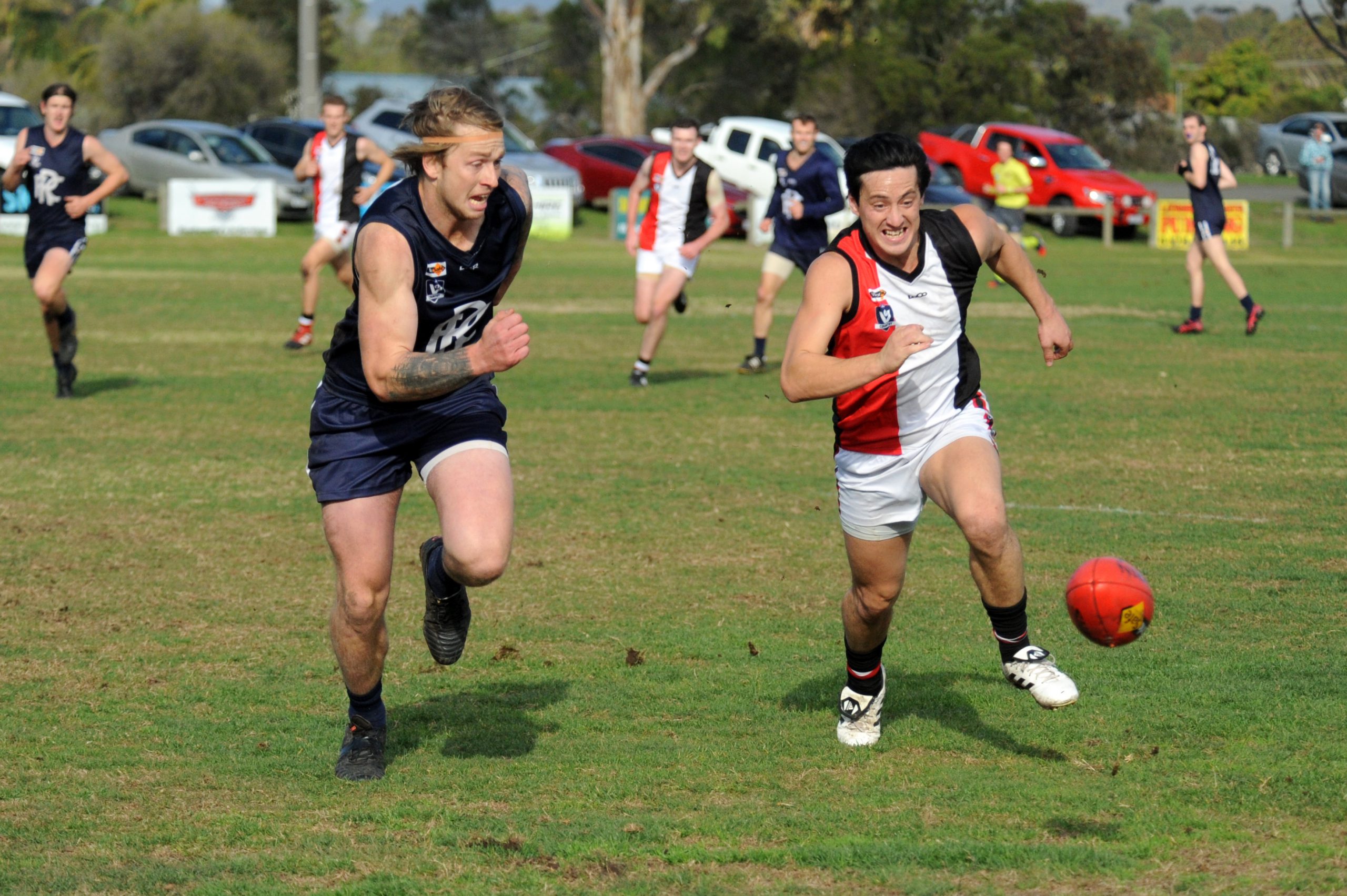 Heyfield are on a knife’s edge and at risk of losing their position in the top five after a surprise loss to the Demons at Yarram in round eight.

Before the game, the Demons and Roos sat second and third, respectively, but a shock 10-goal loss to Heyfield has pushed them to five, clinging on to a top five position by the barest of margins.

The Demons took a 27-point lead at the first break thanks to some accurate kicking in front of goal, including Jarryd Swift who bagged eight for Yarram in his side’s impressive win.

At half-time, Yarram’s lead increased to 39 points before the Roos were able to claw back some ground heading into the final term 34 points down.

Charlie Driffield (three) and Mathew Rodaughan (two) were the leading goalkickers for the Roos.

The win for the Demons takes them to six wins and two losses and means they retain second place on the ladder, two games behind leader Churchill.

Accurate kicking in front of goals has helped Rosedale to their fifth win of the season, crippling Cowwarr in round eight by 11 goals.

The Blues took a 31-point lead into the first break and were able to boost their stronghold on the game in the second quarter with an eight-goal lead at half-time.

Frazar Brouns and Brandon McDonald kicked seven goals each in the clash while Kaleb Watson (three) and Will Logan (two) also added to the Blues’ final score.

Despite the loss, Cowwarr’s Shane Morgan still leads the North Gippsland top goalkickers for the season with 28, behind Rosedale’s McDonald with 26.

Morgan kicked two against the Blues but it was Dale Murphy who was crowned the leading goalkicker for the Saints in his side’s loss with four goals.

The Saints sit seventh, three games behind Sale City on sixth, while Rosedale maintain their position in the top five on fourth, but equal on points with Heyfield and Sale City who sit below them.

Inaccuracy in front of goals contributed to the Bulldogs’ loss at home, kicking only one goal and six behinds in the first half of football on Saturday.

The Bombers took an early lead in the first quarter and headed into the second term leading by 26 points before a 27-point lead at half-time.

Jordan Collopy kicked a third of the Bombers goals while Luke Miller and Ricky Cochrane booted two each.

The Bulldogs added two goals to the scoreboard in the third term and held the Bombers to just one major before three-quarter-time.

However, TTU came out and displayed some of their best football in the fourth quarter, adding five goals to take the four points at the end of the game.

Jaxsyn Whitehill (two) was the leading goalkicker for the Bulldogs while coach Jacob Schuback and Ben Chivers scored two apiece.

The win moves the Bombers into third while Sale City head to sixth, only separated by percentage from Heyfield (fifth) and Rosedale (fourth).

The Magpies took a slim lead at quarter-time with only two points separating the bottom-end sides at the first break.

The Wildcats added four goals to the scoreboard in the second quarter, holding the Magpies to just two goals to take an eight-point lead at the main break.

However, that was the last sniff the Wildcats would get after Glengarry added eight goals in the third term to turn the game around and lead by 35 points.

Wildcats coach Ryan Foat claimed four of Woodside’s goals and was named among the best, while Tahi Davidson and Andrew May (both four) were the leading goalkickers for the Magpies.

In another disappointing result for the Tigers, Gormandale were unable to get off the ground and claim their first win for 2019 against ladder leader Churchill, losing 22.20 (152) to 5.4 (34).

The Tigers would be thankful the Cougars’ inaccuracy in front of goals meant they lost by a more respectable result, particularly given Churchill registered 20 behinds.

Aidyn Sheers kicked six majors for the Cougars in their 118-point win while Ben Skinner (four) and Dean Degroot (three) were named among the best on ground for Churchill.

Jack Brincat kicked two for the Tigers while singles were shared among five other players.

Gormandale remain the cellar-dweller, yet to win a game this season, while Churchill remain undefeated on the North Gippsland senior ladder.