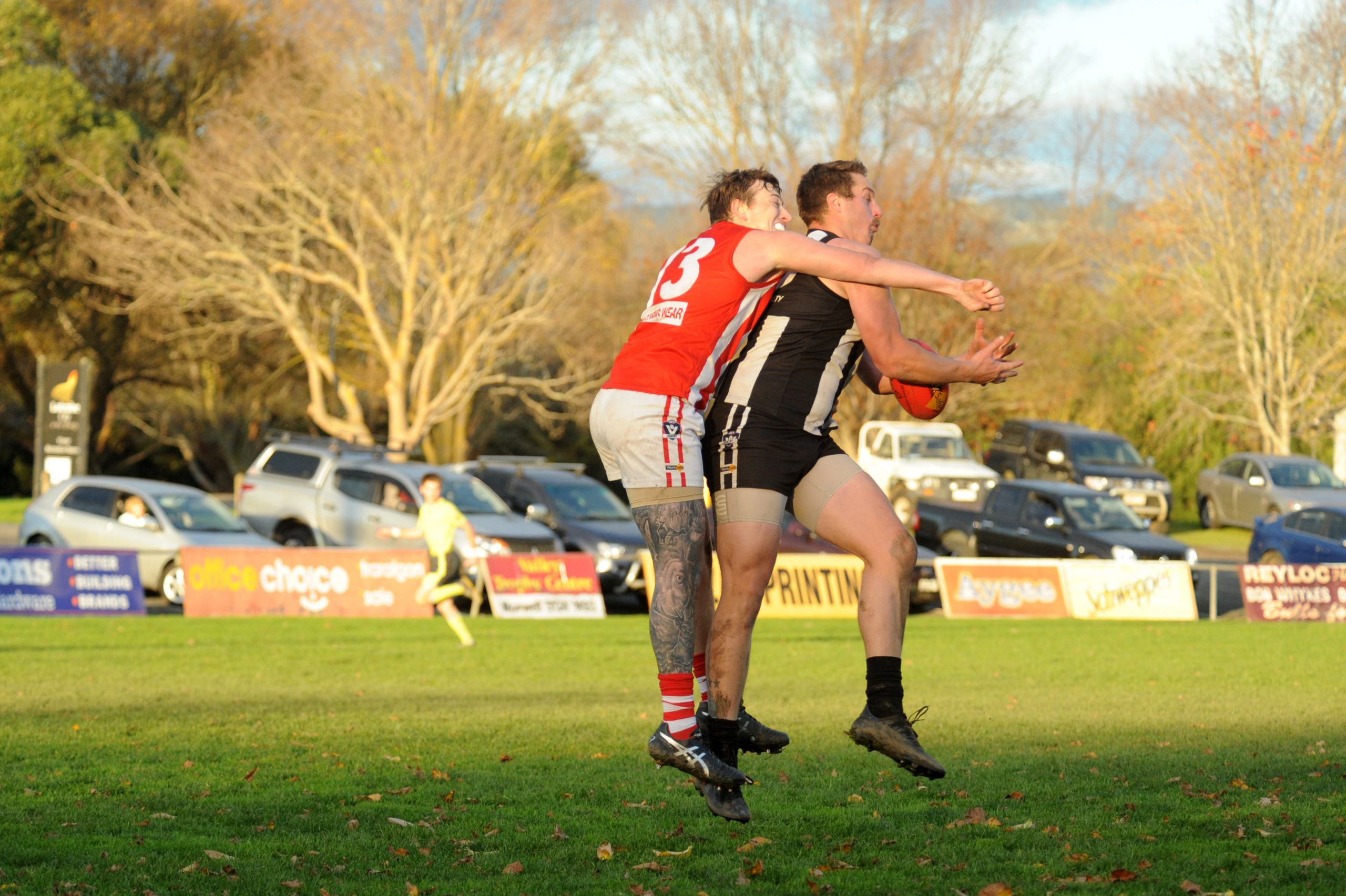 Yinnar responded as good sides do, coming from behind in the final quarter to snatch another narrow victory over Trafalgar, 11.8 (74) to 11.6 (72).

The Magpies jumped out of the blocks in the first term, playing some of their better footy for the season and leading by 25 points at quarter-time.

Trafalgar edged a few points closer at the main break as they started to work harder around the contested ball and make more of their opportunities.

The Bloods made a move in the third quarter which turned the game on its head.

The reigning premiers put together some of their best football for a while, kicking better than six goals for the term and turning a 21-point deficit into a three-point lead at the final break.

In the final 30 minutes both sides showed all the desperation normally reserved for finals football but it was the Magpies who made more of their opportunities to kick one goal, two behinds from their three chances, while the Bloods missed their three chances.

“The game was played with very big momentum swings and we got off to a good start, we knew they would come back. We still have a lot of areas to improve in,” Magpies coach Kane Grinstead-Jones said.

“I was really proud of the younger group and the way they cracked in but stayed composed.”

The Rovers started well, with plenty of enthusiasm complemented by intensity at the ball giving them a 15-point lead at the first break.

The visitors lost two players in the warm up but still had the ability to compose themselves and started to play more of the game on their terms in the second quarter.

The Hawks chipped away at the deficit to bring it back to just three points at the main break.

In recent weeks Chase Saunders had been the shining light in front of goals but on the weekend it was Luke Mulqueen who led the way with six of his own for the Rovers.

Hill End made the second half of the match their own, dominating the Morwell East side and sending out a signal to the rest of the competition in the process.

The Rovers four goals to one the third quarter was bettered by their final quarter of five goals and five behinds to no score in the final term.

“We started strongly but a lapse in the second quarter allowed [them] back into the game,” Hill End coach Mike Santo said.

“I reminded the boys [of] the gravity of the situation at half-time and they responded beautifully in the second half, particularly in the last quarter our tackle pressure was the best it’s been all year.”

Boolarra responded to the challenge thrown at them by Thorpdale, keeping their composure under pressure to win their third game of the season, 9.9 (63) to 7.9 (51).

The Demons managed to claw a narrow lead at the first change but Thorpdale’s four goals in the second quarter showed they were well and truly in for the fight.

The win by Boolarra has them equal sixth on the MGFL ladder, just two games out of the five, albeit with a very low percentage that would make finals footy improbable.

“It was a tight opening quarter with the boys getting on top late and the next three quarters were much the same, with Thorpy not giving in,” Demons coach Tony Giardina said.

“It was good to get this win, especially this time of the year, with lots of injuries. The club is heading in the right direction with our twos in the five at this stage.”

Newborough showed improvement was on the way, but it wasn’t enough to overcome an impressive side with the Tigers winning on Saturday, 14.13 (97) to 9.5 (59).

The Tigers had more of the ball in the opening quarter but inaccuracy proved to be a problem with two goals from seven shots giving the visitors just a nine-point lead.

That margin may have been extended to three goals at the main break but it was obvious the Bulldogs were starting to work their way into the game.

Newborough were well and truly in touch in the final term, trailing by just 17 points.

The depth of talent from the Tigers and the performance of key forward Kris Berchtold with seven goals helped them overrun the Bulldogs and run out six-goal winners.

“Our boys stood up to some serious pressure from Newborough and eventually prevailed,” Mirboo North coach Josh Taylor said.

“We are not playing the best footy over the last three weeks, so we need to hit the track and get back to where we were at.”