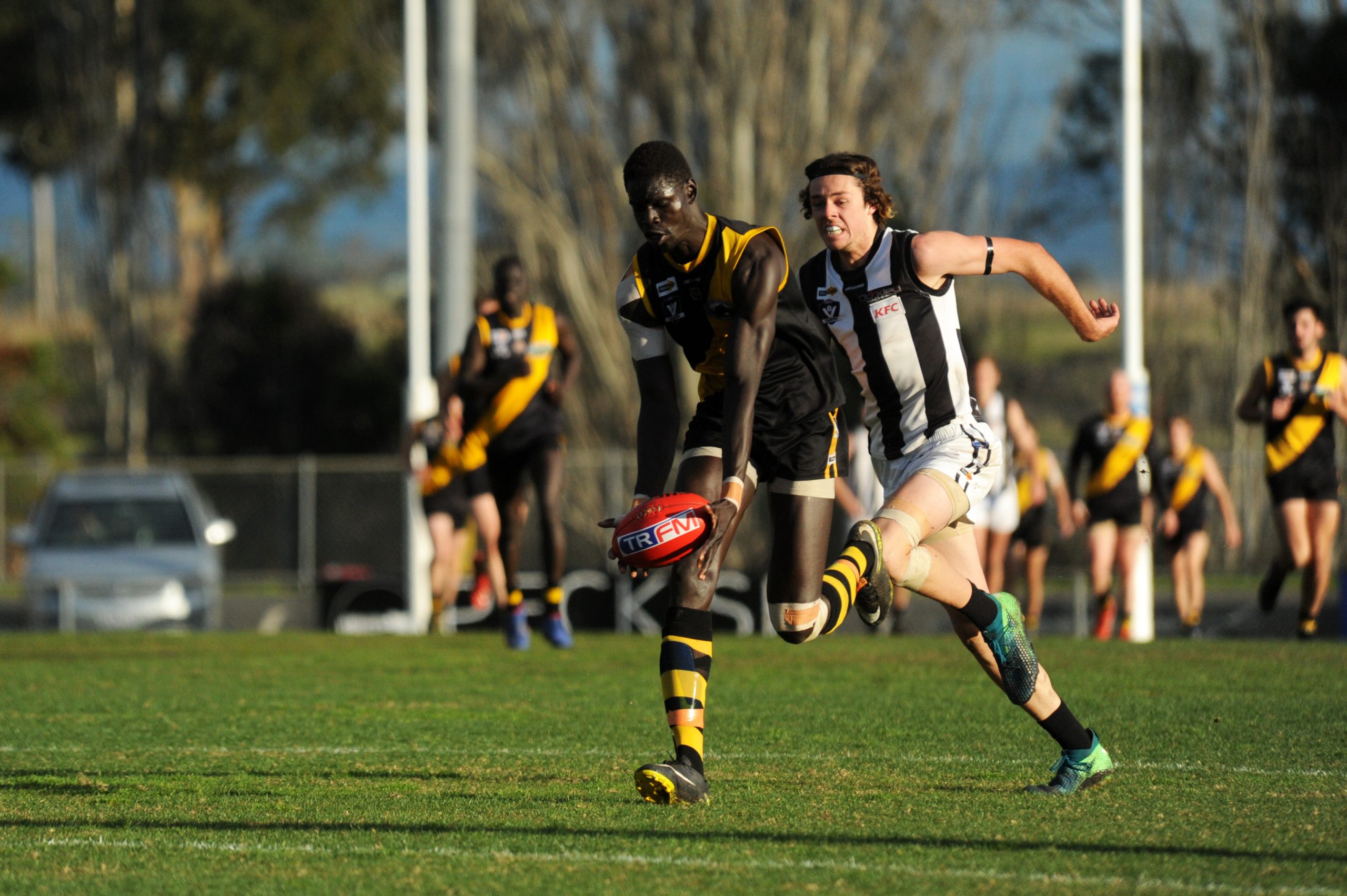 In positive signs for Morwell, the Tigers well and truly held their own against ladder-leaders Sale in round nine at the weekend before being overrun in the second half, 13.5 (83) to 8.11 (59).

A blistering opening quarter for the home side had them in front by 14 points at the first break.

Their lead was cut back to just two points at the main break before a straight-shooting Magpies side stacked on five goals and one behind in the third term to overturn the deficit and lead by 20 points at the last change.

The experience and run of Sale came the fore in the last term, the ladder leaders holding off the Tigers to notch their eighth win of the season.

Brad Dessent, with 10 goals last weekend, was limited to three majors for the day for the Magpies, as was Jarrod Freeman.

Tom Hams was the other multiple goal scorer for Sale with two while Jordan Dessent, playing-coach Shane Fyfe and Will Leslie were among the best.

Defending premiers Leongatha bounced back from consecutive losses at the weekend with a clinical win over Bairnsdale on Saturday, 20.8 (128) to 10.6 (66).

The Parrots wasted no time asserting their authority on the game, bursting out of the blocks with seven goals to the Redlegs’ one in the first term to earn a handy 32-point buffer at the first change.

Their lead was increased by just a point at half-time and stretched out to 38 points at three-quarter-time.

In a pleasing return to form, the Parrots saved their best term for last with seven goals and one behind helping them run out 62-point victors.

Lachlan Wright was a standout in his best performance for the season with six goals while a trio of others – John Ginnane, Nick Nagel and Chris Dunne – each got in on the action with three majors apiece.

Among the best for Leongatha were Chris Verboon, Colin Sanbrook and Cameron Olden.

The Maroons were up by 13 points at half-time and had opportunities in the third term to put the game to bed with six scoring shots but didn’t convert any for goals.

Maffra came storming home in the final term, piling on eight goals while holding the Maroons to just one to snatch an unlikely victory.

Gun Mitch Bennett was at his best and finished with four goals for the Eagles while John Butcher and Jack Johnstone scored three each and Andrew Petrou two.

The first quarter was an arm wrestle and Warragul had the lion’s share of the ball but squandered opportunities on goal, ending the term with one goal and five behinds to Moe’s two goals, one behind.

The Lions made the home side pay in the second term, adding eight goals to their tally to tear out to a 28-point lead at the main break.

Their lead built to 37 at the last change before a seven-goal final term helped them run out 71-point victors.

Dylan Farrell kicked five goals for the Lions in the win while Ash Dugan and Thomas Long kicked three apiece and Bernie Vince and Peter Ainsworth two each.

The Power had chances to assert themselves early but their four shots on goal amounted to nothing with a goalless first term while the Hawks scored three majors straight.

A two-point lead at half-time was increased to 30 points at the last change before Drouin held off the home side’s run to finish with the points.

Bailey Beck kicked four goals for the Hawks in the win while Rhys Salter and Todd Beck kicked two each.

Among the best for Drouin were Ed Morris, Bob McCallum and Liam Anderson.