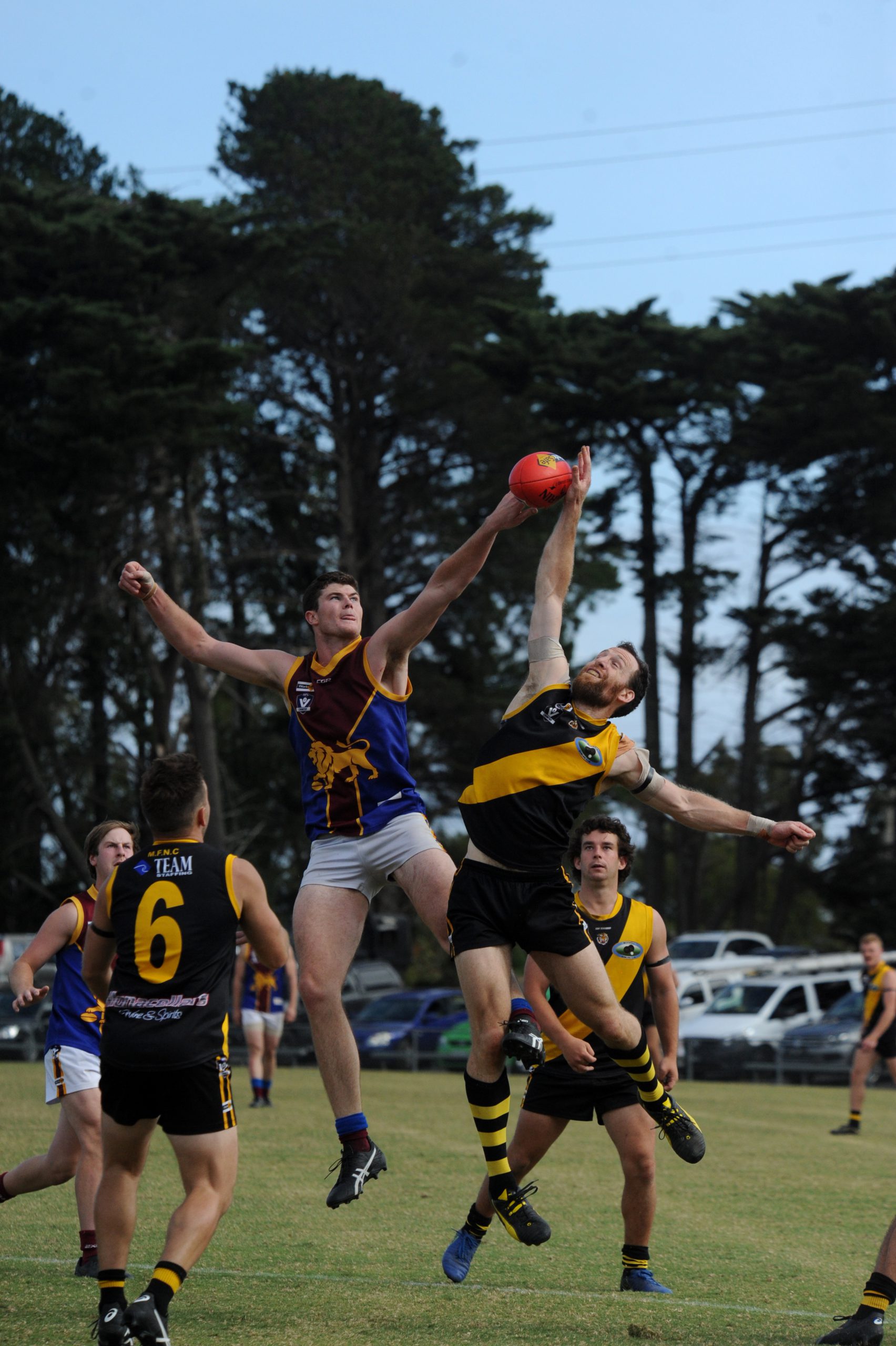 Morwell head into this weekend’s clash with arch rivals Moe with their backs against the wall after five straight losses, but their most recent, to ladder leaders Sale, did no damage to the Tigers’ confidence.

Morwell had the edge over the Magpies for the best part of the game in round nine, but squandered their half-time lead, succumbing to the run and carry of the experienced Magpies in the third and fourth quarters.

Dan Musil was again a standout for the Tigers and and will be pitted against 202-centimetre Dylan Farrell in the ruck this weekend – a duel that could play a large part in deciding the result.

Farrell had his own footy in the Lions’ round nine demolition of Warragul and not only dominated at the contest but fulfilled the swing role that makes him so dangerous and bagged five goals to lead the scoring.

Even more worrisome for Morwell is Moe’s seemingly endless list of avenues to goal.

Eleven Lions players found the scoreboard at the weekend, five of them multiple times.

When the sides met in the season-opener Morwell were no match for the bolstered Lions, with star off-season recruits Spencer White (three goals) and Bernice Vince playing their part in leading their new side to a commanding 46-point win.

Moe will host Morwell this weekend at Moe Recreation Reserve from 2.20pm.

There is plenty to play for in this weekend’s 2018 grand final replay between Maffra and Leongatha with one win separating the two on the Gippsland league senior ladder.

The Parrots find themselves in unfamiliar territory in fifth spot with five wins but are just a game off the pace of the Eagles in second.

Round one’s grand final replay was a somewhat one-sided affair, with Leongatha setting the tone with a three-goal-to-none opening term and leading at every change.

Since then, however, the Parrots have dropped games to Wonthaggi, Warragul and Moe while Maffra’s most recent loss came against a much-improved Drouin side a fortnight ago in round eight.

In-form side Drouin will travel to Traralgon this weekend in search of their fourth consecutive win.

The Hawks have been the surprise packet of 2019 for many and kick-started their season with a 15-point win over this weekend’s opponents in round one.

They stamped themselves as the real deal in round eight a fortnight ago with an impressive 38-point win over powerhouses Maffra.

It took Traralgon five rounds to get off the mark, their losing streak coming to an end with a 14-point win over Wonthaggi.

The Maroons, however, showed flashes of form in all three of their first rounds.

They were edged out by Drouin by 15 points, Leongatha by three points and Moe by eight points, respectively.

Warragul will look to scrap their way off the bottom of the ladder this weekend when they host Wonthaggi.

Aside from a somewhat fluky one-point win over defending premiers Leongatha in round three, Warragul have failed to find the same form that saw them finish just outside the five in 2018.

The Gulls notched a six-point win over Morwell in round six but followed it up with a demoralising 60-point loss to Traralgon at Western Park the following week.

For Wonthaggi, sitting in eighth spot with three wins, this weekend will bring back fond memories of round one when they made a meal of Warragul and recorded a 39-point victory to kick-start the season.

Bairnsdale face the unenviable task of taking on ladder leaders Sale this weekend.

The Magpies have strung together six consecutive wins after a 74-point thrashing at the hands of Maffra in round three seemingly spurred them into action.

Brad Dessent looms as the most dangerous option up forward for Sale and bagged 10 goals against Wonthaggi in round eight to sit nine clear atop the league leading goal kicker table.

Bairnsdale made the most of their trip to Sale in round one but were pipped at the post by three points after leading by the same margin at the last change.