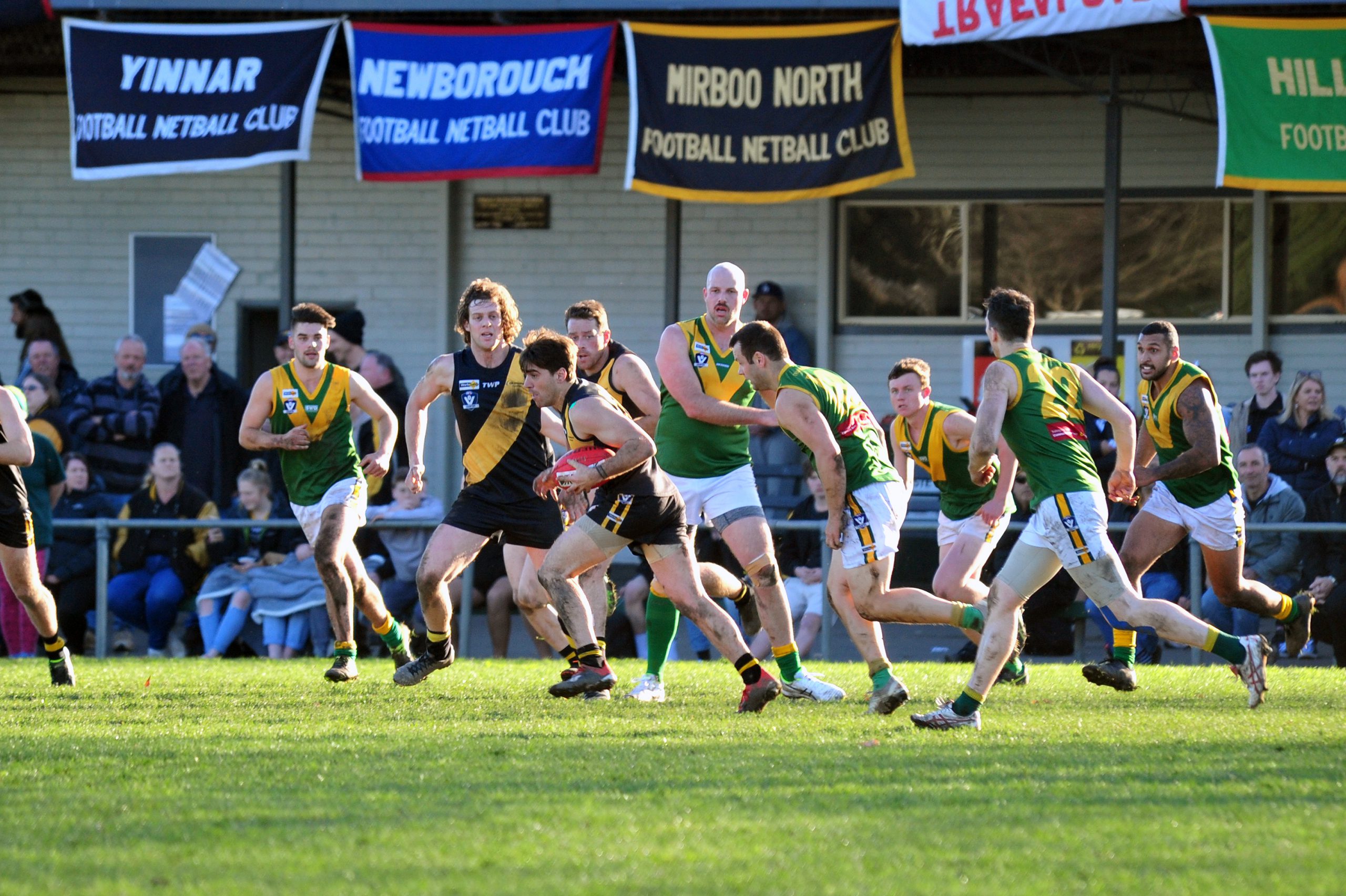 In one of the most thrilling MGFL finals in recent years Hill End finished in front, defeating Mirboo North 11.6 (73) to 10.12 (72) in Saturday’s qualifying final.

The Rovers settled into the game quickly and appeared comfortable under the spotlight of a qualifying final, giving coach Mike Santo a sense that his team may have what it takes to take yet another step forward.

They kicked the first two goals and rattled off another five in quick succession which was just what the young side needed to settle its nerves.

Hill End looked comfortable on the big stage but Mirboo North started to surge after taking some time to settle.

However, the Rovers had a nice blend of talent, enthusiasm and discipline, coupled with a sense of occasion.

A 13-point quarter-time lead was quickly reeled in during the second term, with the Tigers grabbing a slender one-point lead at the main break.

At three-quarter time it was obvious this was going to be a final to remember.

Mirboo North had the lead but it stood at just four points and only the final siren separated the two with the Tigers’ lack of discipline proving costly in the end.

“It was a heart-stopper,” Santo said.

“They were on top in quarters two and three but we did enough to hang around. We showed some real ticker in the last quarter – what a game.”

Mirboo North coach Josh Taylor said: “We really only have ourselves to blame”.

“[We were] very undisciplined. We gave away 50-metre penalties resulting in three goals,” Taylor said.

“We had 11 more inside 50s, more shots on goal but at the end of the day they took their opportunities and were disciplined.

“It was a good game of footy [and] Hill End played with spirit and did well to hang on.”

Morwell East played the conditions well, scouted the opposition perfectly and grabbed the elimination final victory they needed to advance further into the post-season with a 15.11 (101) to 11.9 (75) over Yinnar on Sunday.

With the promise of wild weather on its way, taking advantage of the strong wind that greeted these two sides was crucial and Yinnar had the advantage in the first.

The Magpies, however, found it hard to find the goals courtesy of a very strong and well-organised Hawks’ defence.

Playing-coach Kane Grinstead-Jones finally broke the ice with a crafty goal in heavy traffic six minutes in that resulted in a melee of a half dozen players.

It went goal-for-goal. The Magpies’ Jarrod Henderson’s conversion was answered by Hawk Stephen Lambert and so it went for most of the first 20 minutes until Morwell East hit the front by a point.

They added insult to injury through Mangion with his second, a mistake in the closing seconds by the Hawks opening the door for James Shea to walk in an easy goal. Daniel Hutchison made it six straight for the Hawks at the five-minute mark of the second quarter, followed by a free kick and goal to Frank Marks, with two 50-metre penalties paid against the Magpies, and with a resultant major to big Andrew Brown, and then Jay Francis, the pressure was starting to mount on Yinnar.

By half-time the margin had blown out to 33 points and with the dark clouds and wet weather looking ominous in the distance a lead of any sort would likely be advantageous.

Yinnar’s last chance was to be the third quarter.

They needed to get within striking distance using the wind to make a move and then somehow manufacture something special against the wind and the odds in the fourth.

The first task was accomplished – surging forward relentlessly and finally converting more goals than points. By the final break it was just eight points in favour of Morwell East and it was game on.

The Hawks settled as most thought they might and found the finish line with a healthy margin to spare.

The weeks ahead mean the bar gets higher but Morwell East showed they are capable of reaching greater heights as the pressure mounts.