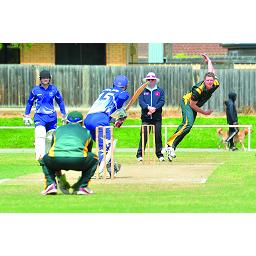 In blustery conditions round two of TDCA cricket produced no real shock results but was highlighted by an incredible bowling performance from TDCA hall of famer Adam Brady who stole the show with a brilliant 7/23 from nine overs.

While in B Grade Ex Students batsmen Dylan Spence made 166 not out and Daniel Chapman made 100 as Ex Students piled on 3/294.

Winning the toss, the Tigers batted first and steadily ground they way to a very respectable 179.

Matt Hibbs was best with 43, Tate Marsh made a flamboyant 41 not out while Shaun Barbour (31) and Chris Lehner (28) also made solid contributions.

The Glengarry lads never recovered and were all out for 70 with Brandon Francis top scoring with 23.

For the Tigers, Brady was outstanding with his incredible line and length bowling to finish with 7/23.

Barbour was also more than handy, taking 2/7 from four overs.

Batting first Rovers got off to a good start of 31, but that was it as the young guns came crashing back to earth against the reigning premiers collapsing to 7/65 before scrambling to 121 all out in the 37th over.

Hayden Willaton held the lower order together with 35 not out, Tom Orpe (23) and Ewan Williams (20) were the other run scorers.

Anthony Scott was the best with the ball taking 3/23, Keenan and Connor Hughes took two wickets each, as did Sam Moran.

Zak Russell guided the Rams home with a well made 56.

Toongabbie winning six down in the 35th over.

Tyrone Bramwell and Liam Little both took two wickets each.

The Sharks have flexed their muscle with a commanding win over Imps despite star leader Lee Stockdale not having any contribution making a duck.

This shows how strong the Sharks are.

Jordy Gilmore was superb with 63, Mat Dyke showed his class with 41, Matt Robertson 40 and Jackson McMahon 27 all did their jobs.

Imps never threatened at any stage against the tight Ex Students attack.