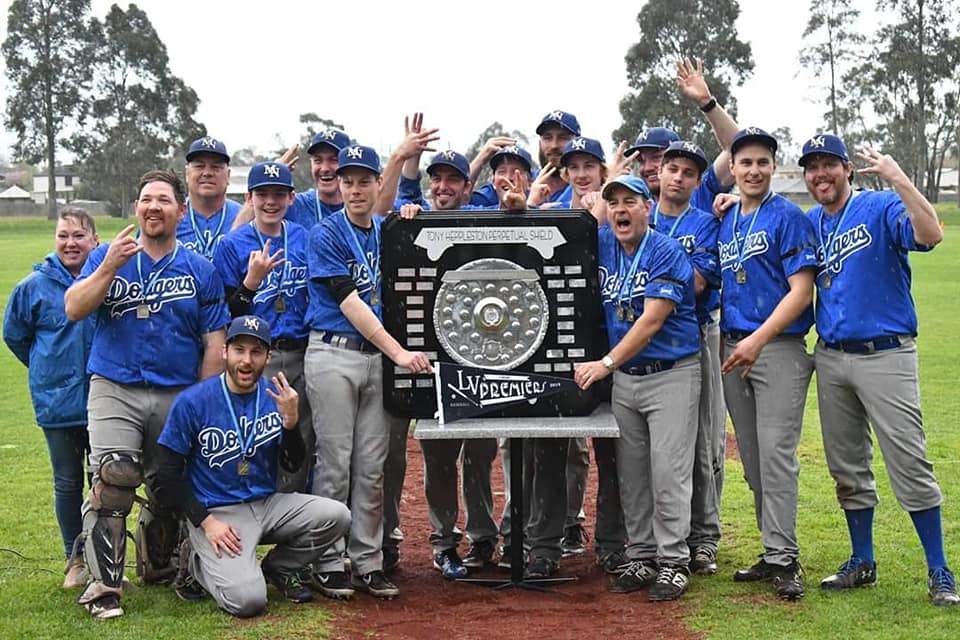 Moe/Newborough Dodgers achieved the rare feat of winning all three senior premierships in the Latrobe Valley Baseball Association with the three wins coming on home soil at Burrage Reserve.

Moe/Newborough Dodgers started the month with a do-or-die clash against Sale Rangers for the final spot in the A Grade finals.

Tim Wilson pitched the complete seven innings for the Dodgers and kept Sale to two runs off of four hits. The Dodgers battery was led by Chris Wendt and Luke Halket who combined for half of Dodgers’ twelve hits of the day.

The Moe/Newborough Dodgers earned themselves a preliminary final spot versus Churchill Braves with the 15-2 win over Sale Rangers.

A poor-showing by the Braves gifted the Dodgers the win and a Grand Final berth against the unbeaten Traralgon Redsox.

The Churchill Braves were only able to convert their eight hits into two runs as the Dodgers showed too strong on the field. Braves’ Ben McCormack hit into a triple-play in the top of the second inning. Dodgers’ then followed up this spectacular play by posting an unassailable nine runs in the bottom frame.

The Dodgers bats fired for 15 hits while the Braves’ error-laden fielding did them no favours. The Dodgers’ Nathan Simpson starred in the box with three hits, two triple, a double and six RBIs.

Moe/Newborough defeated the Dodgers by mercy rule after five innings 22-2. On the back of two big wins, the Dodgers had an air of confidence and a lot of momentum heading into the grand final against the unbeaten Redsox team.

The Dodgers looked to go back-to-back and complete their premiership trifecta after their B and C Grades also won earlier that day. The 2019 LVBA decider lived up to expectations as the two teams put on a classic match of the highest standard.

Traralgon Redsox got an early lead in the first inning and then successfully defended it up until the fifth. Dodgers’ shortstop Benn Zomer got two RBIs as he helped bat his team back into the game and give them a one-run lead. Traralgon quickly answered with a run of their own to tie the game.

Zomer was able to bat in Nathan Simpson to reclaim the lead again in the seventh. Simpson then batted in Halket in the eight to add another run to push the Dodgers’ lead to two.

In the bottom of the ninth, Traralgon Redsox had to score two runs to continue or three to win and were threatening to do so. Their baserunners made the most of their pitches to get themselves on with any means necessary.

Will Brooker hit a line drive to get himself on and then moved to second on Brett Sharp’s ground out. Brooker was then caught stealing third base by Dodgers’ catcher Ash Poxon for the second out.

Redsox’s Matt Robertson was then put onto first base after being hit by pitch. Robertson attempted to steal second base but Poxon was able to unleash a cannon throw and have him caught stealing too to end the game.

Moe/Newborough’s last game of the home and away season, also against Sale Rangers, was for top spot and an automatic grand final berth. The loser would have to play against the Morwell Cougars in the preliminary final.

The Dodgers came out strong and jumped to an early lead. The Dodgers piled on eight runs in the first inning off of Rangers pitcher Tim Hector.

A Sale pitching change allowed the Dodgers bats to silence down a bit before scoring another eight runs in the fifth.

The Sale Rangers were no match for the Dodgers on this occasion as they only scored three runs in the rough outing – sending them to a do-or-die final against Morwell Cougars. The Dodgers secured top spot and a spot in the grand final with an 8-3 win over Sale.

The Sale Rangers and Morwell Cougars preliminary final was a tight game until the fifth inning.

Both teams remained even until this point. Across the fifth and sixth inning, Cougars pitcher Michael Aubrey and his team allowed ten runs to cross for Sale and awarded them the match.

With a 11-1 victory, Sale was set to play against Moe/Newborough one more time this season.

Come the grand final, the Dodgers were quick to get on the board again putting up four runs off of Rangers’ errors. Pitching by the eventual grand final MVP, Dodger Tim Wilson, ensured that Sale wouldn’t be able to catch up.

Wilson was able to collect 8 strikeouts across the day and limit Sale to only one run for the game.

Despite outhitting their opponents, the continuous errors proved too costly for the Sale Rangers as they lost to the Dodgers 7-1.

With a 10-8 win over Sale Rangers, the Moe/Newborough Dodgers were through to play Traralgon Redsox in the C Grade grand final.

McKinnon once again pitched for the Dodgers as Glenn Dunn took the mound for Redsox. Both put in six innings of work for a combined 254 pitches and 16 strikeouts.

The bats for both teams were firing as Redsox outhit the Dodgers 11-10. It was errors that proved costly, however as Traralgon Redsox’s eight errors resulted in seven unearned runs for the Dodgers.

After scoring two and continuing to threaten the lead on the basepaths, Redsox were unsuccessful.

Churchill Braves ran out with both Under-13 and Under-16 premierships after finishing atop the ladder in both grades.

In the Under-13s, Traralgon Redsox defeated Moe/Newborough in the preliminary final to earn the chance to play an almost unbeaten Braves lineup. The Redsox fell to the Braves 8-2. Jarrod Thomas did the weight of the work on the mound for the Braves as he collected 10 strikeouts for the day.

Under-16s also went to the Braves. After defeating Traralgon Redsox in the preliminary final, Sale Rangers were to take on the Churchill Braves. Braves’ Jacob Dickinson and Rangers’ Felicity Clissold each lead their teams with the bat leading to a very back and forth game. Churchill Braves escaped with the premiership off of an 8-6 win.