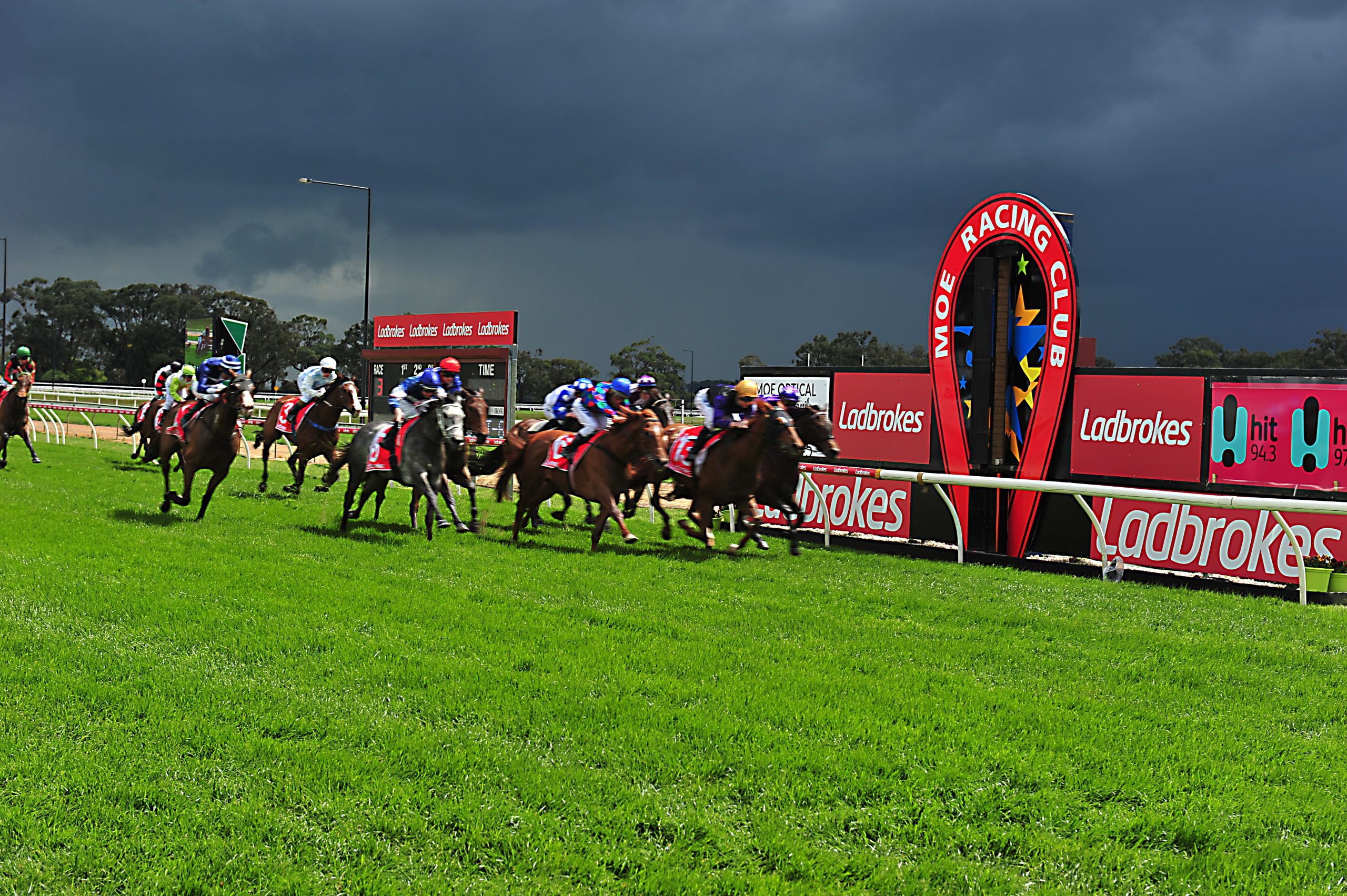 Moe Racing Club was preparing for a family-friendly Festival Race Day, however, the wet weather which is washing through the regions has forced the club to postpone certain off-track activities.

The race meeting is still going ahead, though the aforementioned dreary conditions will still play a part because as of Saturday afternoon, the track is rated as a Heavy 8.

There are seven races on the card, racegoers will hope to get through the full meeting after race seven was abandoned, in similar conditions, at Traralgon last Saturday.

Entry to Sunday’s meeting is free.

The meeting starts off with a maiden sprint over 1217m and there have already been a handful of scratching including La Lucciola who I probably would have penned in as the favourite.

Writeoff is now my top pick. She showed improvement between her first and second run at Echuca. Second-up here and she gets a good draw.

Sebsilk trialled well at Moe in October before an average run at Kyneton on Wednesday. Has shown glimpses so could challenge.

Barossa Kiss has freshened up since a couple of average runs at Kyneton and could feature.

I like Toojay here. The four-year-old has been beaten by less than a length in his last two runs, including on Moe Cup Day where he lost to Patrick Payne’s Glass Ceiling on a Soft 6. Good draw. Ready to win.

Scent Of Fear resumes. She has run fairly in better races than this and could figure. Similar can be said for Reddisun.

Moe-trained I’m A Saint is on debut. Last in two trials, hard to support.

High Hopes is second-up here after a sound second at Tatura on Saturday. Jason Maskiell knows the horse. Average draw and no wet weather form is a concern.

Bonnie Redeem and Molly Dook are two locals featuring in this races. Bonnie Redeem showed positive signs at Bairnsdale on Tuesday in a race at a similar distance. Molly Dook hasn’t shown anything in her eight starts to recommend her here.

Messi Divorce and Notice Me have place potential.

The first non-maiden race of the day will be run over a 1628m and it features several strong chances.

Play It By Ear caught my eye. She resumes after 14 months and has shown some ability in wet weather. The eight-year-old is down the weights and has drawn well.

Annalova needs to improve on recent runs to challenge but she has won a maiden at Moe on a Heavy 9 at this distance in July.

Moe trainer Russell Cluning has Game Up Hardy in this one. He nabbed a second place at Bairnsdale on Melbourne Cup Day but I don’t think he will figure here.

This benchmark 64 looked set to be a tight tussle between Equaletta, Terindah and Testino but with the former two being scratched, I had the latter at my top selection. The three-year-old comes to Moe on the back of a solid wan at Yarra Valley. He won a maiden three starts back and both of his wins have come on heavy tracks.

There are two Moe horses set for this race in Yasey Sun and Nina Rules. With the scratchings, Cluning’s Yasey Sun could contend after being beaten by less than a length at Bairnsdale on Tuesday.

Penny Hickey’s Nina Rules could figure. All five of the seven-year-olds wins have come at this distance – four at this track.

Wilde Gem is one to look at. His two runs on heavy tracks have resulted in wins, the last come at Moe in July over 1100m.

The penultimate race of the meeting is 1017m dash and Sally Sells Shells looks to be the one to beat. Loves the distance and proven on a heavy track.

The Crusha won at the distance in Albury last start but is yet to prove himself in the wet. Here’s his chance.

Moe trainers Paul and Tracey Templeton have Rokurokubi in this race. She’s threatened the placegetters of late, could crack into the top three here.

The day wraps up with an interesting middle distance race with a number of contenders.

New Zealander Holburt showed plenty of determination to finish second on a Heavy 8 at Yarra Valley. Won a maiden out of the third gate at Kyneton three starts back.

The Armani won well at Traralgon last weekend after backing up a Heavy 8 win at Yarra Valley. The 110-race veteran is now going for a hat trick and is worth considering.

Friday Funday is going along nicely. He’s only ever been ridden once on a soft or heavy track which happened to be a Moe back in September. Needs to adapt and the Barrier 1 draw probably won’t be worth anything at this stage.

Chesterton is progressing well this preparation. Raced his best race since winning his maiden last time out at Cranbourne.

Moe trainer Allison Bennett’s Mr Chrisma is involved in this race. He hasn’t shown much this preparation and track conditions won’t suit.