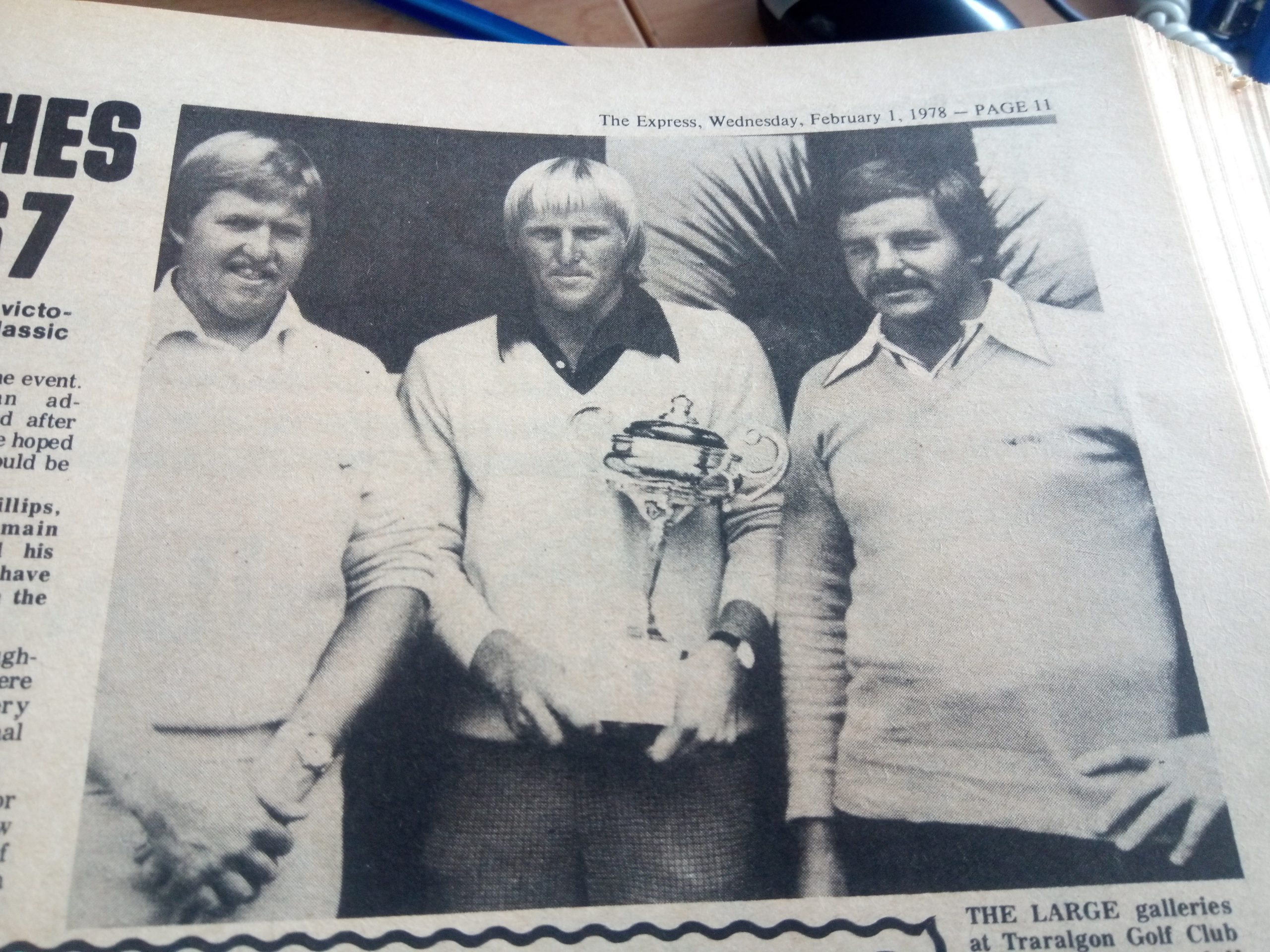 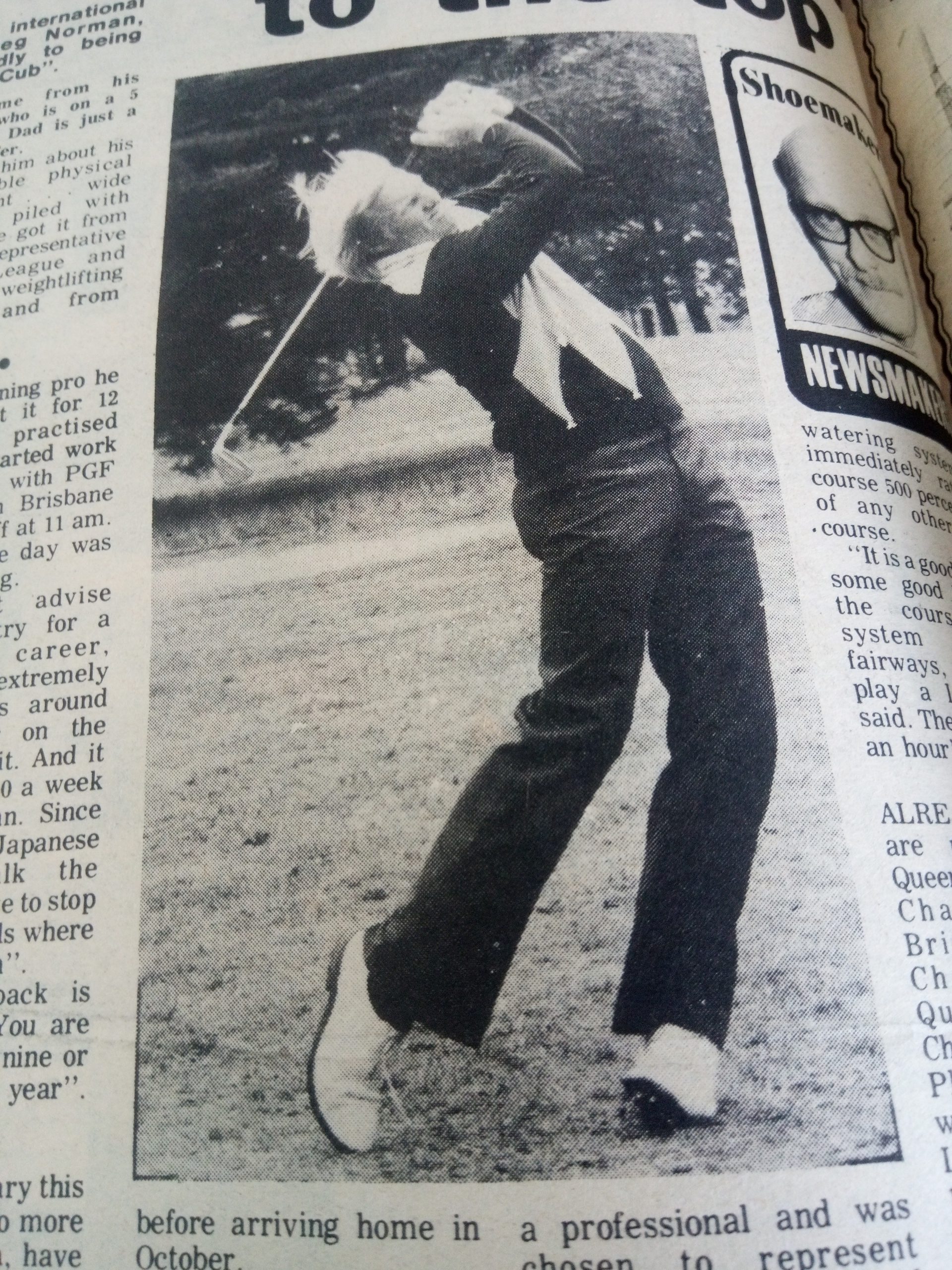 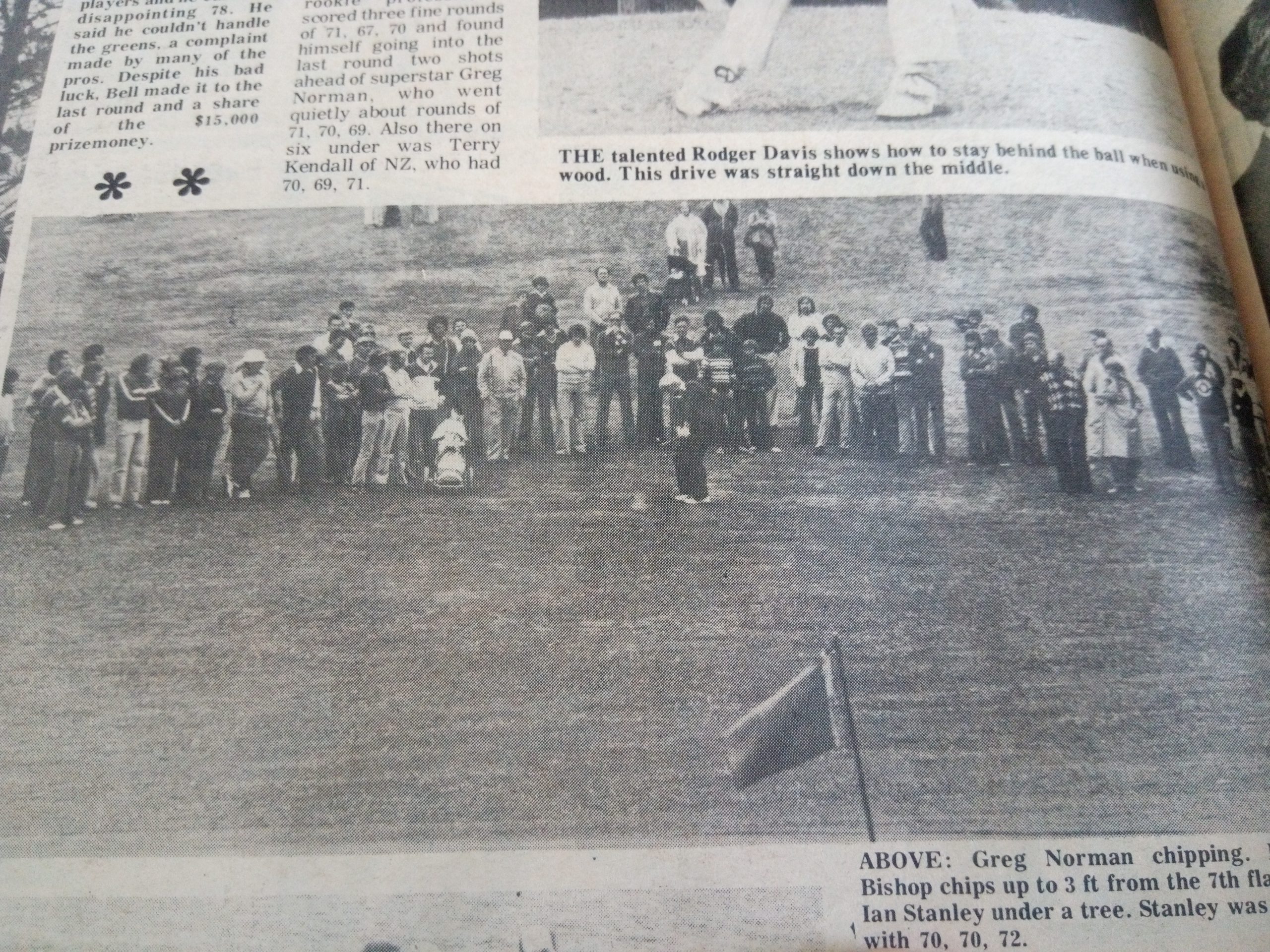 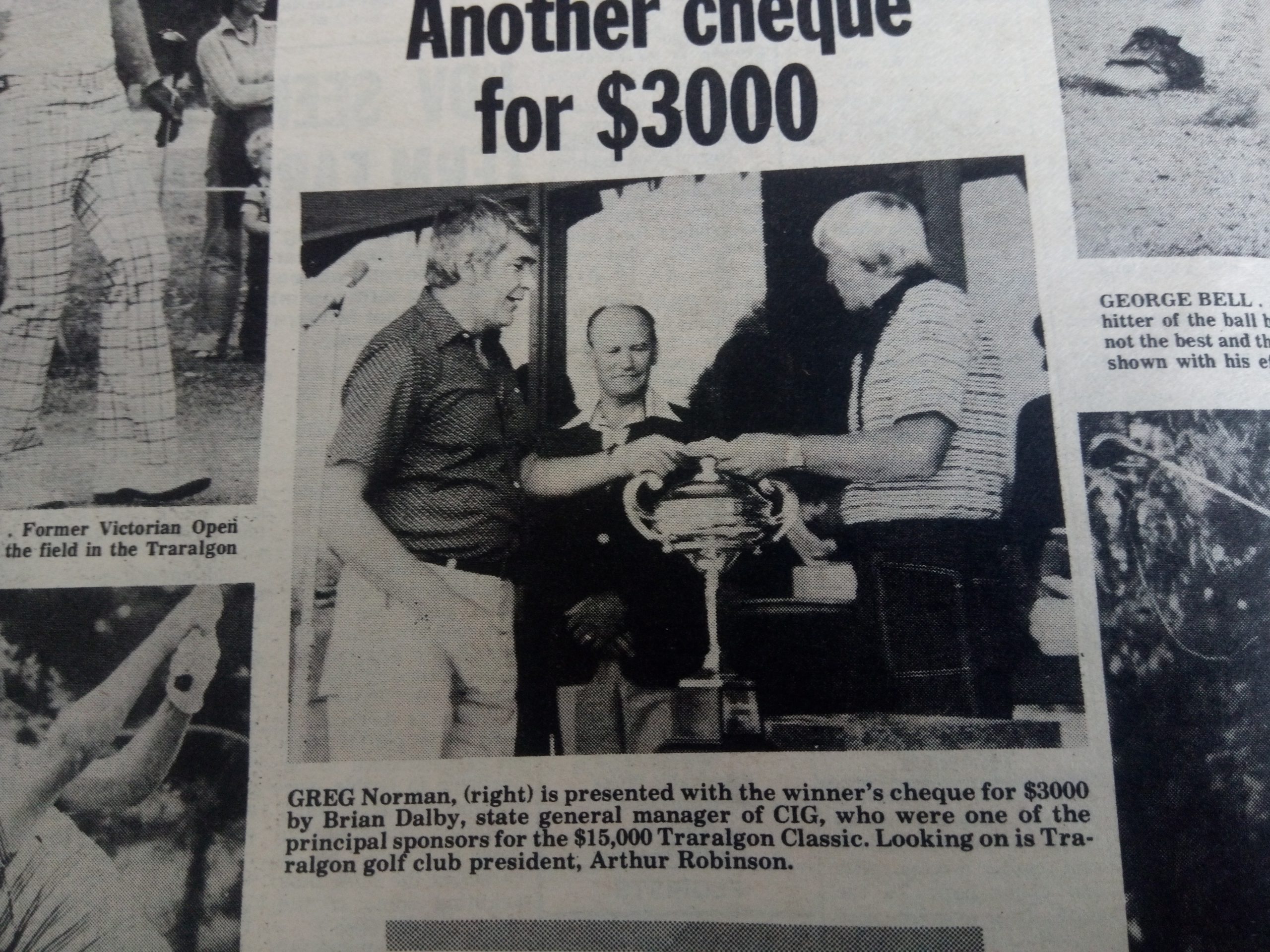 GREG Norman was already known as Australia’s brightest young golfer when he arrived in the Latrobe Valley in late January 1978.

The Queenslander had burst on the scene 14 months earlier when he won the $35,000 West Lakes Classic in just his fourth event as a professional.

“Norman has everything, his legs have been conditioned by football and his shoulders by surfing,” Thomson said in the aftermath of the West Lakes Classic triumph.

Three tournament triumphs arrived in 1977 and in a portent of things to come, all took place overseas.

Norman, 22, brought winning form to the Valley, landing the Festival of Sydney Open courtesy of a record-shattering nine-under par 64 on the final day.

And when he arrived here, Norman’s Midas-like touch continued as The Express reported on Wednesday, February 1, 1978.

Queenslander Greg Norman made it back-to-back victories when he won the four-day Traralgon-Loy Yang Golf Classic at Traralgon on Monday.

The previous week the blonde with the big future won a $20,000 event at West Lakes in NSW.

And he almost blew the Traralgon event on the 18th.

Wracked by pulled back muscles, he used an iron off the tee and sprayed it onto the adjacent first fairway.

He had no shot over the trees and was forced to play an 80-yard shot almost along the ground.

He was then 11 under the card and behind him was Colin Bishop, on 10 under.

Norman sent his caddy off to find out the scores.

The caddy was unable to get the information, so Norman deliberated over his putt for quite some time before rolling it to pin high, 14 inches from the cup.

He tapped in for a par.

Bishop, who had been expected to crack as he had been in the professional ranks only since last November, missed a 4ft birdie putt on 17 and his 20ft curly putt on 18 to force a tie swing away and he tapped in for par.

Norman had wrenched his back on the fourth hole, so his victory was even more meritorious as he had to forgo his powerful driving and had to punch the ball.

The event attracted 79 professionals, including four from the USA.

Some of the scores were ‘hairy’ for professionals, but then the weather played a big part in this.

From the outset the wind blew.

On Saturday and Sunday, gales swept the course and on Sunday night, an inch and a half of rain was recorded at the course.

However, the wind dropped and players came to grips with the course.

For the four rounds, only 22 players had par or better and 28 players missed the third round cut, which was 224 – eight over par.

The unlucky player was Rodger Davis.

Davis finished two behind the winner after a disastrous 76 on Sunday.

He had hit 17 greens in regulation figures, but had 39 putts.

For his last seven consecutive rounds, Davis was 31 under the card. His average is 67.4 shots a round.

Six of the seven rounds he was in the 60s.

The Classic, then in its second year, was hailed as an outstanding success.

Sponsors CIG were delighted, chief organiser Dr Tim Hegarty congratulated on the excellence of the event and attendances described as ‘good’ with a very large crowd on the final day to see Norman’s triumph.

One of the popular columns in The Express of the time was Shoemaker’s Newsmakers, where Karl Shoemaker provided a deeper look at the people behind the headlines.

He shared an up close and personal view of Norman.

And he’s not sure who dubbed him that.

Norman and Nicklaus played together in Australia in 1976 and a striking similarity was seen between the two blondes, so it was only natural for the press to seize on it.

“I don’t like it, it makes me feel I am living in someone else’s shadow whereas I should be known for myself,” Norman said.

He knows only too well that the life is hard and that only hard work will enable him to survive in a profession where a single stroke can win or lose thousands of dollars.

Before turning professional 14 months ago, he used to practice six to eight hours a day, hitting between 600 and 700 balls.

Nowadays, if he’s playing well, he mainly practices his putting … but he still hits around 300 balls a day.

In his 14 months as a professional, he has grossed close to $70,000 in earnings … surely the Golden Bear Cub!

I played with him in the pro-am at Traralgon last week and I can tell you he bears the stamp of greatness.

He stepped out his every shot and recorded the distance and features of the hole in a notebook.

It was his first look at the course and he had a par round.

He putted rather badly and could have easily been six or seven strokes better.

What impressed me above the rest was the manner in which he punches the ball. It is here you see his tremendous power.

Here’s his itinerary this year.

He’ll play two more events in Australia, have two weeks of fishing in Fiji, then go to Japan for the circuit that starts in April.

After that it is off to England to defend his Martini title and play in the PGA.

Then back to Japan and England again, for the British Open.

Europe comes next and takes up six weeks, followed by Japan, Fjii, Japan again and England before arriving home in October.

He isn’t interested in the American circuit yet, but may try for his rookie’s ticket in a couple of years.

“There’s a lot of money to be made on the Japanese circuit,” he said.

Norman returned to Traralgon in 1979 to defend his crown.

He had won the one event in the 12 months, the NSW Open, holding off the mercurial Billy Dunk.

But he was still the popular pick for many people and not for the first time, justified those predictions.

Exciting Queensland golfer Greg Norman yesterday successfully defended the $15,000 Traralgon Classic title with an 11-under the card four round total of 277.

His total round 277 matched his winning effort of last year and was three shots clear of the rest of an impressive field of top Australian golfers.

For Stanley, it was the same old story – it was the 20th time he’s been runner-up in four-round tournaments around the world.

Norman, who has won $28,000 in prizemoney since October last year, was the hot favourite for the Classic and after opening rounds of 69 and 65, an equal course record, a successful defence never looked in doubt.

Although Norman only carded a par 72 yesterday on the 5799 metre Traralgon course, he was pleased with the effort.

“I’m not at all disappointed with the round and I felt I had my game under control at all times.”

Norman collected $3000 for each of his victories in Traralgon and his name adorns the honour board which sits proudly in the clubhouse today.

The Great White Shark would go onto win 88 professional events, highlighted by his British Open triumphs in 1986 and 1993, and earn his place in history as one of Australia’s greatest-ever golfers.