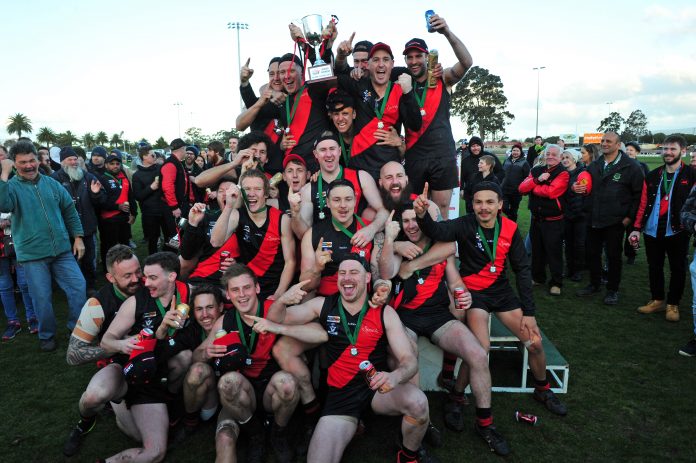 Another domino has fallen in the Mid Gippsland league with powerhouse Yallourn Yallourn North voting to leave the competition.

It comes just one week after Trafalgar was given the green light to depart the MGFNL by AFL Victoria on the back of an appeal.

The Bombers announced their intent to breakaway from the competition on Monday night, ending months of speculation about their plans for 2021 and beyond by confirming they would seek affiliation with the North Gippsland league.

Club president Evan Sheekey said they reached the decision after an extensive consultation process with members.

“We are really excited about the future of our club and progressing our application to join the North Gippsland Football and Netball League,” Sheekey said.

“An extensive research process was undertaken by a dedicated committee, that saw all groups of our club represented, which explored the two league options.”

“After undertaking the research and meeting with both league executives, it was found that North Gippsland Football Netball Club more aligned with our club values and priorities.

“As demonstrated, we are committed to engaging with our members about the future league for our club and will keep them involved every step of the way going forward.

“We are working hard and looking forward to get back out on to the field/court as soon as it safe to do so.”

The vote was passed with 88 per cent of members expressing support for a move to North Gippsland.

MGFNL publicity officer Rob Popplestone said the league executive anticipated the Bombers would apply to leave the competition and was “well prepared”.

“It’s no real surprise given there was every indication the application to North Gippsland was going to happen over the last few months,” he said.

“The executive is working very, very hard behind the scenes to make sure the new league will be in as good a position as possible for the start of 2021, whether that includes Yallourn Yallourn North or not.”

The MGFNL’s 13 other clubs, six of which are newly-minted from the now defunct Alberton league, will now vote on the Bombers’ application to leave.

Popplestone said he expected the vote to take place “sooner rather than later, possibly as soon as Monday”.

“I think the vote is going to be interesting to be quite honest,”he said.

“With Trafalgar I think the general view was that they were a club we definitely wanted to keep and the same could be said about Yallourn Yallourn North,” Popplestone said.

He reiterated the decision by AFL Victoria to green light the Bloods’ departure had set a precedent for future applications.

“But how the vote goes in the wake of the appeal being upheld by AFL Victoria … it will be interesting to see if that plays a part in the decisions made by Mid Gippsland,” he said.

“Is it worthwhile us rejecting the application if it’s going to be rejected? We don’t want to be in a position where clubs can feel they come and go as they see fit.

“There needs to be a commitment by the club and league and commitment to the game from the clubs and the league, and part of that is having some security and solidarity.”

The league also hinted at “significant” work being done to bolster the MGFNL’s junior competitions.

“What’s not known to the general public is that behind the scenes there’s a hell of a lot of work being done to turn what is perceived to be our weaknesses into strengths,” Popplestone said.

“If we can do that, the MGFNL feels as though it can be regarded as one of the premier competitions in regional Victoria.”