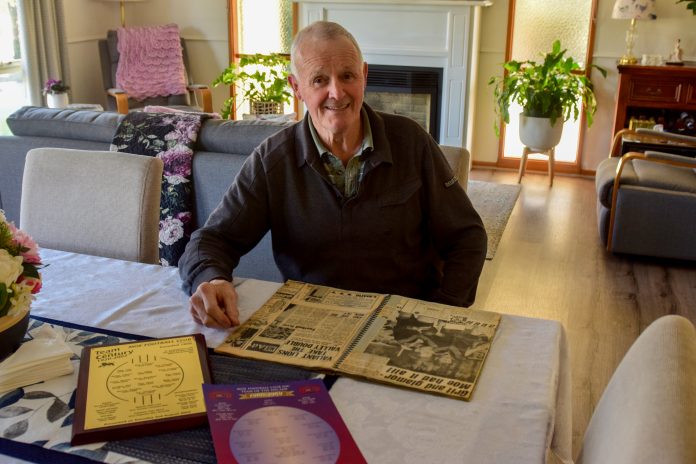 When Gus Eaton and his Moe teammates celebrated their 1967 Latrobe Valley Football League senior flag triumph, little did they know it would mark more than five decades in the premiership wilderness for the Lions.

That day would be the highlight of a sterling 18-year career at Moe for Eaton, who arrived unannounced as a teenager from the Riverina in early 1961.

“I was born in Mildura and my old man was in the army, so we moved around a bit when I was a kid,” Eaton said.

“I went to 10-12 different schools growing up, but we settled in Urana.”

Eaton showed great promise as a youngster and in 1959 at the age of 15 was a member of the Urana-Cullival team which won the Coreen Football League premiership.

“We had a really good side,” Eaton said.

“One of the stars was a good mate of mine Max Urquhart, who played nearly 100 games at Collingwood.

“Max played in that 1959 side, then went down to Corowa and that is where he was spotted by Bobby Rose, who was coaching Wangaratta Rovers at the time.

“He said to Collingwood you’ve got to get this bloke and Max ended up there.”

Eaton’s football career would take a turn when he headed on a holiday to the Latrobe Valley in 1961.

“I came down here on a holiday and stayed with the relatives of a mate of mine Darryl Fox,” he said.

“He had a cousin in Moe, so we came down on the bus, had a good time and I thought I’d stay here.

“I was only 17 at the time and a bloke I ended up boarding with Greg Fox said the Moe footy club was holding its annual meeting.

“So I went down there and was allowed in, the committee said what do you want? I said I’m a footballer and was looking for a job and the next week I started at Saxon’s Timber Mill.”

Eaton took time to adjust to the Latrobe Valley Football League, playing a handful of games at senior level in 1961 and 1962.

“I played the first three games in the seniors in 1962, but got whacked back to the seconds and won the club best and fairest,” he said.

His fortunes and that of the Moe improved with the arrival of Don Keyter in 1963.

“Don came down from Nhill and had played in the VFL with South Melbourne,” he said.

“Moe signed him up as coach the previous year after he played against the Latrobe Valley interleague side.

“He was probably six foot two and played in the ruck and centre-half forward.

“We made the finals in 1963, but Traralgon belted us at Morwell, the mud on the ground that day was six inches deep.”

Keyter would stay at the Lions in 1964 and tried Eaton as a centreman, a role which he enjoyed.

But with Keyter’s departure to East Hawthorn, Alby Law took charge and found Eaton the position where he would thrive most.

“I had a reasonable year in 1965 which was Alby’s first as coach playing centre-half forward and full-forward, but one of the selectors said why not try me on the wing in 1966,” he said.

“So they gave me a go, I dominated the first game I played and stayed there for the next six or seven years.”

In the 1967 grand final, Moe went in as rank outsiders against a Bairnsdale side which recorded 18 consecutive wins.

But having accounted for Morwell in the preliminary final the previous week, confidence was high in the Moe camp and justifiably so as they prevailed 14.9 (93) to 12.15 (87).

Eaton’s recollections of the match some 53 years on are a little hazy and he explained why.

“There was a blue in the first quarter and I was king-hit from behind. All I can remember is the celebrations, we had 12 barrels on the Sunday, but what comes to mind is we had 14 the next year when we got done by Traralgon,” he said.

The 1968 loss would be the first of five grand final defeats for Moe.

Two were decided by a point.

“They called us the Collingwood of the bush by then because we kept falling short,” Eaton said.

“I was captain in 1972 and was a bit surprised to get the job to be honest, but I didn’t change my approach.

“My memory is Traralgon were a pretty good side and had Terry Hunter as captain-coach, it was one of those games that could have gone either way.

“In 1973 we had a new coach Ron Haeberle and we played a bit more of a handball game which worked for us.

“But it didn’t change the result.”

Haeberle remained in 1974, but Moe could not shed the bridesmaid tag, going down to Warragul by four points.

Eaton spent much of the year in the reserves, winning the league medal, but come grand final day was in the Moe side.

With the clock ticking down deep in the final quarter, Eaton swooped on the ball in the back pocket and takes up the story.

“I was like Phil Manassa, I had the ball in the back pocket, ran through the half back line and the wing, bouncing the footy, I’d probably had three or four bounces and got to about 80 metres out from goal.

“As I went to kick the ball to Jenno (Ian Jennings) at full-forward, the siren went, if we had another couple of seconds, we probably would have won the game.”

Eaton remained at the Lions until 1979 when he hung up the boots after a career highlighted by 180 senior games and 159 in the reserves, with his total of 339 club games a record until passed in recent years by Peter Ainsworth.

Eaton’s association with Moe did not end there.

He later coached the club’s thirds, reserves and Under-16 teams before retiring from coaching in 1992.

By then Eaton was also entrenched as the club’s historian, a role first he took on following a bad car accident in 1975.

“It knocked me around a little bit and I was looking for something to do,” he said.

Eaton set about compiling games records for the club, hunting back through league records dating back to the 1940s.

He was responsible for organising life membership awards and memorabilia on display at Ted Summerton Reserve, and played a key role in the Team of the Century celebrations in 2003.

Eaton was named on the wing in the Team of the Century, making up a centre line that also included Jason Shields and Barry Rowlings, who had a storied VFL/AFL career with Hawthorn and Richmond.

The team included a number of Eaton’s teammates from the golden era, names such as Alby Law, Danny O’Brien, Alan Steel, Tom O’Reilly and Max Donelly.

Donelly and Eaton in 1983 raised more than $6000 for the club when they ran from Bairnsdale to Moe.

“We did it as a fundraiser for the club, got permission to run on the highway,” he said.

“We went from Bairnsdale to Sale on the first day, Sale to Flynn, Flynn to Gunns Gully and then Gunns Gully to the footy ground on the last day.

“Ted Summerton was in the car in front of us and Graeme McGowan from 3UL behind us at the time.

Eaton continues to follow the Lions’ fortunes closely and said he is hopeful the club’s senior flag drought can end sooner rather than later, possibly when Gippsland League footy returns in 2021.