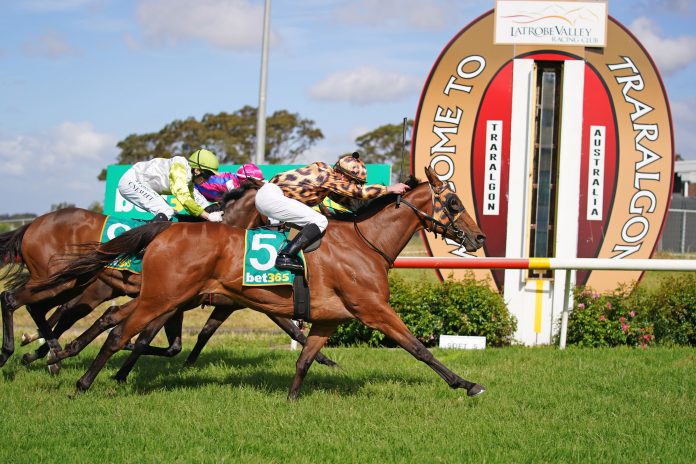 Cranbourne trainer Gavin Bedggood secured the biggest victory of his racing career when No Effort won the $70,000 bet365 Traralgon Cup (1900m) on Sunday.

The six-year-old mare capitalised on a peach of a ride from jockey Daniel Moor to take out one of Gippsland’s biggest races in a time of 2:00.27.

But a post-race protest between third and second, lodged by the connections of Nudge Bar for interference during the concluding stages was upheld, promoting the Moe galloper to second and relegating Lord Bouzeron to third.

Not that it mattered to Bedggood, the 34-year-old former jumps jockey turned trainer, who prepares a boutique team of nine horses at his Cranbourne base.

“I rode a few picnic cup winners during my career as a jockey, but this is my professional Cup winner, it’s a big buzz,” Bedggood told The Express.

“I’ve had a bit of history with Traralgon, it was the first place I strapped a horse when I was 13 or 14, so to win the Cup 20 years later is fantastic.

Bedggood said the Traralgon Cup had been on his radar for the past six weeks and praised the ride of Moor.

“She goes really well on tight circuits such as Caulfield, Cranbourne, Moe and Traralgon,” he said.

“Dan gave her a great ride. There looked good speed on paper and a couple rolled forward. From barrier one, he was able to utilise that early and get her in a good position.

“(Barrier one) probably made the difference between winning and running a nice third or fourth.”

Bedggood has had No Effort for eight of her 35 career runs, having taken over from Allan Cooper, who remains a part-owner of the mare.

“Allan’s been quite unwell, but he’s on the mend and he’ll be rapt with the win,” he said.

“We’ll try and give her one more run this preparation in town, when you get mares in form, you usually like to keep them going.

“She’s been a terrific horse, we’d love to get a bit of black type with her.”

No Effort banked her connections a first-prize cheque of $38,500, which lifted her career earnings to more than $380,000.

The pair matched motors from a long-way out and even at the top of the straight looked like they would fight out the finish.

Savaheat rounded out the first four.

Last year’s winner Prince Ziggy was scratched on race morning and unable to defend his crown from 12 months earlier.