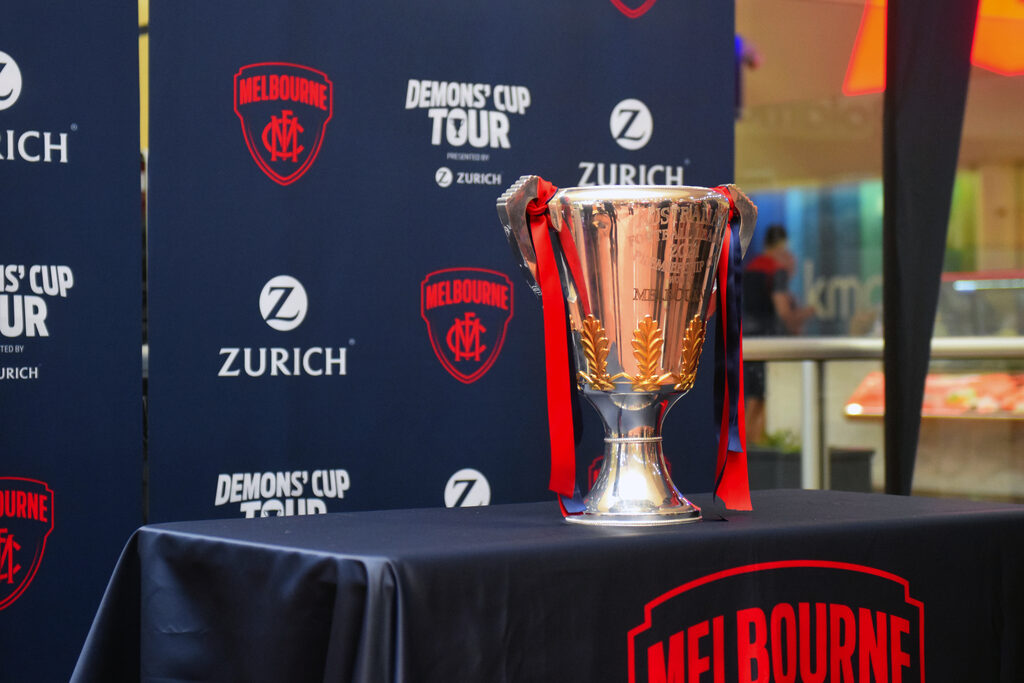 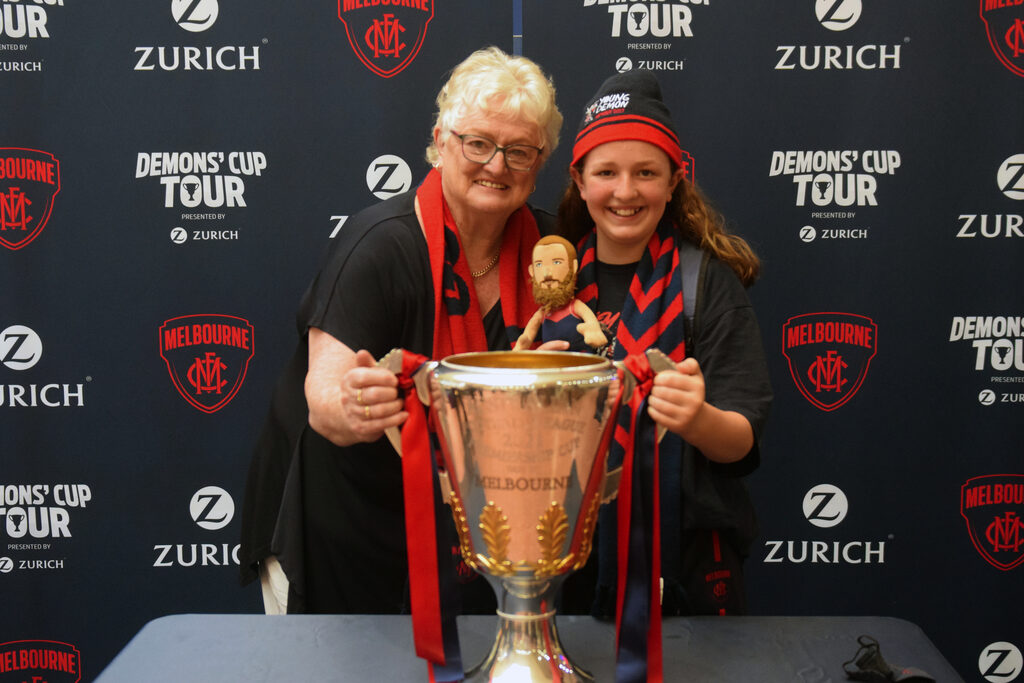 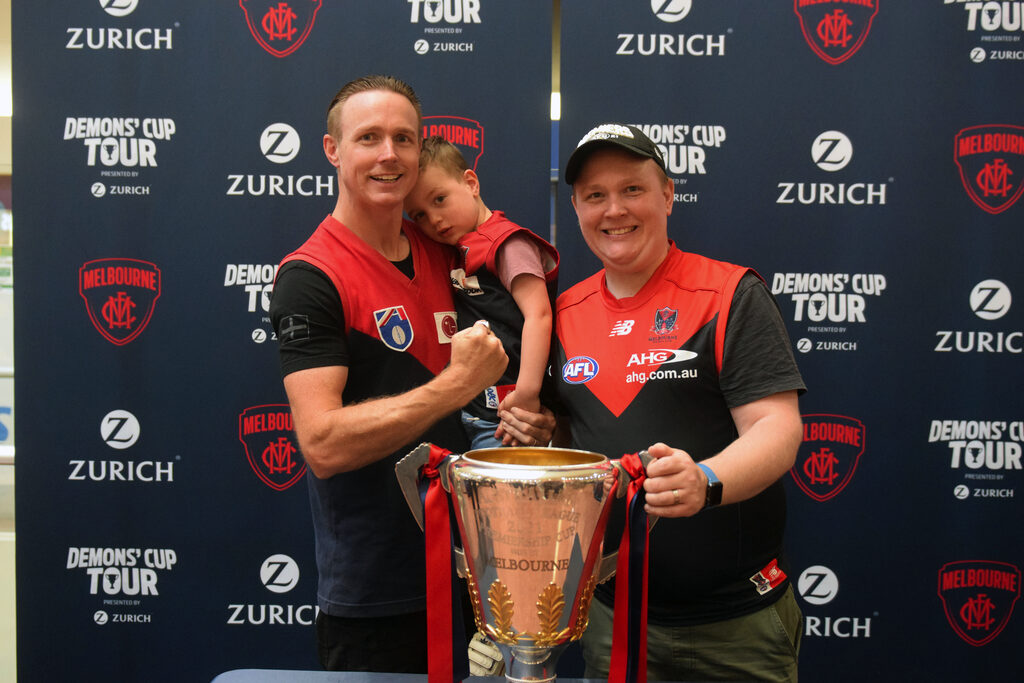 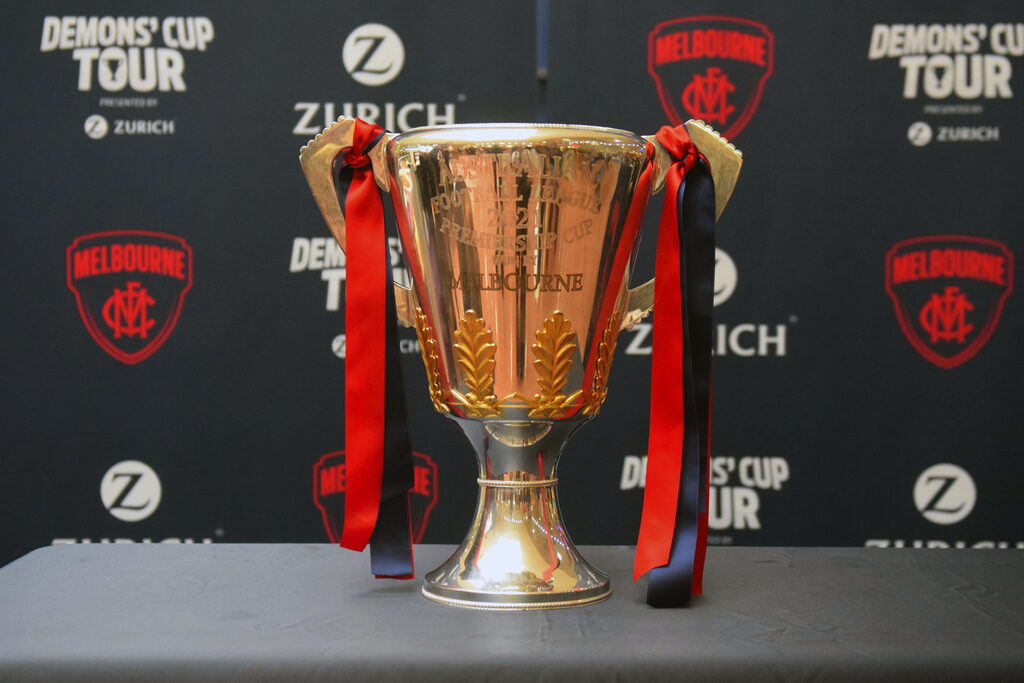 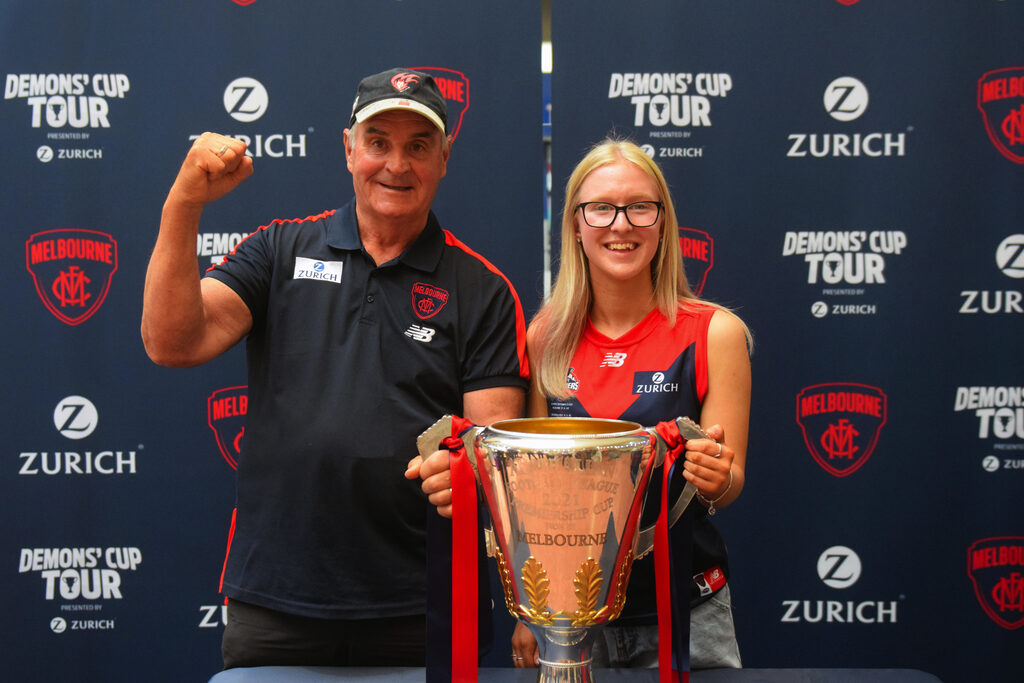 By LIAM DURKIN DISNEYLAND may well have been briefly overtaken as the happiest place on Earth last week, as the Melbourne Football Club brought their AFL premiership cup to Gippsland as part of the ‘Demons’ Cup Tour’. Demon supporters converged on Traralgon Centre Plaza on Wednesday to catch a glimpse of the premiership cup, the very same cup that signalled the end of a 57 year drought once it was held aloft by coach Simon Goodwin and captain Max Gawn in Perth last month. Fans travelled from as far as Lakes Entrance to see the cup in the flesh, and were grinning from ear to ear the moment they laid eyes on the AFL’s holy grail. Supporters from across the generations came decked out in red and blue. Youngsters wore their favourite player’s number on the back of jumpers, while those of an older vintage came bearing old-school woollen guernsey and tattered bomber jackets from years gone by. The number of times those woollen guernsey or bomber jackets have no doubt sat through a game in which Melbourne has been thrashed surely added to feeling that it has all been worth it once in the presence of the premiership cup. It was truly wholesome content as a long line of Melbourne diehards waited patiently to have their photo taken with the cup, with each supporter well and truly lapping up the opportunity to be able to say ‘it finally happened’. Every supporter added to the long list of people who have no doubt felt, held and maybe even drank out of the Demons 13th premiership cup since grand final day, contributing another piece to a story that would indeed be an eye opening one if the cup itself could talk – to think of the places it went and the liquid content it held in the days after the AFL decider. With the word ‘Melbourne’ emblazoned in gold capital letters on the front officially stamping the Demons as AFL premier, supporters coming to Traralgon were left in no doubt that this was the real-deal premiership cup and not some el-cheapo replica. Fans were permitted to lay hands on the cup, although it had to stay planted on a cloth table to minimise the risk of damage. Melbourne staff generously held supporters phones to allow them to get their photo taken, and in a sign of the times, sanitised the handles on the cup after every person had touched it. Although no Melbourne players made the trip down, this did not seem to worry fans, as the chance to see a piece of history was all they needed. Some clearly became lost in the moment, with a group of mates breaking out into a stirring rendition of “It’s A Grand Old Flag” to rapturous applause. Even a security guard standing table-side to where the premiership cup was couldn’t help but smile at that point. Morwell’s Daryl Smith and granddaughter Emmersyn Smith came to Traralgon to see the cup. For the senior Smith, who has been a supporter for 60 years, he said he honestly thought he would never see Melbourne win a flag. “I’ve been there thick and thin, seen them at their best and worst,” he said. “In the grand final I was worried about halfway through the third, but then I couldn’t believe what was going on (when Melbourne kicked six goals in nine minutes).” As well as Traralgon, the ‘Demons’ Cup Tour’ has made its way to Shepparton and will be heading to Geelong, Ballarat and Warrnambool in coming weeks. Melbourne chief executive officer Gary Pert said it was great to be able to connect with supporters, especially after they were denied the chance to see the grand final in Melbourne. “It’s ‘the People’s Cup’ and it was really important for us to share it with as many Melbourne members and supporters as possible,” he said. “Bringing it to the town of Traralgon has allowed us to share in the celebrations with the local community. It’s so special, as it reinforces what it means to all those who are proud to belong to our great club. “We hope today’s visit has brought a lot of smiles to our supporters’ faces.” With a big road trip ahead, Melbourne hopes to get to as many supporters in as many locations as possible. There is however one place the premiership cup won’t be making its way to – Footscray.

Here it is: Maffra?s Marie Daly and 11-year-old granddaughter Jasmine Daly, alongside a doll of favourite player Max Gawn, are all smiles holding the AFL premiership cup. photograph liam durkin

Worth the drive: Matt, Charlie and Brett Boyd came all the way from Beaconsfield and Lakes Entrance to get their hands on the premiership cup. photograph liam durkin