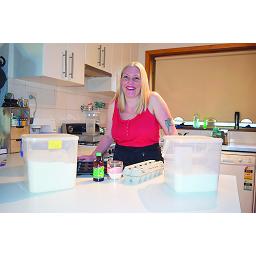 Traralgon resident Coby Mayne isn’t an expert in farming or how to assist farmers struggling with the impacts of drought, but she can bake.

Ms Mayne single-handedly raised almost $400 by baking and selling cupcakes, which she donated to Rotary Australia to distribute to impacted farmers as needed.

Ms Mayne launched a small cake-baking business late last year to earn some “coffee money”, however, decided she could use the platform to raise some money for the cause after hearing about the severity of the drought across Australia.

“I know some dairy farmers down here, but the way I see it is that we all eat fruit, vegetables, dairy and meat,” she said.

“[The drought] impacts everyone.”

Ms Mayne said she posted on her business’ Facebook page about the fundraiser and asked people to comment if they wanted a box of cupcakes.

“I wanted to raise awareness, and people could have some cupcakes and do a good deed,” she said.

Ms Mayne said she would like to do a similar fundraiser again.

“I learnt a lot. If I was to do it again I think I’d do some things a little differently, but it was worth it,” she said