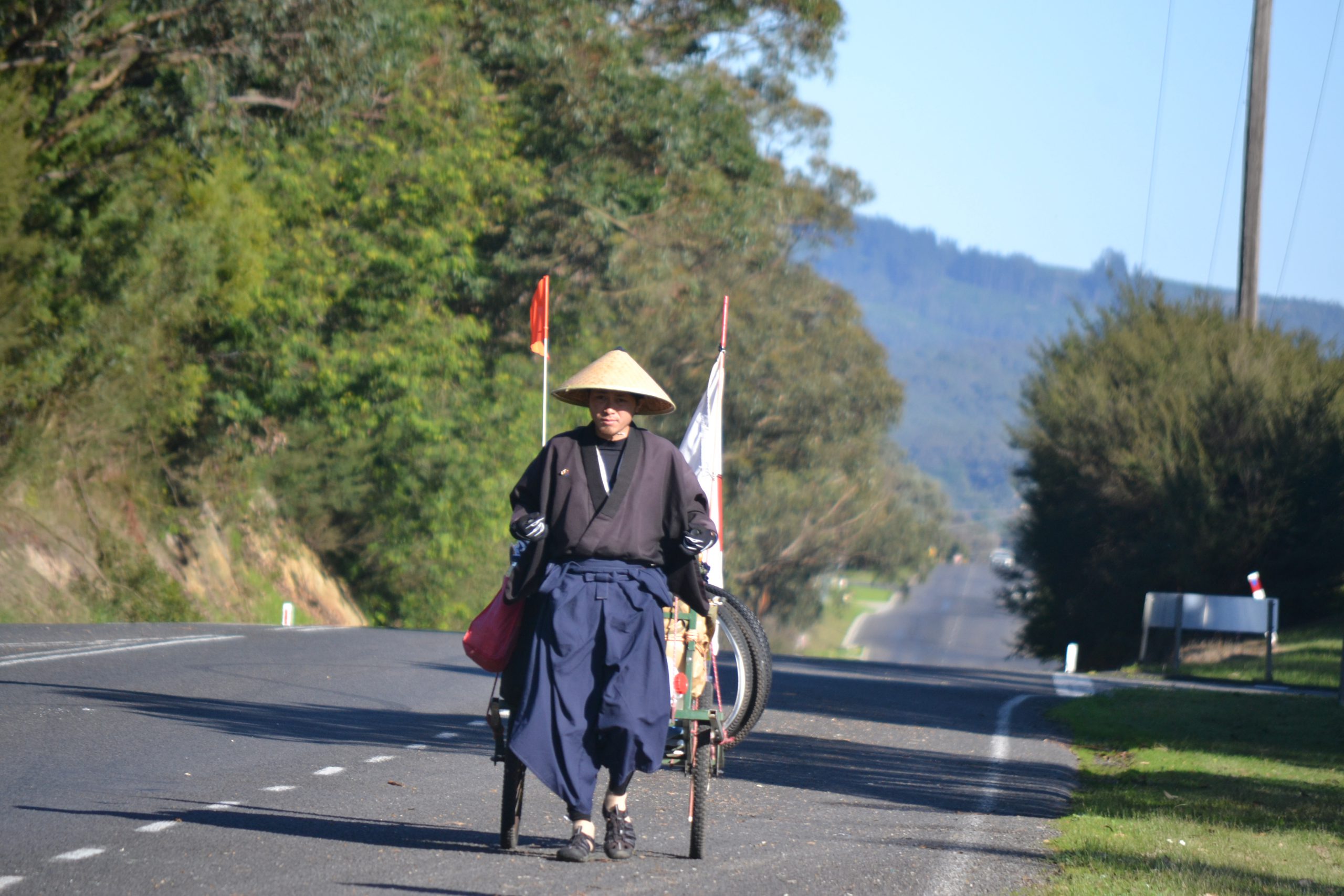 Drivers in Newborough were slowing down to look twice on Thursday, as a rudimentary rickshaw was pulled through town under the banner of a Japanese flag.

Loaded to the hilt with camping and survival gear, kicking along at six kilometres per hour, Yuuichi Iwata was headed towards Yallourn power station on the back route to Traralgon.

Responding to a public tip-off of a bloke dragging the rickshaw “flat knacker” through Moe wearing “ninja pants”, this reporter tracked Mr Iwata down as he headed along Monash Road.

“My legs, they are no good for this,” Mr Iwata said, rubbing the front of his shins, when he stopped to talk.

Loaded with a swag, esky, utensils and spare wheels, it was clear he meant business: trekking from Perth to Sydney to raise money for victims of the devastating 2011 Tohuku tsunami, which killed more than 15,000 Japanese people.

Inspired by a similar fundraising feat in 2011/12, when Jacob French walked the length of the country in Star Wars Stormtrooper armour, Mr Iwata said he had heard his calling.

“When I saw that I thought, ‘I can do this’,” the then-store manager of an American ice cream shop decided, donning traditional Samurai attire for his own fundraising flair.

Mr Iwata said it was the least he could do for Japan’s recovering coastal communities.

“There is still a lot of damage there, not much rebuilding – lots of areas are struggling, people are suffering in silence,” Mr Iwata said.

“I have no friends or family there, but when I visited I was shocked – and decided to help them.”

Embarking from Perth in September, Mr Iwata said he had met “very good people” and witnessed some lovely scenery on his journey.

However ten tyres and three pairs of footwear later, the trip has taken its physical toll; his legs supported by splints and ankle braces.

The four week 1200 kilometre journey across the Nullarbor Plain was particularly challenging.

“I walked 50 to 60 kilometres per day – I was having shin splint problems – it wasn’t easy for me to walk – I was crying with pain, it was a nightmare.”

By the time he arrived in Adelaide in December 2013, his journey hit a pothole; a sponsor had pulled her support for the trip, forcing Mr Iwata to find work in a Japanese restaurant for five months.

Hitting the road again in May, he said he was a day ahead of his amended schedule, hoping to arrive in Sydney on 6 August.

With $800 left in his travel budget – which covers food and accommodation – he’s constantly on the look out for a couch to crash on.

“Many people have been very kind to me,” he said.

However with only $4000 raised, Mr Iwata said he hoped more people would come onboard to fund the cause before the end of his journey.

And his secret to keeping sane throughout the arduous journey?

“I really like thinking. I just think about my life and other ways I can make my life better.”

After boding The Express farewell, Mr Iwata gave a humble sigh, before picking up his rickshaw, and heaving it back into motion towards Yallourn North.

People wishing to donate to Mr Iwata’s campaign can do so by visiting www.beyondwalk.com