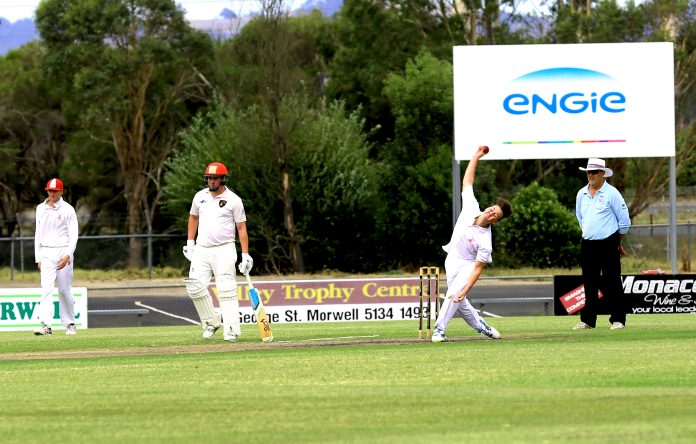 THE finals series of the Latrobe Valley and District Cricket League Premier A Grade competition was thrown into disarray this week following a protest from Morwell Cricket Club.

After Morwell Tigers Yinnar Raiders outright victory over Trafalgar catapulted Raiders from fifth to second, Morwell found itself outside the top four on percentage.

However, Morwell protested the legitimacy of Raiders outright win, calling into question why more overs were completed on day two compared to day one.

Under league by-laws the same number of overs need to be completed on both days for a two day match.

Raiders completed their outright victory over Trafalgar with two balls to spare, while Churchill won on first innings against Morwell.

Ultimately, had Raiders not won outright and gained 10 points in doing so, Morwell would have made finals as Raiders would have only secured six points for a first innings win.

In email correspondence obtained by The Express, Morwell laid out the rationale for their protest, which received support from the Churchill Cricket Club.

“The nature of our protest is that we believe that the MTY Raiders second innings should have concluded at the end of the 34th over, at which time only a first innings result in the match had been achieved,” the email said.

“We are of the belief that this innings should have concluded at the conclusion of the 34th over based on the facts that on day one of the game there had been 89 overs bowled (or parts thereof) made up of 27.5 (28) overs of Trafalgar’s first innings, 42.2 (43) overs of MTY Raiders first innings and 18 overs of Trafalgar’s second innings which were played on day one of the game making up a total of 89 overs for the day’s play.

Morwell also raised the issue of consistency given an earlier season incident involving Churchill and Jeeralang-Boolarra, where the Cobras lost on appeal for playing a designated non-batter and non-bowler.

“Included in this protest is the precedent as set by the LVDCL board from the round two A Premier/A Grade match of Jeeralang-Boolarra versus Churchill on October 23, 2020 where Churchill were advised by the umpire prior to the match that they could play 12 players with a non-batsman/non bowler,” the email said further.

The subcommittee determined while there was an error in calculation from the umpires and scorers, neither team disagreed with the match conditions set out by the umpires, and so the match was played to the conditions.

The first basis for this decision was that MCC laws of cricket states ‘once the umpires have agreed with the scorers the correctness of the scores at the conclusion of the match the result cannot thereafter be changed’.

The second notion was that Raiders based their innings around having 35 overs to bat and the laws of cricket do not allow an over to be removed from the scores after a match has been completed.

On the point of the match between Churchill and Jeeralang-Boolarra being overturned, the LVDCL board agreed that the original result of this match should stand, but this was overturned by an independent tribunal. Following the verdict, which was handed down last Sunday, Morwell submitted an appeal.

The appeal was heard by a three-person tribunal at Peter Siddle Oval last night.

The Trafalgar Cricket Club submitted correspondence to the tribunal, stating captain Rhys Holdsworth agreed to play the number of overs stipulated by the umpires in Raiders second innings on the basis he was happy to accept their calculation and respect their position as the controlling officials.

As the outcome of the tribunal decision could potentially have huge ramifications on the final placings, it was impossible for The Express to write a preview of Premier A Grade semi-final matches.

If Morwell was successful in its appeal, it would have finished fourth and Churchill would have secured a home final while Raiders would miss out.

It is believed Morwell did not have overly high hopes their appeal would be upheld, and did not even train on Tuesday.

That being said, it looks as though Morwell have undertaken their appeal on the matter of principle which is sure to win them plaudits in local cricket circles.

Where things could get messy is if another appeal is lodged following last night’s hearing.

If that was to happen, the next appeal would go to Gippsland Cricket Region 7 and then if another appeal is lodged, it would go to the Victorian Country Cricket League who would have the final say.

With finals in two days, players and officials of the clubs concerned have had the worst possible preparation.

The saga has renewed calls to play the last round of the regular season as a one-day game to avoid any possible manipulation of rules and playing conditions.

Teams playing A Grade finals have had a chance to prepare without such a distraction.

Minor premier CATS will host Jeeralang-Boolarra, while Centrals and Moe will play in a rematch of last season’s semi-final.

It is the second match between Centrals and Moe in as many weeks.

Centrals bowled out Moe for just 32 a fortnight ago and sealed outright points last weekend.

CATS, fresh off an outright defeat of its own at the hands of Traralgon West, are strongly fancied to defeat the Panthers.